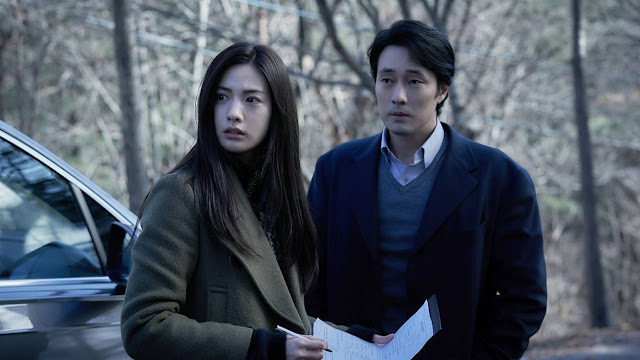 Yoo Min-ho (So Ji-seob, A Company Man) is arrested for killing his mistress, but released on bail as his trial is in progress. Fleeing the prying eyes of the media, he retreats to an isolated, snow-bound cabin to meet with a Yang Shin-ae (Yunjin Kim, Lost), a new lawyer, one who has never lost a case. Over the course of a night in director Yoon Jong-seok’s Confession, Yoo spins his tale, lies pile up, perspectives shift, and true intentions come to light.

The simple set up of one person telling his tale to another belies a complex, taut, twisted account of the crime in question. In a heavily noir-inspired framework, Yoo recounts an escalating series of bad decisions, mysterious coincidences, and outright fabrications, only for Yang to poke holes in his story and have him start again. Through this device, we watch events play out in multiple ways, leaving us, much like the characters, to wonder where the truth rests. It’s a tool that could easily and quickly wear out its welcome, but Yoon deftly employs it to push the characters and narrative forward and turn up the heat and pressure and every juncture.

A high-powered businessman, Yoo isn’t used to losing. He puts up a good front, a solid act he gives to the media, the judges, and everyone watching, playing the desperate man wrongfully accused. But when Yang pops his metaphorical balloon, the mask drops and he’s almost annoyed to have his bluff called and then begins anew, crafting a fresh version of events. Basically, he gets caught lying, then stops and is like, “Fine, here’s what really happened,” only that’s bullshit too. So slips nimbly back and forth between Yoo and the persona he creates with an effortless air, nailing the moral void at his character’s core.

Opposite him, Kim plays the attorney as cold, calculating, and ruthless. But as mysteries unravel and secrets come to light, the truth of her character comes out to reveal that beneath the vicious, stoic exterior swirls a whirling eddy of fierce emotions. It’s a delicate, nuanced performance that evolves and transforms as new reveals offer depth and meaning to earlier scenes. Initially, her push for every last detail appears to be in pursuit of constructing an impenetrable defense for a client, though that drive morphs into something much more.

A cool color palate of muted blues and grays matches the winter chill of the exteriors as well as iciness between Yoo and Yang. But while slick and glossy, the stylistics never intrude, focusing instead on the power struggle between the two key players, basking in the tension of this high stakes game.

As Confession progresses, it tries to get a bit too cute and  maybe isn’t as tight as it would like, but that’s a relatively minor glitch. It’s a crafty, clever noir saga built on a continually shifting base of deception and murder. Driven by two fantastic core performances, it’s a thrilling joy to witness the power struggle between these two, watching each try to get the upper hand on the other. [Grade: A-]