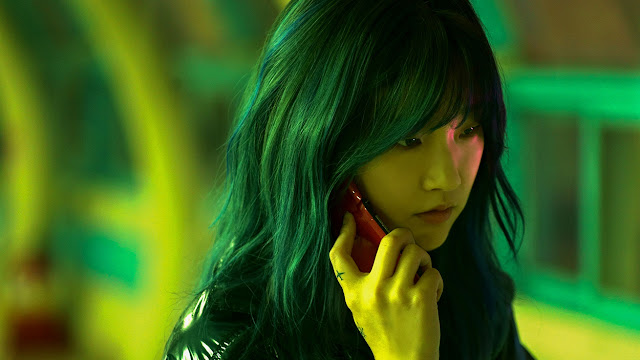 As a concept, writer/director Park Dae-min’s Special Delivery plays like a riff on stories like Drive or The Transporter. A solitary, hot-shot driver, against their personal rules, gets personally and emotionally involved in a job, which upends their life. Though a familiar set up, full of high-speed chase scenes, an escalating mean streak, and a fantastic performance from Parasite star Park So-damn, the film offers up a throttle-cranking action blast.

Jang Eun-ha (Park So-dam) works for a delivery company that specializes in, let’s call them unusual requests. For instance, when you can’t take a Lyft because you don’t want to leave a trail someone chasing you might be able to follow, you call them. And right out of the gate, we see Eun-ha’s got skills, tear-assing around Seoul, inches away from disaster, with a bored expression on her face. When former baseball player on the outs with a crew of vicious gangsters, with his young son Seo-won (Jung Hun-jun) in tow, procures her services, Eun-ha finds herself embroiled in a rubber-burning life-and-death adventure complete with corrupt cops, torture, shady deals, and more.

Special Delivery works best when it stays behind the wheel. From the jump, Park Dae-min makes that much clear. These aren’t the frenetic, over-the-top, physics-defying car chases of the Fast/Furious movies, or drone-swooping mayhem of Michael Bay’s Ambulance. We’re talking about a more grounded style of high-speed pursuit that, at its best, calls to mind car movies from the ‘70s and ‘80s—there are updated flourishes, for sure, but it’s easy to tell where the roots lie. They’re thrilling and visceral, and, most importantly, damn fun.

Things get a bit less engaging outside of the car. Not always, however, there’s nice stuff with Eun-ha and her cranky boss Baek (Kim Eui-sun, Train to Busan), and the two ultimately have a sweet, meaningful bond; and though it can be a bit saccharine, the relationship between Eun-ha and the boy feels earnest and true. Still, the pace drops significantly in the middle when the script crams in a slew unnecessary complication. There’s an aside about trying to find a woman who may or may not be Seo-won’s estranged mother, as well a team of intelligence agents who appear well after the halfway point. These strategies aim to raise the stakes and emotional investment, but by this point they’re already well established, so these moves only muddy things up, especially because they don’t offer any great impact or pay off.

Special Delivery kicks off with a light, breezy feel. Eun-ha whips around, her passengers comically flopping around in the back seat of her revved-up ride. It’s fun and cool and none-too-serious. Then there comes a drastic tonal shift at the end of act one, and from there, things take a much darker, weightier tone. Up to this point, primary villain Jo Kyung-pil (Song Sae-byeok, Mother) has proven himself ruthless, but when he murders a dude with a baseball bat, it sinks in. There’s no real coming back to fluffy and fun from that. This is the moment where everyone sits up and realizes, oh damn, shit just got real. Such sudden, substantial turns can be jarring, but Park and company take the time to lay the groundwork and put the pieces in place so it’s a natural, earned progression, and what follows plays much more dire, not to mention significantly more violent. Let’s just say the film makes excellent use of power tools and leave it to your imagination from there.

In both the action and the quieter moments, Park So-dam definitively shows she has the chops to carry a movie like this. In other hands, Eun-ha could have played overly stoic or as a stock, disaffected Millennial caricature. But Park gives her depth and texture, and more than handles herself when it’s time to throw down. Like with the car chases, the fights play out in realistic terms—when she fights, she fights smart and clever, using what she has at her disposal, getting in and getting out when she can rather than trying to fight fair. More than a fighter, she’s a survivor, and when we learn the details of her story, we see why.

Special Delivery, outside a few momentary rough spots, delivers what it promises, an energetic, propulsive chase movie that, for the most part, keeps the pedal to the metal. Something of a departure for Park Dae-min, who’s previous two films are both period pieces, he could keep making movies like this if he wants and none of us will balk. And if nothing else, this should make us all scream for more Park So-damn-fronted action movies. [Grade: B]

Posted by Brent McKnight at 9:23 AM