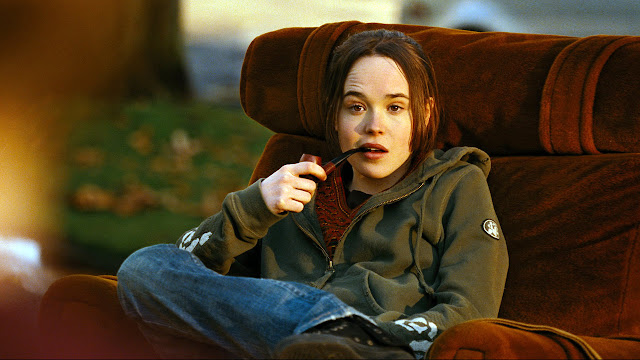 I finally got around to watching this years cuddly indie darling Juno. You already know what it’s about, so I won’t bore you with the details. Yeah, it was cute, and I admit there are some moments where I laughed out loud, and I do love Michael Cera, possibly the most adorably awkward human being alive. This is the kind of movie my ex would be all about for a few months, until the charm wore off and the next super-cutesy, touchy-feely lil’ flick with an annoyingly perky soundtrack came out to obsess over. It tries way too hard to be quirky and mostly just succeeds in being annoying. I imagine there are a lot of funky secretaries who quote this movie and think they’re hip and edgy.

Cera plays his usual disaffected and uncomfortable teen, a role I’m sure he’ll be playing well into his thirties, a role I’m sure I will continue to enjoy. This time, however, he runs cross-country and inhales box after box of orange Tic Tacs.


The other for me is Jason Bateman. I continue to be stoked that he has a post “Hogan Family” career. He plays a skeevy, thirty-something sellout who is married to Jennifer Garner, the worst actress in generations. They want to adopt the titular character’s unborn baby. He writes commercial jingles, clings to the time in ’93 when his tight band opened for the Melvins, and desperately dreams of regaining some sort of rock stardom, or at least a little bit of legitimacy in his own eyes. Bateman is wonderful as a dick who wants to bang a pregnant teen. I thoroughly enjoyed his subtle creepiness.

Oh yeah, the script was written by an ex-stripper, whoop-dee-doo.
Posted by Brent McKnight at 3:49 PM

Jennifer Garner isn't great, but are you honestly telling me she can act more than Jessica Alba? Well, I guess atleast Alba is hot...

And the hamburger phone killed me. I was at least glad that they didn't end it the way I thought they were going to, you know, with everyone staying together. And I loved the scene where the stepmom tears into the ultrasound tech. People can be really, really, awful to pregnant girls if they don't agree with their lifestyles (I have plenty of stories on that one). So all in all, I liked it. But you know what you should see? Baby's Mama. Tina Fey and Amy Poehler should somehow create their own child who will be the funniest baby ever.

You know...despite my best asshole intentions I found myself a bit charmed by this movie. For me the characters that really redeemed the film were Juno's parents. Plus I gained a certain amount of glee from knowing that Juno's dad ate a mouthful of shit in Oz.

Also, promise you won't unfriend me, but I didn't hate Jennifer Garner in this movie. I didn't like her by any means, but she didn't make me want to gouge my eyes out.

That said, carry on sir. I like this here blog and look forward to hearing what you have to say about filmses.

Admittedly, this is Garner at her at her least offensive, but she's still on my list for crimes against humanity.
I did like some of the ancillary characters (Bateman, Cera, and J.K. Simmons is always good), but the protagonist and title character annoyed the shit out of me. In high school she is the girl everyone would have expected me to be friends with, but in real life would have really annoyed me. There are people who are legitimately quirky, and there are people who are trying way too hard to be quirky, and the latter have always annoyed the crap out of me.