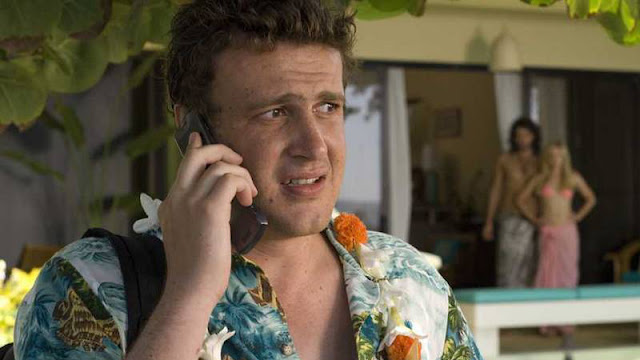 Forgetting Sarah Marshall makes me hate that “Veronica Mars” girl a little bit less. Not because she’s great or hot or talented (she is in fact none of the above). But I now hate her a little bit less just for being involved in this movie in any way.


Jason Segel, my second favorite “Freaks and Geeks” alum, wrote and stars in this bawdy, hilarious romantic comedy produced by Judd Apatow. Now, I’m a sucker for a good romantic comedy, and if you’re a fan of Knocked Up, Superbad, The 40 Year Old Virgin, and the like, you’ve probably already seen this. Good. This shit is funny. You should see it again just to encourage these guys to keep making movies. This movie even made me like Mila Kunis a little bit, and that is something to be proud of.

Segel plays Peter Bretter, a hapless TV composer who somehow wound up dating sexy cop drama star, Sarah Marshall, played by Veronica Mars (and no, I will not be learning or using her real name—I said I hate her less than I used to, but that doesn’t mean my hate has dwindled to the point where I will learn the actual name her parents gave her). She dumps him in one of the funniest break up scenes I’ve ever seen. How can you dump a naked crying man? That’s just cold blooded. Of course there is another guy. Things happen, and Peter, drunk, despondent, and lonely, winds up at the same Hawaiian resort as his ex and her new beau. He cries a lot and drinks a lot of tropical drinks, then falls for the free-spirited hotel clerk played by Kunis.

The story isn’t really important here. You’ve seen a romantic comedy before; you know exactly what is going to happen. He falls for a new girl, the old girl wants him back, things get fucked up with the new girl, everything works out in the end. Only this time the end involves a puppet musical based on the story of Dracula. Yep.

Forgetting Sarah Marshall isn’t as free and loose as some of the movies this crew of fellows has made. There isn’t as much obvious improvisation as, say, Knocked Up. It is more structured, and the story is tighter, but it still has as many, if not more, fall down funny moments as any of the other movies you have in your collection. And the amount of dick shown on screen is pretty impressive. Seriously, I feel like I could be best man at the wedding for Jason Segel’s wang.

The supporting cast is spot on, including Russell Brand as a slimy, long-haired British rock star, and Judd Apatow regulars Jonah Hill as a doting groupie, Bill Hader as Peter’s straight laced step-brother, and Paul Rudd as a stoned surf instructor. Also, keep an eye out for Branscombe Richmond, a.k.a. Bobby Sixkiller of “Renegade” fame.
Posted by Brent McKnight at 7:22 PM