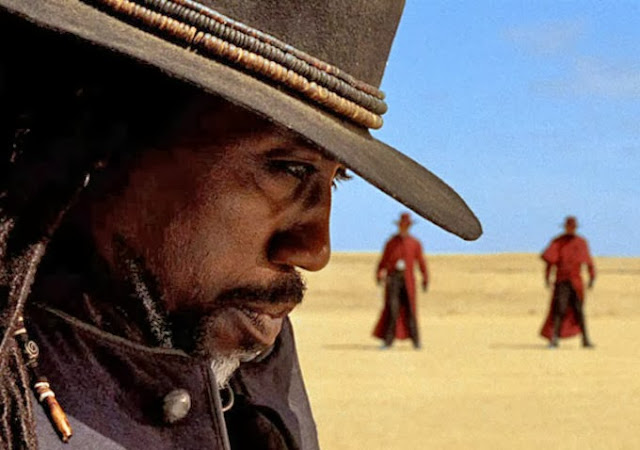 Originally slated to come out before star Wesley Snipes went to prison for tax evasion, director Andrew Goth’s GallowWalkers has finally found its way to your DVD players courtesy of Lionsgate. If Django Unchained was a distant ancestor of Shaft then it’s easy to think of this vampire horror western as a half-assed predecessor to Blade, if Blade was terrible.

The first words Snipes’ character Aman—get it, because he’s a man—utters are, “Do you remember me?” It feels like he’s asking you the audience, not the undead gun-slinging priest with his mouth stitched shut. For most, this question is met with resounding indifference, but I’ve certainly been awaiting your triumphant return, Mr. Snipes. Too bad GallowWalkers isn’t a better movie. We’re not even talking about a terrible movie, it’s just completely bland, which is even more of a disappointment, because the story verges on total, absolute insanity.

GallowWalkers looks and feels like a much older movie, almost as if it’s a relic of the mid 1980s that someone found gathering dust in the backroom of a forgotten low-budget production company. The sets and costumes are cheap and thrown together, there’s a weird new-wave vampire woman, a plastic man with no skin, and at one point an old west version of a Lord Humungous’ post-apocalyptic gang from The Road Warrior, complete with a guy (professional wrestler Diamond Dallas Page) wearing a spike covered iron helmet. You also get a wealth of amazing lines, like when a vampire tells a wayward priest, “Forgive me father for I have skinned,” and a guy who has multiple lizard tails sewn onto his skull. You stare at this movie and the only rational response is, “Huh?”

All of this inspired lunacy could very easily have added up to some kind of fantastic bizarre madness, but the craziness is squandered at every turn. Even with gunmen popping out of blood wells and Wesley Snipes whipping marauders in the middle of a dust storm, GallowWalkers is never more than a bunch of ridiculous moments. And this includes Snipes wandering the desert doing his best impression of Colonel Kurtz from Apocalypse Now. 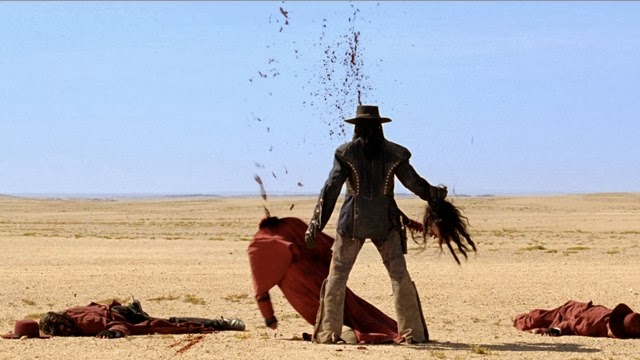 It doesn’t help matters that it takes a full 40 minutes before you have any idea what the hell is going on. You finally learn that the story is all about revenge, but up until then, it’s all needlessly obtuse, obscure, and meandering. Turns gang of bad men raped Aman’s lady friend, sending him on a tirade of retribution. After you finally have some clue, you can’t help but think, what the hell does this have to do with vampires? Here’s what: since this place just happens to be located at the gates of hell, all of the guys Aman kills come back from the dead, so he has to get some re-revenge in addition to his first revenge.

If it wasn’t so directionless, so mired in a needlessly convoluted story, we could be talking about GallowWalkers as goofy, genre mashup classic. But the editing is a mess, and the film is full of pointless subplots. For example, his mother is a prostitute and he was raised in a slaughterhouse; he has a randomly acquired sidekick named Fabulous (Riley Smith), who adds nothing; and there’s another prostitute (Tanit Phoenix), who is in the movie for no other reason you can discern than to add some cleavage. She does practically nothing. And there are more of these asides, but each is even more pointless than what I’ve already listed.

Even the tone is inconsistent at best, nonexistent at worst. GallowWalkers wants to be a grim western and a gory horror flick. Aman does pull off a number of heads, complete with spinal cords still attached, but the CGI is abysmal. But then you get wacky one-liners and a score that, at times, sounds like the music from a sweeping romance. This is the kind of movie where characters don’t have real names beyond a description of what they do like Madame and Apprentice Boy.

There is so much mad potential in GallowWalkers, but the finished product never becomes more than a bunch of crazy nonsense thrown into a blender, poured into a movie script, and strung together through the most tenuous causal links. Great in a theoretical sense, the film is a let down start to finish. But remember, “Dead ain’t what it used to be.”

As slipshod as the movie itself is, you don’t really expect the DVD of GallowWalkers to arrive with the greatest collection of bonus features, and it doesn’t. Aside from a collection of trailers for other Lionsgate movies, the only extra is a ten-minute behind the scenes feature. Comprised mostly of interviews with the key cast members trying to make the film sound more important than it actually is, spliced together with footage from the film, like the movie itself, never amounts to much.

Posted by Brent McKnight at 5:33 PM