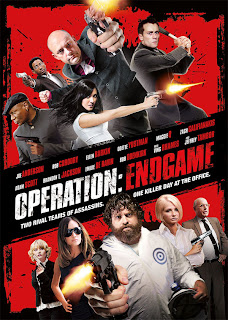 The only name listed above the title that I don’t at least recognize to some degree is Joe Anderson. Apparently he was in the remake of “The Crazies” and “The Ruins”, among other things. Here he plays the Fool, the closest thing “Endgame” has to a protagonist, and it is the first day at his new job. Starting a new job is stressful under the best of circumstances, but when your new job is at the Factory, a super-secret cadre of elite international spies headquartered in a bunker deep beneath Los Angeles and unacknowledged by the government, the normal anxiety gets ratcheted up a few notches.

Within the Factory there are two rival teams of assassins, Alpha and Omega, headed by Empress (Barkin) and Emperor (Odenkirk), respectively, and overseen by the Devil (Tambor). The agents get their code names from a deck of tarot cards. They are very good at what they do, and they hate each other with a white-hot fiery passion.

Eventually someone assassinates Devil, triggers Project: Endgame, the Factory’s lock-down and self-destruct feature, and the agents of Alpha start picking off their rivals in Omega one by one. In the midst of this chaos, everyone scuttles around, trying to stay alive long enough to find a way to escape. That’s a hell of a first day.
“Operation: Endgame” is a haphazard mish-mash of comedy and action. The action is so-so, and there are a couple of decent fight scene, including an excellent use for a paper shredder, but the movie works best when the rival agents banter back and forth, especially when it involves Corddry. You can tell Mikati let him off leash so he could do his thing. If you’re a fan of Corddry’s style of humor then you’ll enjoy his tirades, which aren’t really anything different from his usual shtick, but are by far the funniest parts of the movie.
Throughout “Endgame” there are cut scenes of Carl and Neal (Tim Bagley and Michael Hitchcock). They are watchers. They sit in front of monitors and watch the action in the Factory from the safety of the corporate headquarters. These moments can be pretty funny, their snide back and forth comments on the main action, but their presence doesn’t serve any purpose in the larger framework of the movie. They remind me of the old guys on the balcony from “The Muppet Show”, they watch and remark on the action, but stand apart from it, and in the end feel unnecessary.
While there are some hilarious moments, the overall structure and pacing of “Endgame” has some huge problems, and watching it, you start to understand why a movie with this much star power isn’t getting a wider release.
First of all, it bursts out of the gate like a drunken snail, lumbering forward. There are so many characters that the first thirty minutes is entirely burned with introductions. Corddry carries this part of the film. Without his bitter, foul-mouthed outbursts, the opening act would be torturous and unbearably dull.
All of the different strands and stories unravel and tangle together into mess that hobbles along without any coherent focus. Rhames and Odenkirk are squandered. They each get a decent line or two, but are criminally underused. For that matter, so is Jackson. His only worthwhile line is a Nietzsche quote. Galifianakis, who the kids seem to enjoy, is barely on screen, and when he is he is more annoying than anything else. His character, the Hermit, pops up and mumbles some stupid shit that causes the action to stall just when you want it to keep going. We get it, he’s weird, and borderline mentally handicapped, but that doesn’t make him funny.
The whole thing is a mess. There isn’t even a real direction until about 50 minutes in, and when the plot finally does buckle down and start to progress, it doesn’t become any more compelling.
Like I said earlier, Fool is about as much of a hero as you’re going to get out of “Operation: Endgame”, and he isn’t much of one. Because the story tries to belong to everyone it winds up not belonging to anyone. You never really get to know anyone, so there is barely anyone to root for and identify with.
I won’t give away the end, but I will say this, it’s dumb. The attempt at a twist is obvious, and when it is revealed, you’re going to shrug and say, “I waited for that?”
Initially I wondered how a movie with such an all-star cast could get such lackluster treatment. It got a miniscule theatrical release in LA on July 16th, and the DVD and Blu-Ray come out on July 27th, eleven days later. However, after watching it, I completely understand this approach. There are a handful of moments that verge on brilliant, but as a whole, “Operation: Endgame” leaves a lot to be desired.
The DVD comes with a cobbled together anthology of behind the scenes footage, none of which is interesting, and alternate openings and endings. The alternate opening makes sense, the content would clarify a few things, and maybe justify the ending to a degree, but I understand why it was cut. It isn’t entertaining at all, and if it was the first thing you saw, you might not watch any further. The alternate ending is really just a truncated version of what is in the movie, shorter by a few shots, but not different in any way that matters. All in all, there isn’t much worth watching.
Posted by Brent McKnight at 4:54 PM