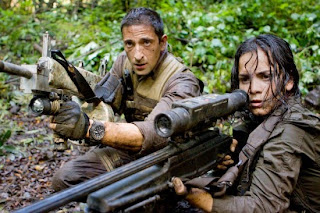 After “AVP:R” crushed my spirits, and on Christmas day no less, I gave up hope of living to witness a decent “Predator” sequel. My wounds still fresh, I’ve been reasonably skeptical as news of “Predators” has trickled in. Sure, I like Robert Rodriguez, and even in his less awesome movies the action is still high quality. This sounded favorable. But Rodriguez wasn’t directing, Nimrod Antal was at the helm, and in my world, this fellow is still an unknown quantity. This gave me pause. I like Adrian Brody, but I’m not sure of his ability as an action star. Laurence Fishburne can go either way. With Danny Trejo you know what you’re going to get, he’ll be badass, but he’s also been good in some horrible crap bombs.