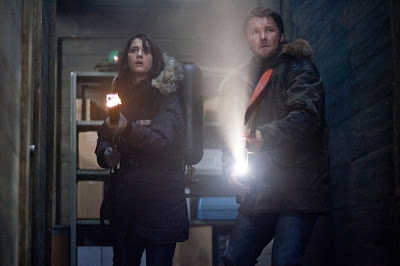 Antarctica is a great setting for a horror movie. You’re in the most remote, desolate, deadly corner of the planet, where the weather can change moods at the drop of a hat, where you can freeze to death before you know it, and where if something goes wrong you’re just screwed, simple as that. When you see footage of the barren, wind swept landscape it’s easy to imagine why Lovecraft set “At the Mountains of Madness” in such a spot, it’s like an entire continent trying to drive you crazy and murder every living thing besides penguins. It is a landscape rife with an inherent tension, a tension that is largely underused by “The Thing”, director Matthijs van Heijningen Jr.’s new prequel to John Carpenter’s 1982 film, oddly enough, also called “The Thing”.

Carpenter’s story about an alien creature that consumes and imitates it’s prey, is all about the setting. The cast of characters, one that most prominently features Kurt Russell and Keith David, is stuck in a remote outpost, being picked off one by one. They’re trapped, they’re not going anywhere, and Carpenter milks that fact for every ounce of anxiety and stress he can. In the newer installment, the people find themselves in pretty much the exact same situation, but you never feel it. Sure they talk about how there’s nowhere to go, but you never feel it in the same way, it is never a concrete, visceral fear. They never come across as that isolated.

It’s really difficult not to compare the two films because they share tons of similarities. Russell’s gruff helicopter pilot MacReady and David’s Childs both have ready made equivalents in “The Thing”—Joel Edgerton, as a gruff, no nonsense helicopter pilot, and Adewale Akinnuoye-Agbaje as his badass sidekick. In fact entire sequences appear to have been lifted directly from Carpenter’s film, which makes “The Thing” feel like it wants to be a remake an not a prequel. So in some respects “The Thing” is much like “The Thing” (for some reason it was really amusing to write that phrase), but all in all, the new film is more about being an action movie than a tense alien thriller. In another instance of “The Thing” failing to capitalize on built in possibilities, when the characters are all together, knowing that one or more of them isn’t who they appear to be, instead of ratcheting up the distrust and apprehension and the “I’m not an alien, how do I know you’re not an alien?” back and forth, the film squanders these chances for cheap, easy scares as a replacement for prolonged friction and atmosphere.

“The Thing” begins shortly before Carpenter’s film, and ends at the beginning of the earlier film—that’ll make sense when you see it. Scientists at a Norwegian outpost in Antarctica have discovered something world changing: a massive alien spacecraft and an alien spaceman, both frozen in the perpetual snow. Because no one will watch a movie where Norwegians are the heroes, a couple of Americans—paleontologist Kate Lloyd (Mary Elizabeth Winstead, “Live Free or Die Hard”) and a research assistant, Adam Goodman (Eric Christian Olsen, “NCIS: Los Angeles”)—are brought in to help with the discovery. It can be a little hard to take John McClane’s daughter and the guy with the eyebrows from “Not Another Teen Movie” seriously as accomplished scientists, not because pretty people can’t be smart, but because they both look like teenagers trying to buy booze with fake IDs. But on the other hand, there is something to be said for Mary Elizabeth Winstead with a flamethrower.

When the alien creature breaks out of the massive block of ice, all hell breaks loose. The beast dopelgangs bearded Norwegians, picking off the isolated explorers and turning them against each other. The Norwegians primarily serve as drunken comic relief, and as warm bodies to be inhabited and ultimately ripped asunder by the monster. It is up to Kate to figure out a way to tell who is real and who is an imitation, with an assist from Carter (Edgerton), the stubble-chinned realist of the group. Ulrich Thomsen does a turn as the head scientist who tries to protect the secrecy of their discovery and insists that no one can call for help, no matter how dire the situation looks.

I don’t want to make “The Thing” sound terrible, it’s not, but it isn’t particularly outstanding either. I walked out of the screening with a shrug, and that’s about it. It’s just average, which is sad, really, because there are quite a few missed opportunities in Eric Heisserer’s script that, while they wouldn’t have made for a great film, could have made it a fun B-style sci-fi horror movie. If you stumble across “The Thing” on cable one night, and if you’re in the right frame of mind, you’ll be entertained, but it certainly isn’t something to rush out and see in the theater. You might enjoy it somewhat more if you haven’t seen Carpenter’s original (which is itself a loose remake of the 1951 film “The Thing From Another World”), or if you don’t have a deeper connection to that film, but even then, “The Thing” will never be more than middle of the road.
Posted by Brent McKnight at 3:28 PM