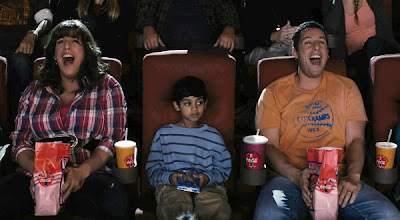 To be completely honest, I’m not entirely sure why I’m writing this. I feel like there are two groups of people in the world with regards to Adam Sandler’s latest film, “Jack and Jill”. First are those who anticipate one of the biggest piles of crap of the year, which, given the previews, seems like the safe bet. The others are those who don’t give a damn how it looks or what you think, they’re going to see this regardless. Either way, minds are made up, and I doubt anything I have to say on the subject will hold much sway. That said, if I can convince just one person, any person, not to see “Jack and Jill”, I’ll have done a good deed. And I’m not saying this because I’m anti-Adam Sandler, I’m saying this as someone who enjoys “Don’t Mess With The Zohan” more than he is proud to admit. That’s where I’m coming from.


Beyond this, I’m also having trouble figuring out exactly who the target audience is. At first glance you assume that “Jack and Jill” is a movie for the gross-out, dick-and-fart crowd, but then you realize it’s rated PG. Not R, not PG-13, but PG. They’ll let anyone physically capable of purchasing a ticket see this movie. I didn’t even know they made straight-up PG movies any more. At the same time, “Jack and Jill” hardly seems like intentional family fare. Sure, there is a family, and the film features a number of holiday celebrations, but aside from that, there’s little draw for that demographic. It exists in a weird middle-ground wasteland, too crude for children, not crude enough for their parents.

Before the screening my movie-going companion and I made bets on how many fart jokes and shots-to-the-groin “Jack and Jill” would contain. We settled on four fart jokes, with three crotch bashings. In the end we were way off on the latter category. No one gets hit in the junk. Who saw that coming? I figured that would be their go-to gag when things needed a pick-me-up. However, we were close on the fart jokes. There are only three, however one of them goes on for—not kidding—nearly five minutes, and I feel like that’s worth at least two.

I don’t know what you expect from a movie that starts out with twins arguing and babies farting in a bathtub, but what follows shouldn’t be much of a surprise. If you’re aware of this movie at all, you know the plot. Sandler plays himself, or at least a close approximation of himself. He’s Jack Sadelstein, a successful commercial director. Here’s the twist, the hook of the film, Sandler also plays his own sister. What? That’s crazy talk, you man say, that wacky Adam Sandler. And oh boy, when the crass, uncouth, obnoxious, Bronx-dwelling Jill comes to visit for Thanksgiving, all sorts of shenanigans ensue.

All Jack and Jill do is fight. The movie is a continual cycle of Jill being unforgivably intolerable, Jack getting mad at her, Jill running away crying, and Jack feeling guilty. Eventually he apologizes and everybody hugs. This sequence of events plays itself out repeatedly. There’s no story, that’s it. That’s all that happens. Al Pacino plays a deranged version of himself who’s obsessed with Jill, but Jack and Jill fight, that’s the movie. When you watch the Thanksgiving dinner scene—which plays out like one of those overly long, space-filler “Saturday Night Live” sketches that they cram in at the end of the show as padding—you wonder how exactly they’re going to turn this concept into a feature length motion picture. The answer is that they one replay that scene over and over again. There are at least three montages in “Jack and Jill”—one of which is, again I’m not kidding, a montage of an old lady getting hit in the face—and halfway through, the film flashes back to events that happened twenty minutes earlier. That was a long time ago, you probably don’t have the capacity to remember things that just happened.

“Jack and Jill” is like a bad joke that just won’t end, and is full of running gags, like the fact that Jill doesn’t know popular movies like “Pretty Woman”, “Titanic”, and “It’s A Wonderful Life”. Jack and Jill have they’re own gibberish language that they made up as children. Jack’s adopted son tapes things to himself. That’s a thing—I hesitate to call it a joke or a gag or an attempt at humor—a thing that keeps happening. First it’s twigs and a saltshaker, but eventually he’s got a guinea pig and a live lobster taped to him. I guess that’s funny? The humor is so bad, so god-awful terrible that Felipe (Eugenio Derbez), the Mexican gardener who is the only character who is even close to being funny—not actually funny, but almost—has to pause every time he tells a joke to let you know that he’s telling a joke. The humor is so subtle, so delicate and clever that you might miss it entirely if it isn’t pointed out. I’m being sarcastic. See, isn’t that incredibly condescending and insulting? That’s the exact tactic “Jack and Jill” uses, and it’s rage inducing.

Here is what I took with me walking away from “Jack and Jill”. As far as I can tell, this is the overriding moral message of the movie. No matter how awful your family is, no matter how unforgivable they are, how obnoxious, offensive, clueless, mean, or hurtful they are… I don’t know where I was going with that, there’s absolutely no substance to this movie, and it makes me question my life choices that I’ve spent this much time thinking about it. The characters are awful human beings with no redeeming qualities whatsoever, but apparently that’s okay and you have no right to expect your family to be anything but atrocious. That’s what I got out of my experience with “Jack and Jill” anyway.