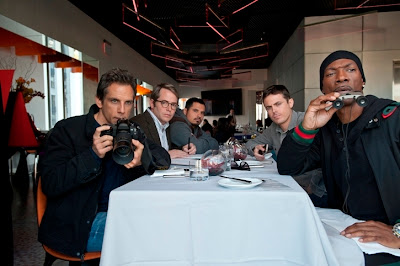 “Tower Heist” is the idiot brother of “Ocean’s Eleven”. While that movie is quick, clever, and fun, “Tower Heist” is empty, plodding, and unencumbered by wit. The movie is an uninspired rehash of caper movie tropes that tries to be quirky only to fail miserably. It is a completely vacuous exercise. You don’t care about any of the characters, the action isn’t particularly interesting, and I spent most of the movie waiting for it to finally be over.


Reading back over the previous paragraph, it sounds a bit mean. As you can probably guess, I didn’t care for “Tower Heist”. But maybe I’m an asshole. A number of friends and acquaintances weren’t nearly as offended by the film as I was, and the lady sitting in front of me enjoyed the hell out of it. She gasped at the appropriate moments, laughed at all the jokes, and pumped her fists triumphantly and cheered where it was expected. So just be warned, if you do venture forward through this review, it will certainly be decidedly negative in tone, and I assume I’m going to come across as a total dick who hates fun. Just wanted to give you a heads up in case you like Brett Ratner films.

Ben Stiller plays a man named Josh Kovacs. Josh manages a high-class New York apartment building called The Tower, the kind of place where the staff caters to the wealthy resident’s every whim, desire, and need, twenty-four hours a day. The courteous, professional staff includes Josh’s sniveling, limp-noodle of a brother-in-law, Charlie (Casey Affleck), Enrique (Michael Pena), a smart-ass elevator operator, and Lester (Stephen Henderson), a wizened, life-long doorman who is about to retire. Josh is good at his job, and takes his duties seriously. He has a genuine affinity for his coworkers, but work is all he does, it consumes his entire life. Even his free time is spent playing online chess with a Tower dweller—Arthur Shaw (Alan Alda), a big-time financial guru.

There is one minor problem in paradise, however. Seems a few years ago Josh asked Shaw, as a personal favor, to invest the staff’s pension fund. Turns out Shaw is a crook, he gets arrested by the feds, and all of their money is gone. The rest of “Tower Heist” is spent with Josh and his cronies figuring out how to get their money back. To this end they enlist the help of Slide (Eddie Murphy), a petty crook who lives in Josh’s neighborhood. Remember when Eddie Murphy was funny? When Eddie Murphy was a reason to go see a movie? Those days are long gone, my friend, ancient history. In a film full of undeveloped characters, Slide has the least going for him. Every word out of his mouth is a cliché, and the attempt to create a back-story between him and Josh is brutally painful.

Taken alone, the set up has potential. But there is nothing that even resembles substance to back any of it up. There’s just a hazy void where anything real should be. I’m about to SPOIL a couple things right here When Lester, who—as you’ll remember from a few minutes ago—is on the verge of a blissful retirement, finds out that his life savings are gone, that he’s flat broke, and hence, unable to retire, he tries to kill himself. It is such a cheap, tacky, obvious move that it comes across like emotional blackmail. This is one of the most heavy-handed tricks I’ve ever seen in a movie, and it may be the moment “Tower Heist” lost me completely.

Director Ratner and writers Ted Griffin and Jeff Nathanson take great pains to frame the story up as a chess match between Josh and Shaw, to the point where you want to scream at the screen, “we get it, it’s like they’re playing chess.” But instead of a meticulous, strategic battle of minds, the plot is full of happenstance and coincidence. Of course Odessa (Gabourey Sibide, “Precious”), the maid, is a world-class safe cracker. Why wouldn’t she be? “Tower Heist” thinks it is being really bright, just whip-smart, but it isn’t. I’m perfectly willing to suspend my disbelief when watching movies, often to a fault, but there are moments in “Tower Heist”, supposed twists, that are absolutely enraging. To the point where I briefly considered leaving the theater I was so mad. Not to mention the inclusion of a tedious romantic angle between Josh and an FBI agent (Tea Leoni).

Honestly the only thing I enjoyed about “Tower Heist” was Michael Pena. The only legitimate laughs in the entire film come from his character, an enthusiastic former Burger King employee, but even he wears out his welcome eventually. The most frustrating thing about “Tower Heist” is that it stars people I though I liked. We’ve already discussed Murphy. Stiller still has the capacity to be funny (I still think “Tropic Thunder” has moments of near genius). I love that Alan Alda is getting high-profile work. But I want to throw Matthew Broderick’s character—another disgraced Wall Street type—through a damn window. He’s obnoxious. You don’t give a rat’s ass about any of the characters, and since you don’t care if they succeed or fail, there’s no tension to maintain narrative velocity. As a result, at just over 100 minutes, “Tower Heist” keeps going and going and going until you want to pull out your own hair.

I don’t know if you could infer this from what you’ve read, but I didn’t particularly enjoy “Tower Heist”. Apparently other people do not share my ire. That mystifies me, but, as a man with my own questionable tastes and lists of movies that I love dearly that are almost universally reviled, I can accept the fact that there are people out there who will like “Tower Heist”. I just think they’re horribly misguided.
Posted by Brent McKnight at 3:11 PM