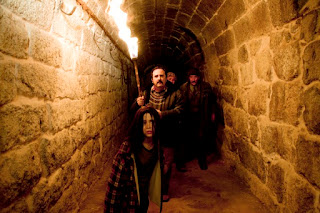 Mixing horror and comedy is a tricky proposition. Leaning too heavily on one element over the other can lead to an imbalance, and too many attempts to synthesize the two genres result in movies that are neither scary nor funny. That’s what makes Juan Martinez Moreno’s “Game of Werewolves” (AKA “Wolves of Arga”) such a treat; it seamlessly blends legitimate laughs with earnest frights and gore.

It’s been 15 years since Tomas Marino (Gorka Otxoa) has returned to his hometown of Arga in the Spanish countryside. Now he’s going back to be honored as a local boy made good. It never once occurs to Tomas that no one has read his book, which is also a critical failure, and that there might be some ulterior motive to the invitation. Tomas is more inclined to play soccer with his dog than actually work or think about the big picture. So he packs up his Jack Russell terrier Vito, and, against his grandmother’s warnings, heads home. Upon arrival he reunites with his pasty, mustachioed childhood best friend Calisto (Carlos Areces), and discovers the horrific secret that haunts Arga and the part his family plays in it.

100 years ago a rich, powerful woman, desperate for an heir, abducted a gypsy performer, forced him to impregnate her, then murdered him and his fellow travelers. Before the last gypsy expired, she placed a curse on the baroness. You never mess with gypsies. We should all know that at this point. They will curse the living hell out of you. But apparently Tomas’ ancestors didn’t watch a lot of horror movies, or they’d have known that. So a werewolf has terrorized Arga for the past century, and the only way to break the curse is to feed the beast a male Marino on the eve of the 100th anniversary of the curse. Guess when that is?

“Game of Werewolves” walks a fine line between splatter and slapstick. Tomas and Calisto have a sharp, quick back and forth, and when Mario (Secun de la Rosa), Tomas’ sketchy editor/literary agent, shows up, the trio constantly cracks on each other as they attempt to unravel the mystery and escape the villagers. There is a classic small-town movie mob, but with shotguns and flashlights instead of pitchforks (okay, there are some pitchforks) and torches, and the werewolves resemble the classic Universal Wolfman costumes. You can’t help but smile at these nods to horror history.

Between blood geysers and wisecracks, the running city versus small town conflict, and trying to escape from the remote village, “Game of Werewolves” actually has a heart at its center. In true horror traditions, the truest monsters aren’t the hairy ones that try to rip out your esophagus. The relationship between Tomas and Calisto goes deeper than just jokes and frights. There is history here, and some wounds remain fresh even after years. And the specter of the Spanish Revolution looms large over the village and the film. The violence and troubles of their collective past hound the villagers in more ways than just a growling, tourist-devouring creature.

The pace of the film keeps you constantly moving from one fiasco to the next. There’s very little time wasted. The situation is set up, characters are introduced, and the troubles commence as the action kicks off. Tomas, Calisto, and Mario, with Vito always in tow, bounce from harrowing situation to harrowing situation, pausing only to cut off a couple of fingers (it’ll all make sense when you watch) before things get increasingly, incessantly worse.

“Game of Werewolves” has all the makings of a great midnight movie, and I hope it finds an audience at the Seattle International Film Festival that helps boost it into the wider consciousness. It is fun, fast paced, and full of schlocky, glorious gore and personable characters that you like and feel for. It seamlessly blends slapstick and splatter, and the end result is a blast from end to end.
Posted by Brent McKnight at 12:21 PM