'Sound of my Voice' Movie Review 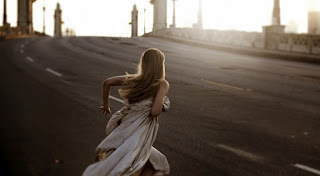 Is “Sound of My Voice”, the latest film from indie princess Brit Marling, an undercover science fiction story masquerading as a cautionary tale about cults? Or is it a story about cults in the guise of sci-fi? A case can be made either way, but I lean towards the former—that “Sound of My Voice” is covert sci-fi. Whichever way you approach, however, this is a quiet, inventive, subtly enthralling little film. Marling, who co-wrote the script with first-time director Zal Batmanglij, delivers a standout performance in this film that does a lot with very little. You start watching only to realize, somewhere along the line, that you’re hooked.

You might remember Marling’s last foray into indie sci-fi “Another Earth”, which I couldn’t stand. Where “Earth” was twee and full of heavy-handed melodrama, “Sound of My Voice” is smart and understated. “Earth” was plodding and slow, and while “Sound” also takes a deliberate pace, it works in this instance. It gives characters time and space, even in a quick 85-minutes, to grow and evolve and develop into complex human beings with a full range of thoughts and emotions. They’re capable of rational thought, irrational behavior, and having conflicting feelings that pull them in multiple directions simultaneously. “Sound” does many of the things “Earth” did, but executes them well, and the end result is an engaging film rather than an off-putting bore fest. It succeeds where that film fails.

Peter Aitken (Christopher Denham) is a frustrated substitute teacher looking for some meaning, for some importance in his life. He’s an uptight control freak who fancies himself an investigative journalist. Along with his reformed party-girl girlfriend Lorna (Nicole Vicius), Peter sets out to make an expose-style documentary about a mysterious, high-security cult that has been gaining some popularity in Southern California. Maggie (Marling), the leader of the cult, claims to be from the year 2054, and, like any good cult-leader, inspires fierce and steadfast devotion in her flock. There’s a group vomit scene, something I haven’t encountered since “Stand By Me”. So good on them for going that way with the story.

If you’ve ever seen a movie about a cult—or one about a journalist getting in too deep, for that matter—you can imagine the trajectory of “Sound of my Voice”. Maggie pushes all of Peter’s buttons, exposing his hang-ups and insecurities, and breaks him down in ways he never thought possible. Before long you can’t tell if he’s buying in or playing along, and you’re not sure if he can distinguish between the two either. Initially the cult seems to be a bunch of silly new agers sitting around in a sterile basement, also looking for their own meaning—there is a childish secret handshake after all—but things quickly take a sinister left turn and you start to discover more and more about the true nature of the group.

That may not be the most original set up—isn’t that the way all movies about cults begin—but the way “Sound of my Voice” handles the material makes it stay fresh and keeps it from becoming a cliché. The focus is more on Peter, Lorna, and their journey, as they find themselves in deeper and direr straights than they could have initially conceived of. At first Maggie asks small, simple things of her followers—like freeing their spirits through spastic interpretive dance—though her tests get more and more difficult as the couple progresses. As they go, Peter finds things about himself that he never knew, shares secrets he’s kept hidden from Lorna, and must face his own personal demons.

The strangeness that captures Peter also captures you, and “Sound of My Voice” takes you along for the ride with him. There are almost endless questions. Is Maggie for real? Is she faking it? Does she believe her own bullshit? Is she herself a victim, a fabrication of someone else, someone with their own disturbing agenda? Like any good story, “Sound” isn’t going to provide you with tidy, easy answers. You’ll have to weigh the facts and decide for yourself, and there are tons of ways to interpret the events of the film. That’s part of the pleasure of “Sound of My Voice”, it trusts you enough as a viewer to come to your own conclusions instead of talking down to you and spoon-feeding you convenient conclusions.
Posted by Brent McKnight at 10:37 PM