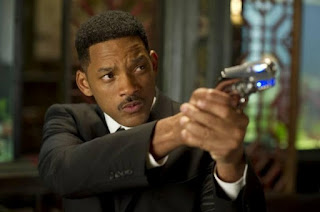 Watching “Men In Black 3” you’ll notice some things that feel familiar. It is the same aesthetic, the same music, the same sense of humor, and the same chemistry between characters as in the first two movies. That isn’t to say it’s bad, in fact “MIB 3” is moderately entertaining throughout, but it is the exact same formula, and you can’t escape a feeling of redundancy. The first “Men In Black” movie is a fun little sci-fi comedy, but the second, while enjoyable enough, is more of the same. And the third installment is even more, more of the same. “Men In Black 3” is one of those movies that you can watch and never have to think about again.

“Men In Black 3” is ultra vanilla. It’s tasty, some people will love it, but not everyone. You’ll chuckle at the banter between MIB Agent J (Will Smith) and Agent K (Tommy Lee Jones). Some of the jokes are off color, but not that off color. Some of the alien effects are gross, but not too gross. There is some violence, but it’s never too violent, and is either played comically and over the top, or for tragedy, to tug at your heartstrings. No one will be offended by anything in the movie; no new ground is broken; nothing veers off the beaten path.

As you probably gathered, J and K are back. Still neck deep in anonymously protecting the universe from rogue aliens, the two are having some personal issues while they battle giant space fish. What they really need it couples counseling. K’s tight-lipped refusal to get emotionally involved in any aspect of his life drives J crazy. On the flip side, J’s incessant yammering, his constant need to fill all silences with talking, grates on K. When Boris the Animal (Jemaine Clement, “Flight of the Conchords”) escapes from a high security prison on the moon, he travels back in time to exact revenge on K, who arrested him 40 years ago. Necessity drives J to follow Boris to 1969 to save his partner, learn a few secrets even the universe doesn’t know, and crack wise about how wacky the 60s were.

In 1969 J encounters a younger version of Agent K, played by Josh Brolin. Brolin is far and away the best part of “Men In Black 3”. He steals every scene with an eerily perfect Tommy Lee Jones impersonation. From the voice and expressions down to the movements and mannerisms, it is a seamless transition from J’s back and forth with old K to young K. It’s spooky, almost like you’re back in the first film, when the two are getting to know each other. Brolin’s performance is the most memorable part of the entire movie, and is the only thing that really makes it stand out. This is a less damaged K, more willing to be vulnerable, more human. Something happened to him in the intervening years to turn him into the sullen K of 2012.

There are some good moments in “Men In Black 3”. There’s a bowling alley scene that is hilarious; Bill Hader kills it as Andy Warhol; and the cinematography makes the movie look really good—the frame zipping around the Apollo 11 launch site is admittedly pretty cool. And of course Rick Baker’s creature effects look great. His work has always been one of the main attractions of the series, his aliens are bold and inventive. Basically what I’m trying to say the effects and the costumes and the camera work all come together into a slick package. It doesn’t hurt that Boris the Animal looks like a deranged version of professional wrestler Randy “The Macho Man” Savage (RIP). That’s an added bonus.

The time travel element of “MIB 3” actually works well—J has to dive off the Empire State Building to reach the appropriate speed to jump back, a bit like the Delorean in “Back to the Future”. The character Griffin (Michael Stuhlbarg, Boardwalk Empire), a fifth dimensional being who can see all possible moments in human history, and all potential outcomes at the same time, is a nice addition. He transcends being a simple plot device, and becomes a sympathetic character, soaked in an inherent sadness.

“Men In Black 3” is pleasant enough, but even though it is better than “MIB 2”, this isn’t anything you need to run out to see unless you’re a huge fan. Wait for it on Blu-ray, or better yet, when it runs back to back to back some night on cable. At this point in the franchise Smith is just going through the motions, and Jones lacks a liveliness he had in the first film. Brolin captures that feel, but Jones plays K as all dour, with none of the fun or energy that made him a great, likeable character.
Posted by Brent McKnight at 9:02 PM