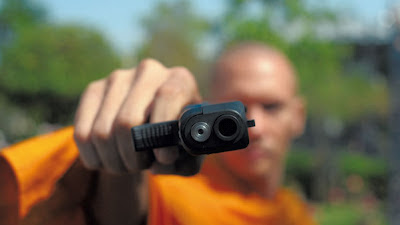 Director Pen-Ek Ratanaruang’s  (“Last Life in the Universe”) “Headshot” begins in a quiet moment, with a man seated at a desk, gently keying a letter on a typewriter. Nice, right? Only the man has a gnarly neck scar, and the letter is an assassination order. The film that follows this inauspicious, though ominous opening is not so much an action movie as it is a badass character study. A sprawling, twisted crime story that bounces around in time, “Headshot” has cops, robbers, guns, and gangsters. Jarring bursts of violence set the stage to play with themes of identity, selfhood, spirituality, and the very nature of good and evil. All in all, this is fertile ground for a crime movie to dig into.

Hailing from Thailand, you might expect a lighting pace, epic fight scenes, and stunt performers throwing their bodies about, willy nilly, with no regard for personal safety. You know, an “Ong Bak”/”Born to Fight” style onslaught of spinning elbows and flying knees. “Headshot”, on the other hand, features more gunplay than hand-to-hand combat, and skews towards introspective-thriller territory rather than a straight up action film.

Tul (Nopachai Chaiyanam) is an assassin. After catching a bullet in the midst of a job, he wakes up to find that his world has turned upside down. Literally. Something in his traumatic brain injury causes him to see everything inverted. As you can imagine, this takes some getting used to. As he comes to terms with his new way of seeing the world, Tul’s story unravels through a series of flashbacks and leaps forward. The story is a knotted mess of manipulation, blackmail, crime, and, of course, revenge. Ideas of justice as a purely human construct, as nonexistent in nature, parallels an unusual critique of capitalism, as a system that perpetuates evil genes down through countless generations.

Framed for a murder he didn’t commit, Tul is on the run from both the cops and the mob. His journey takes him from pensive moments of inner exploration, to brutal encounters with those out to do him harm. One particular scene with a lit candle and a mess of melted wax will make the dude component in the audience squirm uncomfortably in their seats.

Despite his profession, “Headshot” goes to great, repetitive lengths to prove to you that Tul is not a bad guy, just a guy who does bad things. His hand is forced, and he’s pushed into a situation where extreme actions and violence are his only legitimate options if he wants to survive. The moments when the film harps on this point are the weakest. By now filmmakers should know that audiences can relate to, and root for, a flawed antihero. Yes, even a hitman, we’ve done it before. All you need are some redeeming qualities, and you can be forgiven most everything else, no need to hammer viewers over the head.

“Headshot” wanders around for quite a while in the middle, wasting time, bouncing Tul back and forth between various facets of his personality. They’re trying to figure out the nature of who he really is; if he’s the sum of his actions, the culmination of his past, how he feels in the present moment, or the person he could become in the future. And maybe he’s more than any single one of those options. While this goes on, the pace stalls, the tension evaporates, and the film loses most of its forward momentum.

Tul’s life is one of starts and stops. By turns he’s a hitman, a monk, a fugitive. His life goes one way, then another, until “Headshot” begins to suffer from a moderate case of its own schizophrenia. Gritty and tough, it comes very close to being a great, brutal crime story, but falls just short. Based on a novel by Win Lyovarin, you can’t help but feel that there’s more all around: more to the character, more depth to the story. Unique and weird enough to justify watching and enjoying, you’re left wanting exactly that, more.