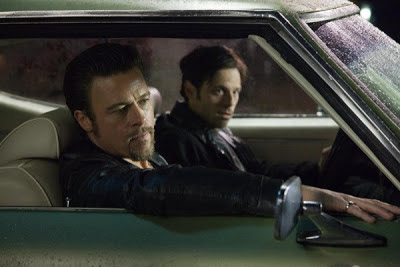 The last time star Brad Pitt and writer/director Andrew Dominik teamed up was for “The Assassination of Jesse James by the Coward Robert Ford”. That film is a long, slow burn; drifting in and out of scenes, dream like at times. Despite the gradual, deliberate pace, there is a force behind the narrative. Their latest endeavor, “Killing Them Softly”, an adaptation of George V. Higgins’ novel “Cogan’s Trade”, aims for the same goal. This time, however, they miss the mark, and instead of a steady, measured tempo, the film sags and meanders. It goes nowhere, and in the end, even though the story reaches the only logical conclusion, it peters out and leaves you empty.

That’s not to say that “Killing Them Softly” is bad. There are truly incredible elements, the performances are wonderful, and Dominik has a knack for creating moments of violence that are stunning and beautiful. One in particular is like a poetic, slow motion dance of bullets, blood, and broken glass. It’s all of this potential that makes the movie feel like more of a failure than it really is. In all honesty, “Killing Them Softly” is pretty good, but pretty good doesn’t cut it when you see what could have been.

When two low-level hoods, Frankie (Scoot McNairy) and Russell (Ben Mendelsohn), knock over a mob-protected card game, it kicks off a series of unfortunate events for them. The higher ups call in enforcer Jackie Cogan (Brad Pitt) to set things straight, and get things moving again. What follows is a unique, introspective take on a crime story. There are conversations, discussions of feelings, multiple angles, and a number of intersecting stories.

Part of the problem is that “Killing Them Softly” never really belongs to anyone. Based on a novel “Cogan’s Trade”, you can’t be blamed for assuming that Jackie Cogan is the main character. And, you know, Brad Pitt’s name is up in lights everywhere, so why not? Pitt is fantastic as Cogan. He’s tough, efficient, and funny, but smart and ruthless, approaching his craft like a strategy game, already planning his next move before he’s even finished his last. His exchanges with the fainthearted, ineffectual mob middleman (Richard Jenkins) are great. Still, he doesn’t feel like the center of the movie, and though you like him, you never get enough character to truly root for him.

The film starts out with Frankie, and his junkie Australian cohort Russell, and you think it’s going to be their story. And at time it is, but then the film wanders off. I’m all for tangents and asides and subplots, but the amount of screen time taken up by maudlin, self-pitying rambling of imported hitman Mickey (James Gandolfini), is a continual frustration. Wounded, drunk, and overly sensitive, Mickey expounds, at great length, about random uninteresting topics, like a hunting trip gone awry, his crumbling marriage, and a hooker he loved in Florida. That’s all well and good, if you only cared at all about anything he has to say.

It’s in moments like these that “Killing Them Softly” comes apart, and where the pace falters. You know they can do this type of side story right, because Ray Liotta has a similarly small part as the guy who’s card games keep getting knocked over—he’s as good as he’s been in years—but is both memorable and vital to the story in multiple ways.

Where the film is strongest is in the scenes with Pitt and Jenkins, those with McNairy and Mendelsohn, and McNairy and Pitt. McNairy is amazing, he’s the heart of the movie, and hijacks every scene he’s in. In a heroin-fueled haze, Frankie questions Russell about who he may have told about their heist, trying to figure out if he needs to run for his life or not. Both fade in and out of consciousness and the narrative like a dream, and the result is one of the best scenes I’ve seen in a movie this year.

“Killing Them Softly” really should be Frankie’s movie. He’s a blend of cocky, who-gives-a-shit attitude, and sheer, please-don’t-kill-me terror. But again, just when you’re beginning to engage, to really start to care, the film moves on to another thread, and by the time you return, that momentum is lost. If the film was just Frankie’s—and by extension, Russell’s—story, I would have been completely satisfied. Those two are perfect together onscreen. Russell is such an incredible scumbag that at one point he’s literally covered head to toe in dog shit, just hanging out like nothing is out of the ordinary.

They’re relationship serves as a launching pad for a twisted sense of gallows humor. Coupled with the derision Cogan and the middle man cast upon their superiors, who rule by committee because, like politicians, no one wants to be the one to make the unpopular decision, “Killing Them Softly” is, at least initially, way funnier than you expect it to be. From the very first frames, there’s also an awkward undercurrent of politics and economics, and they’re trying to set the whole film up as a mirror to current political climate. But this route is a clunky misstep that never amounts to much. In the end, that’s a metaphor for the whole film—it’s fun and interesting at times, but ultimately you wonder, what’s the point?
Posted by Brent McKnight at 3:12 PM