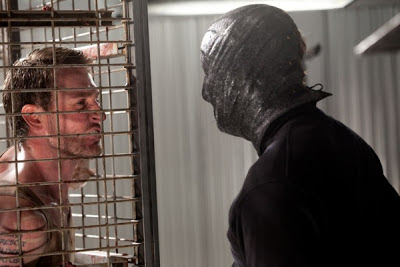 So, do all serial killers these days need tools and snares and an intricate system of booby traps in order to ply their trade? If the current trend in horror is to be believed, then yes, yes they do. I was hoping that we were going to leave that one to the “Saw” franchise, but from the looks of “The Collection”, that’s not going to happen. Granted, both writer/director Marcus Dunstan and writer Patrick Melton are veterans of that particular set of films (they also delivered “Feast”), so you should expect a device or two. Still, it’s gimmicky, and not particularly frightening.

For a while, however, “The Collection” is a pretty decent amount of fun—tongue in cheek, schlocky, and soaked in an absurd amount of gore. While that’s fun for a while, after a short time it gets rather wearisome. That’s an impressive feat for movie that’s only 75 minutes long (the run time is listed at 82 minutes, but it started at 7:30 and I walked out of the theater at 8:45), it shouldn’t have time to get that bland.

A low-budget sequel to a low-budget horror flick (2009’s “The Collector”), the most important lesson you’ll learn from “The Collection” is that you should never go clubbing when there’s a serial killer on the loose. This is a lesson Elena (Emma Fitzpatrick) learns the hard way. Everyone else in the shitty, secret goth rave she goes to would have learned that same thing, if they weren’t slaughtered in a scene that is best seen to be believed. Dunstan and Melton aren’t messing around when it comes to blood. The masked killer, known only as the Collector, cuts down the entire place with what is essentially an oversized lawnmower. It’s a good time.

The sequel picks up shortly after the first film. While Elena inadvertently kills an entire rave by setting off the lawnmower, she also manages to free Arkin O’Brien (Josh Stewart), the protagonist from the first film, from the clutches of the Collector. He then takes her to add to his collection. Arkin later winds up leading a band of commandos to go rescue Elena. It’s best not to look too deep into some things, but she has a rich dad, which obviously means he has his own personal army of mercenaries on standby. When they invade the Hotel Argento they find a waiting labyrinth of traps, piles of corpses, and a bunch of, you guessed it, collections. They’re supposed to be creepy, like bugs and limbs and such, but they’re not. At all.

Most attempts to scare are laughable, like when, for no apparent reason, the Collector decides to unleash a slew of tarantulas to crawl across the floor, or a room full of hanging bug-zappers. Yeah, I don’t get it either. He also has gang of attack junkies, people he’s abducted and addicted to drugs, who are like shrieking zombie caricatures lurking in his dank basement. That’s it. There’s a museum of human oddities, some tongue cutting, and a face stapling scene, but nothing like characters, or any plot besides moving the blood-soaked actors forward from one bit to the next.

Like I said, it starts out entertaining, but gets old real quick. The first film feels much tighter, and in trying to broaden their horizons and world, “The Collection” unravels. Given too much space, it devolves into a brightly lit, day-glo excursion that is an obvious attempt to expand the brand and father a whole slew of little baby “Collector” movies. Although the end is a bit of horror audience wish fulfillment, it’s also super contrived, and a little too on the nose to truly deliver.

Still, if you’re into this sort of gory horror, or just in the mood to watch an overly bloody schlock fest, then you might enjoy “The Collection”. It has a time and a place, and a few moments that are actually a damn blast, but overall it just falls flat and you’ll walk away with a disinterested shrug of your shoulders.
Posted by Brent McKnight at 3:10 PM