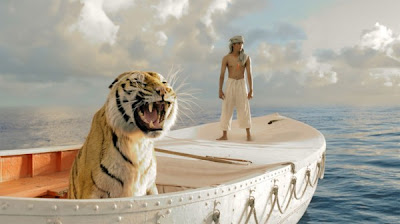 Giving Academy-Award-winning director Ang Lee access to 3D camera equipment and a modern-day fable like “Life of Pi” is the best idea anyone has had in a long time. He plays so much with depth field, color, and composition, that the end result is nothing short of breathtaking. Lee’s style and mechanics are the perfect delivery system for an epic tale of survival that borders on the world of magic realism. The heart of the story is, after all, the tale of a young boy and his tiger bro, engaged in the quirky tale of adventure, unlikely friendship, and an extraordinary existence. “Life of Pi” watches like a fairy tale.

Pissing Patel (Suraj Sharma), better known as Pi—not because his father was a mathematician, but because his real name leads to a vulgar confusion among his teachers and classmates—is a searcher. Sampling major religions, he attempts to create a sense of himself in the world, a world where he is equally devoted to Vishnu as to Allah and Christ. As he says, a Catholic Hindu faces guilt in front of hundreds of gods, and faith is a house with many rooms. This quest for identity and divinity is at the center of “Life of Pi”.

An intricate, detailed childhood back story—one with enough peculiarities to make Wes Anderson jealous—told from the perspective of an adult Pi (Irrfan Khan), sets the stage for the main action of the film. Pi’s father (Adil Hussain) decides to sell the family zoo in India, where his sons were raised, and move the family to Ontario. In the middle of the voyage across the Pacific Ocean, while Pi is on deck, dancing in the throws of a raging midnight storm, the ship sinks. Pi is left stranded, floating in a lifeboat with the only other survivor of the wreck, an adult Bengal Tiger named Richard Parker. Richard Parker is so named because of a clerical error.

Much credit should be given to Lee, and to Yann Martel and David Magee, the writers of the novel “Life of Pi” and the screenplay, respectively. The bulk of the film takes place on a small dingy, with nothing around for miles except open ocean, and where half of the living creatures onscreen can’t talk. However, you’re never bored, and the pace never sags. More than aimless bobbing on the waves, Pi’s daily existence becomes a harrowing battle to stay alive—against the elements, hunger, dehydration, and a massive starving carnivore—and to reach an uneasy state of truce and coexistence with Richard Parker. This also speaks volumes about the strength of Sharma’s performance. Asking such a young actor to carry the weight of an entire movie, especially on as thematically dense as this, is no small request.

Visually, Lee uses the vast, apparent emptiness of the middle of the ocean to present elaborate, stunning cinematic canvases. Among other tableaus, he stages a fish storm that leaves his protagonist covered in gleaming scales, sparkling in the sun like a mythic being as he searches the skies for meaning, answers, and god. At times it feels as if Pi and Richard Parker have come undone from the bonds and boundaries of this mortal coil, and floated off into space, two more specks of light among the twinkling multitude of the heavens. Never more than in these moments, “Life of Pi” is a lyrical, poetic composition about one boy’s esoteric quest for spirituality. Flawless special effects—from Richard Parker, to a celestial whale, and a living island inhabited exclusively by an adorable colony of meerkats—create a fantastic world where anything is possible, and nothing you see is a surprise.

Early on, during the first act, the frame story is clunky and obtrusive. The scenes themselves are actually quite nice, as a struggling author (Rafe Spall) interviews the grown up Pi. However, the transitions in and out of these moments, and the accompanying voiceover, a constant companion, are clumsy. This is the only big knock against “Life of Pi”, and it is a relatively minor one at that. By the time you’re shipwrecked, where the core of the film lies, the frame, like any good structure, fades into the background.

A stunning story of perseverance, friendship, survival, and the quest for answers, “Life of Pi” provides just enough to justify itself. Never stooping to blanket explanations and overly explicit solutions, it may frustrate you if you’re looking to have everything spelled out. But the film provides enough clarity that everything makes sense without ever feeling the need to point out obvious meaning. You know it is something more, but as Pi tells the author, why can’t it just be a story, why does it have to mean anything at all?
Posted by Brent McKnight at 8:34 PM