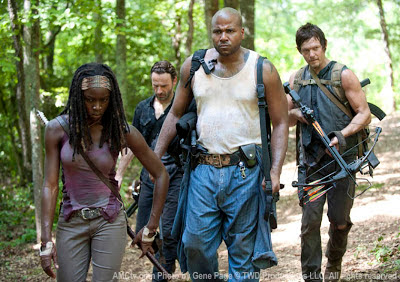 We’ll talk more about that, among many other topics, down below, but be warned, spoilers abound. They lurk everywhere, waiting strike when you least expect it. Proceed with caution, my friends.

Glenn most definitely knuckled up and held his ground in this episode. Not only was he threatened, tortured, and saw a gun pointed at his topless girlfriend’s head, all without giving up and spilling the beans about the prison, but he also managed to kill a hungry zombie while duct taped to a chair. So Glenn gets a bright, shiny gold star by his name for badassery and general toughness this week. Hell, he even won Merle’s (Michael Rooker) begrudging respect, that’s saying something.

While the aside with Glenn and Andrea (Lauren Cohan) was the high point of “When the Dead Come Knocking”, unnecessary delays occupy much of the rest of the episode. You can almost hear the writers and showrunners sitting around talking about what filler and extra nonsense they can shove into the episode in order to put off actually getting the point.

The side story with Milton’s (Dallas Roberts) experiment was a complete waste. His attempt to discern whether or not walkers retain any residual memories after reanimation is a tired retread of information viewers already know. Nothing more than a stalling tactic, it is a total waste of time. Maybe if you cared at all about the character at all it would be worth inclusion. A lonely, secluded man, he’s never seen the change happen before his eyes. If this were the one last hope he was clinging to, then it would be devastating for him to see his theory fall flat on its face.

The Governor (David Morrissey) implies as much, though it is only mentioned in passing with his “did Milton find what he was looking for” line, and is never developed any further. It doesn’t help that you don’t give two shits about Milton. He’s a flat, utterly pointless character. At least Merle and Daryl (Norman Reedus), the other characters that don’t appear in the comics, do things. Aside from seeing that Andrea  (Laurie Holden) is still capable of stabbing a zombie in the head without hesitation, there is nothing of value in this thread and these scenes.

And then there’s the dilapidated cabin in the woods. I actually groaned and cursed under my breath when they take refuge in the rickety structure. It is such a cheap, obvious gimmick, down to the generic old coot holed up inside, sleeping with a shotgun, seemingly unaware that anything is going on in the world. Michonne (Danai Gurira) shanking him was pretty sweet, and I laughed when they fed him to the walkers, even if it is nothing more than an excuse to add more gore to the episode (and I’m all about excessive blood).

This whole scenario is so contrived, and so awkwardly placed, that it completely derails the pace of the episode. Up to then you pumped, knowing the crew was about to mob up on Woodbury, and that we’re that much closer to the big payoff. Unfortunately, much of “When the Dead Come Knocking” harkens back to season two, when far too many of the episodes were nothing but this kind of filler, where they’re just killing time in random ways because they want to put things off until next week. That’s something the third season has largely avoided, and as such, this episode left a lingering bad taste in my mouth.

Something else I have concerns about is the Merle/Governor dichotomy. This isn’t the first time I’ve pointed this out, and even though I’m okay with a lot of the departures “The Walking Dead” takes from the comics, I’m not a fan of the way they handle the relationship between these two. As I’ve said before, it’s like they split the Governor’s personality into two characters. Again we see Merle doing all the dirty work. He’s the one who works over Glenn; he’s the one willing to get his hands dirty.

For just a moment you think you’re going to see the Governor’s true colors, to see just how nasty he can be. You think he’s going to do something horrible to Maggie. He pushes, and pushes, and almost gets there, but he backs off. Not that I want to see bad things happen to Maggie, and post-apocalyptic stories do overuse rape and sexual assault until it becomes gratuitous and exploitative, but Robert Kirkman’s Governor is so brutal, so vicious, that this incarnation is exactly what I feared he would become. The character is a watered down shadow of the source material, one that hardly feels like a villain at all much of the time. Merle feels like the real bad guy, and going about the story like this is a waste of the best antagonist in the series. You keep waiting for the Governor to have that “holy shit” moment, but every time you almost get to see the underlying ugliness, the show turns away.

Still, for all of the shows faults and problems, one thing “The Walking Dead” does well is end an episode. And “When the Dead Come Knocking” is no exception. As generally soured as I was, this chapter finishes on a strong note. The gang has arrived at the walls of Woodbury, things with Glenn and Maggie are reaching the boiling point, and in a general sense, things are about to get nuts. You’re right at the precipice of action.

Next week is the big fall finale, the last new episode of “The Walking Dead” we’ll get until February, and you know it’s going to go out with one hell of a bang. There will probably be a WTF cliffhanger moment at the end, but we get to see what happens when Daryl and Merle reunite, and when Rick and the Governor there are sure to be fireworks.
Posted by Brent McKnight at 11:37 AM