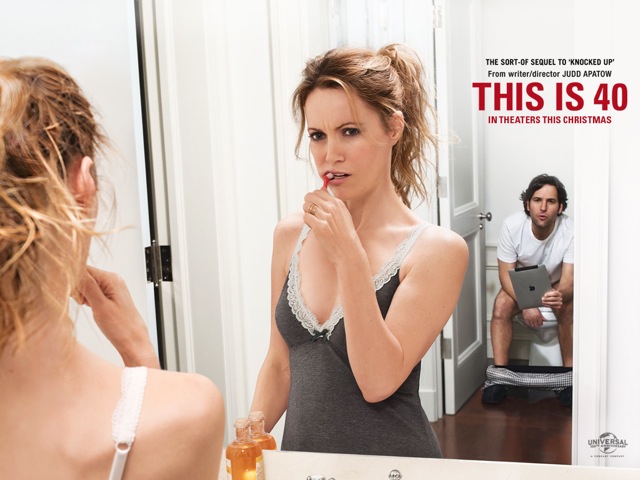 At this point you know exactly what you’re getting into when you sit down to watch a Judd Apatow movie. You’ll start out with some raucous, improvised humor—think frequent use of the word vagina and cursing at inappropriate moments. After a while there’s a big life complication that needs to be worked out, and at the end everybody hugs. This is the pattern for the movies he produces, the movies he writes, and the movies he directs. His latest opus, “This is 40”, never strays from this formula for a moment, and while it has worked for him in the past, it fails in comparison to his other films.

“This is 40” also has one other hallmark of an Apatow joint: it is so much longer than it needs to be. Clocking in at two hours and fourteen minutes, you could easily do without 30 or 40 of those minutes. He falls in love with every little bit, with every last scene, and holds onto it with a kung fu death grip, unwilling to leave it out, even when it damages the overall narrative. Walk into any writing class in the world, and the first thing you learn is that sometimes you have to edit out things that you truly, deeply love because they have a negative impact on the pace and shape of a story. Apatow has never learned this lesson, and his movies suffer for it. A ton of unnecessary asides waste time—like an annoying voyage into the lives of the staff at a boutique one character owns—and “This is 40” drags on until the only thing you want is for them to get to the point, any point.

“This is 40” is the so-called “sort of sequel” to Apatow’s accidental pregnancy farce “Knocked Up”. Spin off is a more accurate description, as the film follows Pete (Paul Rudd) and Debbie (Leslie Mann), minor characters from that film. Both are about turn 40, within a week of each other, and the film takes the generic sitcom approach to both age and marriage. Obviously marriage is the absolute worst thing that can happen to anyone ever, and as soon as you turn 40, you should probably just die. One thing TV and movies have taught me is that marriage equals a tense, sexless limbo where each partner has fantasies about the death of the other. It’s a bland take full of characters saying things that have been said before, with an occasional poop joke thrown in. Pete sits on the toilet because he can’t stomach spending another moment with his family, and Debbie doesn’t want anyone to know how old she is, so she lies about her age, but can’t remember what age she tells different people. It’s wacky.

Because Pete and Debbie have long since ceased any functional communication, neither one discloses that their respective businesses are failing. Debbie’s small clothing shop is a flop, and Pete’s nostalgia-based record label only sold 612 copies of their last release. Tensions at work and home, and all of these secret stresses pile up until you know an explosion is coming. But even when things reach the boiling point the film goes on and on and on. Every time you think “This is 40” is moving towards a resolution it throws another unnecessary complication. You could completely cut out the subplot with Debbie’s estranged father (John Lithgow), among others, and not miss it for a second.

You’re supposed to feel bad for Debbie and Pete, but they’re so fucking miserable that it’s difficult to sympathize. All they do is bicker, they can’t stand each other, and can barely be in the same room without clashing. It isn’t even funny banter, they’re straight up mean and say horrible, horrible things to each other. They fight about music, they fight about money, they fight about parents. Every word is an accusation, criticism, or attack. You don’t really want things to work out in the end because at a fundamental level, they just don’t like each other. All they do is lie and complain and drag each other into quarrels. It’s the least healthy relationship you’ve ever seen, and when their daughters (Apatow’s real life children Maude and Iris) scream for their parents to shut up and stop fighting, you can’t help but agree.

Money trouble is something most viewers can relate to, right? But they even make that virtually impossible to commiserate with. When you drive a brand new BMW, your elementary school age child has a $500 iPad, you live in a giant house in an upscale neighborhood, and you can secretly loan your deadbeat father (Albert Brooks) $80,000 without your wife knowing anything is amiss, it’s really, really hard to care about the financial hole they’ve dug themselves.

There are a handful of funny moments in the movie, the best of which are the two scenes with Melissa McCarthy (“Bridesmaids”), but overall the humor is toothless and boring, and woefully sparse. “This is 40” limps along, carried by the charm and charisma of Rudd and Mann, until it reaches a lazy, simple conclusion that you see coming from the first frame. You want to like this, primarily because the two lead actors are so likeable, but while Apatow’s movies are usually big on heart and earnest feeling, there is none of that in “This is 40”.
Posted by Brent McKnight at 7:43 PM