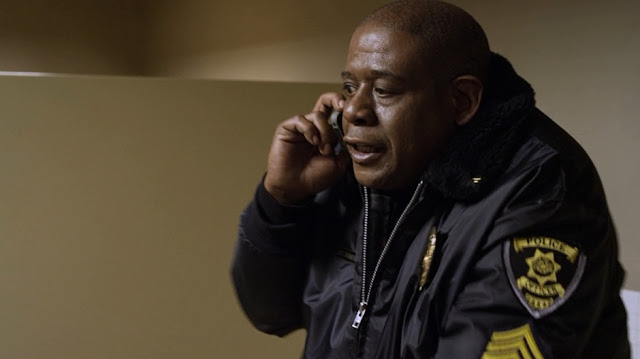 So a cop walks into an all night diner…No, this isn’t he beginning of a tired joke, this is how the new direct-to-video crime thriller “Pawn” kicks off. Said cop, played by Forest Whitaker, walks smack into the middle of an armed robbery. From this simple set up spools out a twisted web of story threads, layered narrative, and constantly shifting points of view. Though the film starts off strong—not great, but solid—it comes off the rails not far down the line.

“Pawn” is one of those movies where you’ve heard of almost everyone in the cast, but never even heard mention of the film. Beyond Whitaker, the credits include Michael Chiklis (“The Shield”), Ray Liotta (“Goodfellas”), Common (“Hell on Wheels”), and actors from “Twilight,” “Gossip Girl,” and many more. Still, despite all the familiar faces, it never adds up to much.

One of the biggest problems with “Pawn” is that the attempts to create a taut, nonlinear story that keeps you guessing, backfire. Nearly every scene has a twist, and you get exhausted after a while. You understand where the filmmakers are coming from, they want to tell a story that isn’t predictable, and they pull off the first few attempts. Maybe there’s more involved in the robbery than first meets the eye. But when you realize what’s in store, you wait for the next one, and before long, you’re more focused on the curveball that you know is coming.

After experiencing twist after twist, you not only know that one is on the way, you learn exactly how the script from Jay Anthony White is going to shimmy. Then it becomes predictable, and you’re more concerned with seeing if your guess is correct, than with anything that’s actually going on onscreen. Instead of setting them up and earning them, the sudden shifts and moves emerge out of nowhere. You feel like while they were writing the script they had an oven timer that went off every so often, and that was when they had to throw a trick into the plot.

The story is held together by the most tenuous connections, and eventually, “Pawn” collapses under the weight of its own efforts to be clever and twisted. But even before that, the narrative jumps around all over the place, from character to character. You’re with the cop, then the crooks, then the hero, then the mobster, then the wife…and on and on. From the first setting in the diner you move forward, seeing the action from first one character, then another. You bounce back to see what everyone was doing before the robbery, to find out how everyone wound up in this sticky situation. The film shuffles you around at the drop of a hat.

You get what they’re trying to do, they’re trying to craft a multi-layered crime saga where the various threads weave together and unravel off in their own directions. The filmmakers want this to be “Pulp Fiction,” and that’s a fine ambition. It’s also hard as balls to pull off. By trying to make the story too complex, you never truly identify with, or root for, anyone. You have no emotional investment, the story never truly belongs to anyone, and it gets tiresome to watch. Just when you get drawn into an arc, the film pulls you out and places you in another character’s point of view, and the whole process begins again. It gets tiresome, quick.

“Pawn” is one of those crime movies, you’ve all seen them, that tries to be mysterious and shadowy—every character has an angle, and you, like the characters, aren’t sure who you can trust. But for all of the film’s pretentions to mystery, everything is totally, stupidly, over explained. There is no subtlety or subtext to the dialogue, and everyone says the most obvious thing at every given opportunity. Oh, hey, Michael Chiklis is going to explain why he has a sometimes-British-sometimes-Australian accent, to a close friend, who knows where he was born. Cool, Nick is going to explain to his wife, who just picked him up from prison and presumably knows why her husband was incarcerated in the first place, about how he broke into a car and went to jail. That kind of exposition heavy conversation is everywhere. It’s like the first day of school, where you go around the room, tell everyone your name, and one important fact about yourself.

As much as it falls apart, and as wrong as it goes, “Pawn” does begin well enough. This is a case of a film trying to do too much, an impulse I understand—who knows when you may get another shot at this—but it spirals out of control until, even the 88 minute run time is too long. In the end, there’s simply isn’t much to recommend this. And the Blu-ray/DVD release doesn’t do much to change your mind, either. Between the cast and the slick production, you might be able to cling to that, but the digital presentation is so clean that the movie has a sterile aesthetic, a clinical feel. The only extra is a making-of featurette that follows the standard pattern of what it is. If you absolutely must know more behind-the-scenes information about “Pawn,” then you’re in luck, but otherwise it doesn’t hold much interest.
Posted by Brent McKnight at 3:25 PM