After a sojourn into other realms, and a self-imposed year-long hiatus from the industry—sort of, he did release the documentary “Arirang” in the interim—controversial director Kim Ki-duk is back to doing what he does best, making grim, tough to watch movies about a bad man doing terrible things to people. While his latest film, “Pieta,” never reaches he highs of other recent South Korean revenge films, never truly delivering that strong emotional connection, it is a gritty, visceral ride nonetheless.


Kang-do (Lee Jeong-jin) is a particularly nasty loan shark, operating out of a Seoul slum, preying on the weak and the desperate. You know, a loan shark. He may look like a weepy, shoe gazing, gothic-worshipping bird, sporting a feathered hairdo and just enough extra eyeliner to make his haunted eyes pop, but he’s also exceptionally vicious. Mired in a deep existential ennui where he can barely get out of bed in the morning without rubbing one out, his specialty is crippling people who owe him money in horrible fashion and collecting their insurance claims. Think staged industrial accidents and falls from tall places. Not enough to kill you, just enough to ruin your life.

Lee fills his character with a sense of boredom. For all his heinous acts, he’s just going through the motions at this point, hurting people, going home, slaughtering his dinner on the bathroom floor, and hitting the sack. When a woman, the fantastic and heartbreaking Jo Min-so, claiming to be the mother who abandoned him at birth arrives on the scene, something inside of him breaks, and as you can imagine, it unleashes all manner of pent up emotions. He has some definite feelings time as he tries to figure out the angle she’s playing, or if, perchance, she is legitimately who she says she is.

Not a straightforward tale of reunited family members, “Pieta” evolves into a layered story of revenge and obsession. Is this woman a gift, a curse, a grifter? Is she a weakness? Now that Kang-do has a connection in this world, something with personal meaning, do his enemies have a target to exploit? Following this train of thought, he unravels into tortured paranoia, unexpected bursts of emotion, and a whole other level of violence. Son or not, witnessing Kang-do’s cruelty, she tempers his viciousness, and attempts to instill a sense of compassion in him. Glimmers of hope and love poke through the sweeping baseness on occasion, like one young man who willingly offers himself up for mutilation in order to give his unborn son a shot at something more. 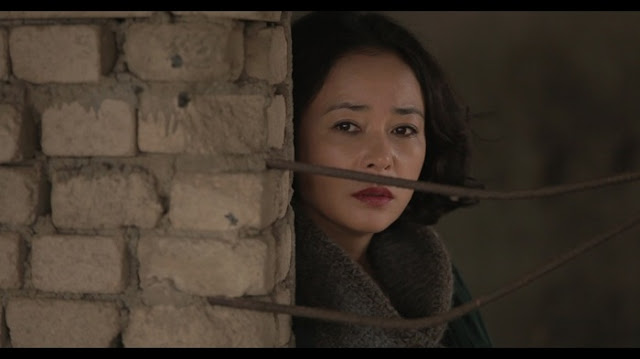 The plot of “Pieta” is unique, and Kim makes great use of the slum setting. Tight, twisted corridors lead through what, at times, resembles a bombed out warzone. Given the extreme  poverty of the place, you see why the owners of failing businesses have no other option than to risk debilitating injury in the vague hope of something better. There is hardly a second where you aren't wracked by claustrophobia, mental and physical, and the few moments where you have space to breathe, someone is about to be tossed off the top of a building. The location and scenery metaphorically connect to the tangled web of the story, each tight branch leading around a hidden corner, revealing a new tier of the truth.

For a movie about brutality, the violence in “Pieta” is, for the most part, restrained in what it shows. Blood and gore are implied and filmed and edited around. Still, there is one moment, the moment, that serves little other purpose than to attempt to shock. When the media guide for the Seattle International Film Festival mentions a scene of extreme, graphic violence, it isn’t difficult to imagine exactly what’s in store. And instead of blowing your mind, illustrating how damaged and depraved Kang-do is, it comes off as gratuitous, out of place, and doesn't accomplish anything the rest of the film doesn’t. It’s sensationalistic, like showing off a spectacle. In trying to throw you off, in trying to illustrate how far one person will go in search of retribution and vengeance, Kim colors the rest of the movie, and not in a good way. All it makes you do is wonder why you needed the traces of incest and cannibalism.

Maybe not the top of the heap when it comes to the Korean revenge subgenre, “Pieta” is definitely worth a watch, especially if your predilections already skew in that direction. However, the more familiar you are with this set of films, the less impact it will likely have. You probably know what you’re getting into, bad people doing bad things that will occasionally make your stomach churn. It’s nice to see Kim back to doing what he does best, dark, brooding crime stories.

“Pieta” played recently at SIFF, but Drafthouse Films has also made it available streaming on demand and in a limited theatrical release.