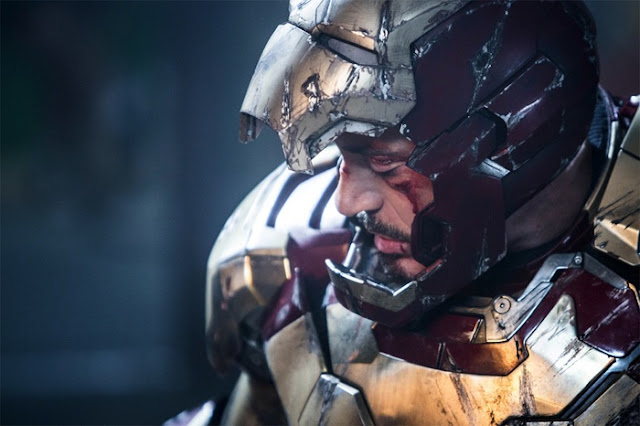 The world has changed since “The Avengers.” You can’t have Norse gods falling to Earth and aliens invading New York City through a wormhole without fundamentally altering at least a few preconceived notions about how the universe works. “Iron Man 3” is the story of how these changes have impacted one man, only this particular man happens to be millionaire playboy, maverick inventor, and key member of the Avengers, Tony Stark.

More than most movie superheroes, Stark, and by extension Iron Man, truly belongs to Robert Downey Jr. Hugh Jackman and Wolverine are a definite runner up, but there’s serious distance between first and second place. There’s such a level of connectivity between actor and character at this point that it’s damn near impossible to look at one and not think of the other. And like the first two films, Downey Jr. carries the load here. Everyone else—both heroes and villains—exist primarily as sounding boards for Stark’s near stream of consciousness quips and quick banter. Hell, there are times when he plays both sides of a conversation just to have someone to argue with who can keep up.

After the events in New York, which everyone watched unfold in real time on live television, Stark has gone to a dark place. He isn’t sleeping, there’s an ever-increasing distance between himself and Pepper Potts (Gwyneth Paltrow), and all he can do to take his mind off of what happened is to endlessly tinker in his basement lab/workshop. By the time we get to “Iron Man 3,” he’s up to the 42nd incarnation of his armor. The implication is that he has PTSD, though the script, by director Shane Black and Drew Pearce, skirts around explicitly stating his ailment. However, when a nightmare causes him to call one of his suits remotely, and it attacks Pepper in bed, the situation is obvious.

This set up is good way to keep the movie connected to overarching Marvel mythology, while still allowing them to tell a stand-alone story. You get glimpses of how the larger world is reacting to New York—for instance War Machine has been rebranded as the Iron Patriot, because it tested well with focus groups—but in the end this is the story of one man going through hell, having everything he cares about endangered, and coping with things he thought were impossible. Going through a wormhole and fighting aliens in the streets of Manhattan will do that to a guy.

Enter the Mandarin (Ben Kingsley), a vicious, Bin Laden style guerilla terrorist with a flair for the dramatic, bent on teaching America a series of explosive lessons. Initially Stark has better things to worry about, namely himself, and leaves dealing with the Mandarin to those in official government channels. That is, until the attacks touch home, and he issues a very public statement calling for “a little good old fashioned revenge.” His pride, his hubris, ultimately sends him headlong into even darker territory.

“Iron Man 3” is as much fun as the previous installments, maybe more. Action and banter propel the entire film forward—at one point Iron Man shoots down a helicopter with a piano—and there’s a bleak, grim center to the glossy, candy shell that provides added depth. Guy Pearce does a nice turn as rival scientist Dr. Aldrich Killian, the mind behind the gene-altering Extremis.  Don Cheadle’s Colonel James Rhodes is back for more snappy repartee with Stark, and a turn at the controls of the Iron Patriot. And Tony even gets a smartass kid sidekick for a while—a kid that he calls a pussy because his dad abandoned him.

One of the primary themes of the movie is the idea of a pure goal being corrupted. Everyone starts out with lofty aims of changing the world, but over time those ideals shift and morph into something unrecognizable and contemptible. Compromise, pride, greed, lust for power, and similar external influences grab hold and twist what was once clean and good into something sinister. On the surface this goal is pure science used for nefarious means, but you can step back and expand the parameters of the metaphor to include individuals, political ideals, and even entire nations.

At the beginning, and popping up at a couple of times throughout “Iron Man 3,” you get Tony Stark’s voiceover narration. Ultimately this makes sense, and pays off like a long con, but most of the time it’s awkward and feels out of place. You don’t know why it is necessary, or who he’s talking to, and it doesn’t tell you anything you don’t glean from the rest of the movie. It even removes a little bit of the tension because he’s relaying his story after the fact, so you know he makes it through his adventure alive. You never really expect him to fail, and you don’t know what other potential tragedies have befallen him along the way, but knowing that dulls the edge just a bit.

My only other knock is that at times “Iron Man 3” toes the line of being too gimmicky, of Tony Stark having too many neat toys that just happen to be perfect for each moment. Of course he has a tool designed specifically for every situation. You worry that he’s going to become a caricature of himself, but he’s already a larger than life figure, so that isn’t much of a problem. To be honest, these are very, very mild concerns, and shouldn’t impact your enjoyment of the movie. These are nitpicky things, and I’m just looking for something to be critical of.

Certainly if we dissect the film, especially coming from a comic book perspective, we could find all sorts of things to quibble with, but as a movie, “Iron Man 3” is fantastic, and a worthy follow up to “The Avengers.” With a super-fast pace, great characters and performances, and more high-tech action than you can shake a stick at, it’s difficult to imagine many other summer blockbusters living up to “Iron Man 3.” We’re talking about a movie that made more than $200 million before ever landing on US shores, and this is nice step in Marvel’s ongoing bid for cinematic world domination.
Posted by Brent McKnight at 6:43 PM