Sandwiched between blockbuster superhero movies and epic science fiction adventures, this summer at the movies also delivers the close of the so-called “Wolf Pack” trilogy. “The Hangover Part III” closes out the lucrative franchise with the most tedious, supremely unfunny installment yet. Walking out of the theater we can all be glad that this is finally over. The best you can say is that at least it wasn’t a simple rehash, like the sequel.


You can forgive almost anything in a comedy if, you know, it makes you laugh. And though “The Hangover Part III” elicits a few minor chuckles—and we’re talking minor—that's all it has going for it. The film even manages to make Melissa McCarthy and John Goodman, two of the funniest people currently alive, totally drab and uninteresting. For a moment you think they're going to throw caution to the wind and unleash the kind of raucous, hard R rated comedy that made the first movie so much fun. But that hope never manifests.


“The Hangover Part III” is little more than Zach Galifianakis doing that awkward thing he does. A one trick pony, you’ve seen it all before, and he isn’t enough to carry a movie, or be interesting at all. The other series stars, Bradley Cooper and Ed Helms are just along for the ride at this point, standing aside and collecting a paycheck while Galifianakis reams his shtick for all it’s worth. Phil and Stu just hang out and make exacerbated noises as Alan does stupid shit. It feels like they’re barely present.

Instead of being funny, the movie is mired in a convoluted mess involving Chow (Ken Jeong), a mobster named Marshall (Goodman), and a bunch of stolen gold. Every plot point is contrived to maneuver the main characters into yet another artificial sticky situation. Every attempt at humor is so tired and lame that you groan and grind you teeth far more often than you laugh or even grin. Great, Allen is fat and falls down all of the time, lets put him in situations where there are funny things to fall into like cock fighting roosters. Cool, Chow is going to karaoke “Hurt” by Johnny Cash in a Tijuana dive bar. That's funny, I guess, if you like obvious gags you see coming a mile away.

Maybe the most awkward thing about “The Hangover Part III” is how writer/director Todd Phillips and writer Craig Mazin try to make the story dark, but have no idea how to go about that. Sure, you're dealing with international criminals, people are murdered, and if his were real life, you’d be horrified. The same thing can be said about the first two movies, but that didn't stop hem from making a go of it. All of a sudden you're going to try to make Alan see how terrible all of this is? You're going to try to pull that off? Just a heads up, you're not going to. No one is going to buy this, not even the characters. The only time Phillips almost pulls off  the darkness is when, as the Pack drives into Vegas for one last showdown, “Mother” by Danzig pounds away over the crane shot. This is simultaneously the funniest and most ominous moment in the movie that tries, and fails, to be both.

It’s like Phillips thinks we care a great deal about these characters. We don’t, and aren’t interested in watching them grow into more mature, fully formed human beings who will live meaningful lives in the future. No, we want to watch them do crazy things, make poor choices, and be as crude as possible. Not that there isn’t room for character and emotion in a raunchy comedy, but that isn’t the priority in a “Hangover” movie. Did other people somehow form a close connection to these characters and I missed it? They aren’t the worst people in the world, but you aren’t particularly in love with any of them either. It’s curious. And even if we did want to see a complete character arc, “The Hangover Part III” isn’t even in that neighborhood. The big A-Ha moment is forced and idiotic.

One key difference between this film and the others chapters, is that this time Alan isn’t portrayed as quirky and weird, he’s straight up mentally ill. To compound his serious, deep-seeded psychological issues, he’s off his meds. Nothing spells hilarity like a troubled man on a rampage. In fact, he’s being driven to a facility in Arizona to receive hardcore institutional treatment when Marshall snatches up the guys so they can to hunt down the ever elusive Chow. It seems like a dick move to center a raucous comedy around untreated metal illness, and more than anything, this choice makes the movie exploitative and gross.

Going in, expectations weren’t super elevated. Part two took care of that. Still, this is really the only big R rated comedy that we're getting this season, and I at least hoped for a couple of sound laughs, some crude humor, a few tasteless jokes, and good old fashioned foul mouthed debauchery. In reality, “The Hangover Part III” is pretty tame, and so bad that it actually makes you question whether or not the first movie was any good, or if you just bought into a collective delusion. 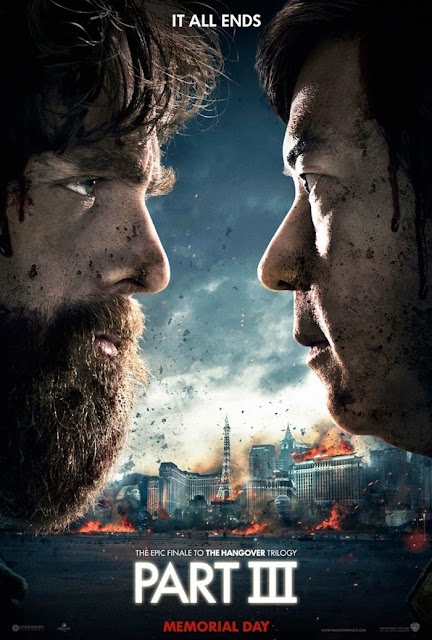 Posted by Brent McKnight at 7:17 PM