'Metallica: Through The Never' Movie Review It must be a huge ego stroke to see an extreme close up of your own face blasted five stories high across an IMAX screen. Then again, no one ever accused Metallica of being the most modest group of guys in the entire world, and you won’t think anything different walking out of their new movie, “Metallica: Through the Never.” Billed as a hybrid concert film slash narrative action extravaganza, don’t go in expecting an actual movie. This is essentially a live performance with may ten or fifteen minutes worth of music video-esque story cut in. If you’re a fan of the venerable heavy metal outfit, then you’ll be totally stoked on “Through the Never,” but if not, this holds little interest for you. That much should be self-evident.

Here’s what story there is, and like I said, there isn’t much. There’s a big ass Metallica concert. Metallica fans are psyched, like one dude partying in the parking lot psyched. You get a brief set up where the band members do things that are supposed to make them look cool—like scowling and driving an old school hotrod that shoots flames—but are, in reality very silly. No matter how much he tries to hard stare you, Lars Ulrich is not intimidating. During the show, a scrawny young roadie named Trip (Dane DeHaan from “Chronicle”) is sent to go get something the band “needs” for the show tonight. When he goes out into the world to retrieve this mystery item, which, in a nod to “Pulp Fiction,” you never actually see, his sweet windowless van—they all drive windowless vans—gets T-boned, and he finds himself in some sort of post-apocalyptic melee between metal heads and the cops.

There’s no reason given for this conflict, or any story at all, there’s just dudes in sleeveless vests and bandanas over their faces fighting with police decked out in riot gear. Your initial reaction is, huh? But then you remember one key fact, this movie was written by Metallica, with an assist from director Nimrod Antal (“Predators”). When you take that into account, it all makes so much more sense. These are not, after all, men renowned for their story telling acumen and their narrative chops, these are guys who write—or wrote, depending on your stance—kickass thrash metal. 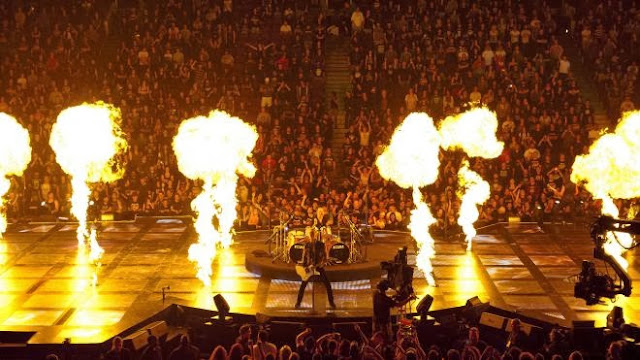 What plot there is gets more and more nonsensically surreal as Trip’s adventure continues, until he’s fighting some sort of evil, gasmask-wearing horseman who keeps stringing people up from streetlights. The whole thing plays out like the wet dream of a 15-year old metal kid smoking weed in his parent’s basement saying, “you know what would be awesome…” But there is actually very little of this going on. Most of the screen time is taken up the Metallica concert. You get a minute or two of Trip running around during each number, but the primary concern here is rock and roll. And from what you gather, this looks like a boring Metallica concert.

Once upon a time, Metallica was scary as hell. When I was a kid I remember a friend telling me he saw them live and when the fans discovered that the venue had assigned seating they tore them out of the ground and built a pile off to the side so they could dance. Security did nothing because they had no choice, outgunned and outnumbered as they were. Once the “Black Album” dropped things changed. With the success of songs like “Enter Sandman” they experienced a whole new kind of mainstream success, and with it, their fan base, and the band, underwent a fundamental change. Many people blame this shift on the death of bassist Cliff Burton—we could discuss this point all day—but whatever the reason, you started seeing dudes with letterman jackets at their shows, and their edge seemed to dull.

This is on full display at the concert in “Through the Never.” Maybe it’s because this was filmed in Canada, but it’s shocking how young and passive the crowd is—you’ll be hard pressed to find a single grizzled old school head anywhere—and they don’t do anything. The band gives a great performance—no lie, this version of “One” is badass beyond belief—but the crowd does nothing more than stand there bobbing their heads in a very polite manner. You don’t want to windmill your head too hard and risk whipping your neighbor in the eye with your hair, do you? At one point you see a small pocket of fans start to thrash about, but that’s short lived. I doubt this fact will impact your enjoyment of the movie in any way, but it is something you may notice in the background as Antal’s cameras swoop around the arena.

If you’re going for Metallica, which I suspect is the element that’s going to draw most of you to the theater, then you’ll be thoroughly satisfied with this 3D movie going experience. If you’re one of the few looking for more of a dystopian nightmare where Metallica fans battle cops and horse demons in the streets, “Through the Never” will leave you wanting.

Posted by Brent McKnight at 7:57 PM