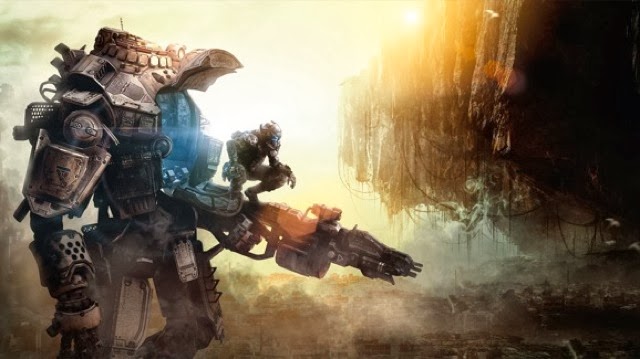 Titanfall is one of the most highly anticipated video games coming down the pipe. I know less than shit about video games, but even I’m aware that fans are pretty damn pumped up for the latest offering from Respawn Entertainment. The game doesn’t even come out until Tuesday, March 11, but if advanced hype is any indication, it’s going to be rather popular. People at work who managed to get their hands on beta versions of the game can’t, or at least won’t, shut up about it. To be honest, I don’t particularly know what sets this apart from its competitors, or why it walked away from E3 2013 with a record breaking number of awards. I don’t know anything about game play, or the history, but what I do know is that visually the game is absolutely stunning. Even if you’re like me, and think video games peaked with Ms. Pac Man, you take a look at the gorgeous new book The Art of Titanfall.

Here’s a quick bit about the game. Titanfall is a first person shooter that places the players inside of big ass mech suits, kind of like Pacific Rim, but on much smaller scale. Think 25-feet tall instead of the height of a skyscraper. You can apparently also run around on your own if you choose. Game play is an amalgam of cooperative multiplayer games—up to twelve at a time can go on group missions—but also injects more typical single-player elements, like plot and non-player characters. Action goes down on a war-torn planet, but there are a variety of ships and environments rendered in game.

You definitely don’t have to be a fan of the game, or even games in general, to appreciate this new offering from publishers Titan Books—a funny coincidence. The actual book itself is slick and nice to look at, like those expensive tomes you see at Barnes and Noble full of high quality reproductions of famous paintings. If someone breaks into your house and this is all you have to defend yourself, you stand a fighting chance. You could definitely bludgeon an intruder into unconsciousness with this, and there’s a distinct possibility it could stop at least a small-caliber bullet, it’s rather substantial.

Inside, The Art of Titanfall is also very similar to those fancy-pants art books, only way, way nerdier, which is a huge bonus. It starts off introducing the Titans and characters then moves into creatures, ships, weapons, and settings. Basically it has everything that any sci-fi fan could want: robots, monsters, and space. You get full-page images of the various components, but also quick blurbs about not only what they are in the game, but also little bit of where the design originated.

The finished pictures are an impressive mix of old and new methods, combining classical artistry and skill with cutting-edge 3D digital technique. There are pieces of concept art and some rough sketches that lead to the glossy, final looks, so you can see how the different parts evolved over time into what you face in the game. The very last entry in the book details the modeling the artists did, including the manufacture of a full-sized Titan suit, which you have to admit is cooler than anything you have where you work. All my office has is a life-size cardboard of James Bond and an oversized Pink head.

All of this is worth checking out. The robot and creature designs are fantastic, as are the ships and weapons. However, the real highlight of The Art of Titanfall are the locations. There’s a wide variety in play, from open rural settings to cramped urban areas and decimated cityscapes. Some of the cities will definitely call to mind such sprawling futuristic worlds as Blade Runner, and the level of detail is breathtaking. The intricacy and depth of field is incredible; the very idea of painstakingly rendering each and every frame, so to speak, is daunting.

If you’re a gamer, especially one particularly excited for Titanfall, this book is definitely worth your time. You’ll also get a lot out of it if you’re interested in the construction and behind the scenes aspects of game design. People not into either of those things, like me, can still thumb through and gawk at the pretty pictures and marvel at the craftsmanship that goes into modern games, but that’s likely all you’re going to walk away with. The Art of Titanfall is available now, and the actual game goes wide on this Tuesday, March 11.
Posted by Brent McKnight at 1:24 PM