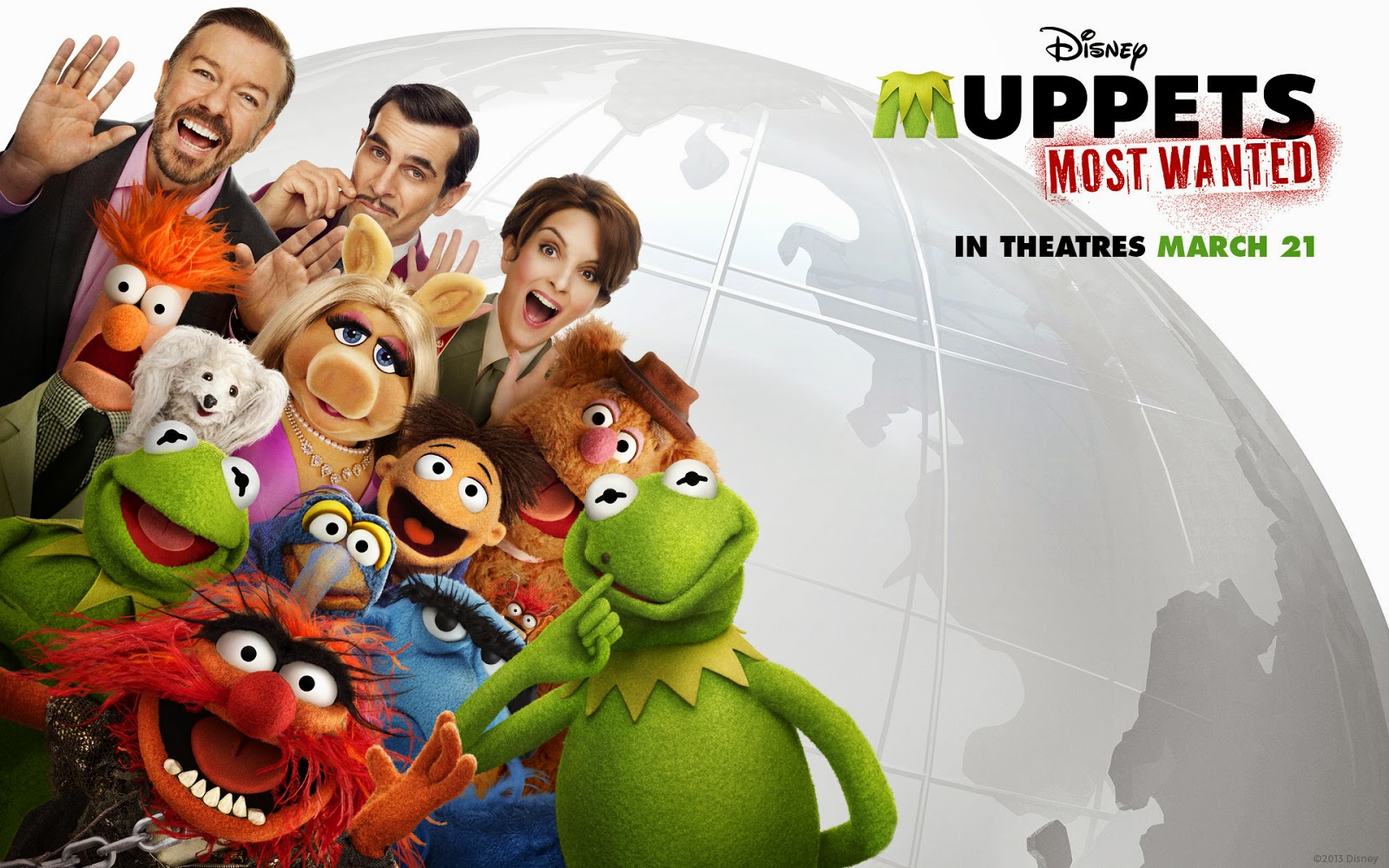 We all know how rare it is that a sequel lives up to, let alone surpasses, the original. It definitely happens from time to time—“The Empire Strikes Back” and “The Hunger Games: Catching Fire” both spring to mind—but in the grand scheme of things, this is the exception, not the rule. The folks behind “The Muppets Most Wanted” are well aware of this, and tell you right up front that their movie is not going to be nearly as good as the 2011 franchise reboot. Most of us didn’t expect it to be—that movie was on my ten-best-list for the year—and the sequel simply never measures up.

The action picks up immediately at the conclusion of the last film, and the first thing the Muppets do is sing a song about the sad state of sequels. And every note they sing is correct. “Most Wanted” isn’t terrible, but every facet of the film falls a notch or two below its predecessor. The story isn’t nearly as heartwarming, the cameos are middle of the road, you never feel the same connection either as a member of the audience or between the characters, and the songs are nowhere near as memorable. In fact, this first song is far and away the best of the bunch, and even that isn’t great. So going forward, you can’t say they didn’t warn you.

The biggest problem with “Most Wanted” is the focus. Instead of being about the actual Muppets, you know, the whole reason you care about this movie in the first place, the story centers around two characters you don’t know and don’t particularly want spend much time with. In the wake of the last movie, the Muppets—who have now become self-obsessed and oblivious—get a slippery new manager, Dominic Badguy (Ricky Gervais), who sends them on a world tour. This worldwide jaunt serves two purposes. First, so the movie can show off its budget by filming in places like Rome and Madrid. Second, so that Dominic can help the master criminal Constantine escape from prison. You’ll notice that “the world’s most dangerous frog” bears a startling resemblance to Kermit, only with a telltale mole on his face.

Before long, Kermit has been replaced, and the crew travels the globe without him, setting up shows as a cover so Dominic and Constantine can put together the pieces of an overly elaborate plan. This scenario devolves into a pissing match between the two criminals that not only takes up time, but is also painfully uninteresting. You don’t care that Constantine doesn’t respect Dominic as a thief or a partner, not one little bit. Even with all of this oh-gosh-darn-it-why-doesn’t-my-boss-respect-me back and forth, these two never become more than flat evil stereotypes, so all of this time is for naught. I’m not the only one who thought this was dull, every kid around me in the theater got restless as hell during these bits, because what happens onscreen is not engaging in any way.

The first third of “Most Wanted” is squandered with all of this shuffling around and attempts to be clever. You’d rather they tell a good story instead of trying to be cute, which includes a scene where a CG Constantine does a song and dance number. Most of the charm of the Muppets is that they’re not high-tech, that they’re controlled by actual people, and made out of felt. They’re part mop part puppet, for Christ’s sake, it doesn’t get more lo-fi than that. They’re not supposed to be soft-shoeing around and doing acrobatic flips. We have every other computer-animated movie for that nonsense, here it’s misplaced, awkward, and off-putting.

“Most Wanted” takes far too long to figure out what exactly it wants to do, but that doesn’t mean it never gets there. By the time Kermit directs a Siberian gulag dance number where the inmates include Ray Liota, Danny Trejo, and a professional dwarf wrestler, the film finally hits its stride. This is where the “Most Wanted” comes together, when the story becomes about the usual gang rather than the nefarious villains. Walter, the new Muppet introduced in the last movie, finally realizes that something is wrong. Tina Fey and Ty Burrell both turn up in fun supporting roles, as the gulag warden and a bumbling Interpol agent, respectively. And you’re finally on board.

Though “Most Wanted” never reaches the heights of the last installment in the franchise, it does largely become the movie you want it to be. It’s fun enough, touching enough, and by the end, you realize that, even though you had to wade and wait through a lackluster beginning, the result is a reasonably enjoyable Muppet adventure. Not the star of the franchise, “Muppets Most Wanted” is still far better than most family films out there, and is definitely one you can still enjoy right alongside your kids.

Posted by Brent McKnight at 8:57 PM