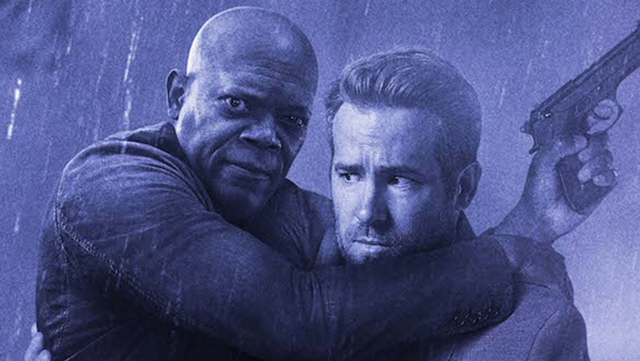 I have way more complicated feelings about The Hitman’s Bodyguard than I initially expected. On one hand, it’s a modestly entertaining 1980s style action throwback about two-mismatched bros in the vein of Lethal Weapon, Beverly Hills Cop, 48 hrs., and really any movie of that era where a white dude and a black dude—one stuffy, one impetuous—team up. And it delivers a fair approximation of those movies.

On the other, it’s a pseudo buddy road trip lark about two unrepentant killers on their way to take down a war criminal who watches like an amalgam of Donald Trump and Vladimir Putin. I’m tempted to refer to him a Putump because his real name doesn’t matter—he’s just a generic, Russian-ish villain. 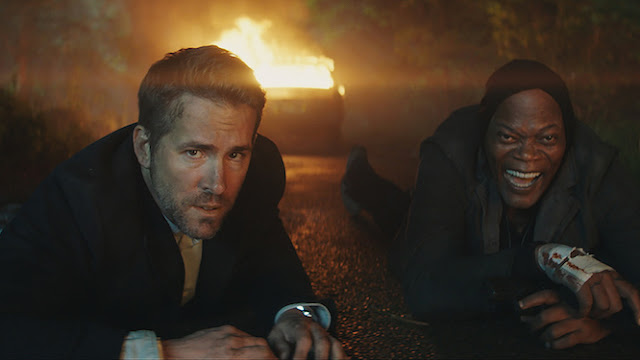 If all of this sounds like a weird mishmash of tones that hopscotches between light comedy to brutal, John Wick-light head-shooting action, that’s pretty much what you get. And it’s as occasionally fun and occasionally awkward as you might imagine.

Here’s the short version: Michael Bryce (Ryan Reynolds) is an executive protector, a fancy term for private bodyguard. He’s tasked with transporting notorious assassin Darius Kincaid (Samuel L. Jackson) to The Hague to testify against Belarusian president-slash-genocidal-maniac Validislav Dukhovic (Gary Oldman) in a war crimes trial. I’m fairly certain his name is only Dukhovic so Samuel L. Jackson can refer to him as “Dookieman” at one point. 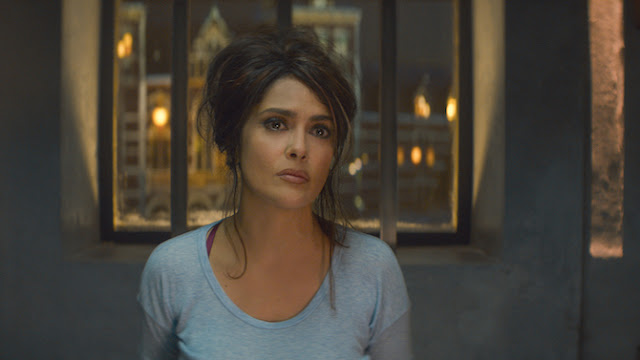 But there’s also an insane amount of other stuff going on. Bryce was once hot shit in his chosen field, but has fallen on hard times after losing a client. He blames former love interest and Interpol agent, Amelia Roussel (Elodie Young), for his downfall. BTW, she’s also the one who drops Kincaid in Bryce’s care. For his part, Kincaid has his own weird romantic angle, as he only agrees to go along with the program to free his wife, Sonia (Salma Hayek), who’s imprisoned despite being innocent of any actual crime. Then you’ve got scowling goons, leaks at Interpol, and a convoluted mess of subplots and side adventures.

Buried somewhere in the bloated 118-minute corpse of The Hitman’s Bodyguard there’s an entertaining enough 93-minute actioner. Anyone who’s watched a movie produced the ‘80s has seen this before, but director Patrick Hughes (The Expendables 3) does what he sets out to do in competent fashion. It’s patently absurd, but in a way that’s engaging at times. Or at least it would if there wasn’t so much filler. 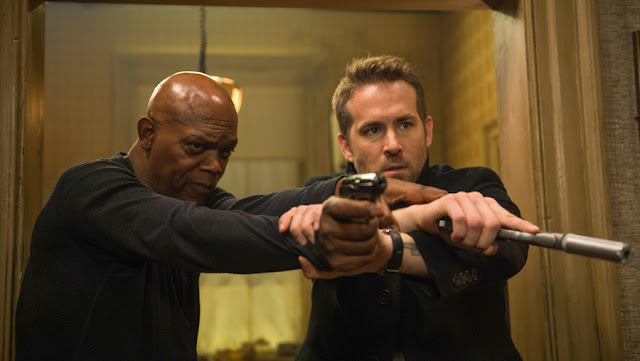 As it is, the film takes too long at every turn. It takes forever to the damn narrative point, and even individual scenes lingers far longer than necessary. Imagine Ryan Reynolds and Samuel L. Jackson—as themselves, not as characters, they don’t try to do anything beyond their usual shtick—bantering back and forth in various modes of transportation, occasionally stopping to kill some villains. You have that in your head? Good, because that’s The Hitman’s Bodyguard in the proverbial nutshell.

That’s the film’s greatest strength. It leans hard on the charm of its leads and coasts by on their chemistry—even if their chemistry isn’t as earnest or as clever as it thinks. But that’s also it’s Achilles heel. Because Hughes and company rely so heavily on this, the stars have too long a leash. It reminds me of heavily improvised comedies—think anything involving Judd Apatow or Paul Feig—where filmmakers keep bits because they’re funny but they wind up detrimental to the overall movie. While the two stars do their thing, that’s all they do, and after a while it wears out its welcome. 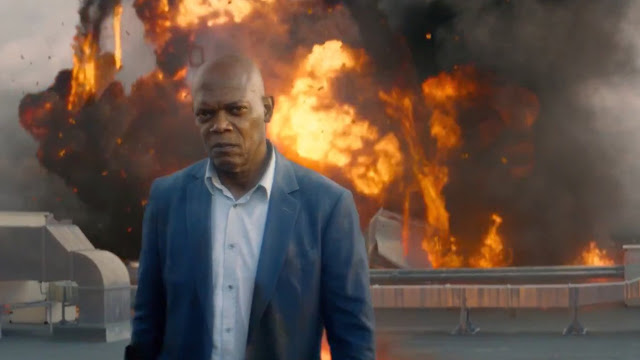 At various points, both Bryce and Kincaid hit pause to moralize their life choices and create shades of gray. Or at least try. Kincaid paints himself as a kind of white knight who only kills bad guys, despite having offed 250 people and never substantiating his claims to being anything but a murderer. For his part, Bryce explains his sins away as killing people while protecting his clients doesn’t really count as killing people. An ill-fated attempt to create nuance and moral ambiguity, it doesn’t work. At all. And is one of many instances where Tom O’Connor’s script tries to questionably juxtapose humor and seriousness—no matter how grim it tries to be, again including war crimes, Samuel L. Jackson is always ready to drop a “motherfucker” to clumsily lighten the mood. To paraphrase Bryce, it almost ruins the word motherfucker entirely.

Like the rest of The Hitman’s Bodyguard, the action presents a mixed bag, though it skews more toward the positive side. The hand-to-hand fights scenes rely too heavily on close-ups, shaky camera work, and quick edits, though one extended throwdown in a hardware store manages to be both inventive and brutal. It’s in an extended, over-the-top car chase where the action peaks. There’s a frenetic energy as cars, motorcycles, and a boat, zip through the streets and canals of Amsterdam, an energy that’s often absent elsewhere. 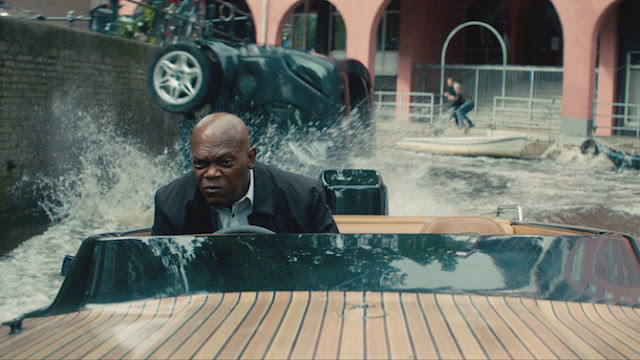 The individual pieces of The Hitman’s Bodyguard aren’t terrible. On their own, they all kind of work. Even the romantic threads—both Kincaid and Bryce get flashbacks that explore the origins of their respective romantic entanglements. And while they’re narratively misplaced pace killers, they’re the most legitimately emotional moments in the entire film.

The problem is these elements never mesh into a cohesive picture. It slides by for a time on the shared charisma of Samuel L. Jackson and Ryan Reynolds, but that only goes so far. Ultimately, it grinds to a halt under the weight of extraneous bullshit. Entertaining in spurts, overlong to a fault, and a total tonal mess, The Hitman’s Bodyguard provides a momentary distraction, nothing more, and departs leaving little impression. [Grade: C]