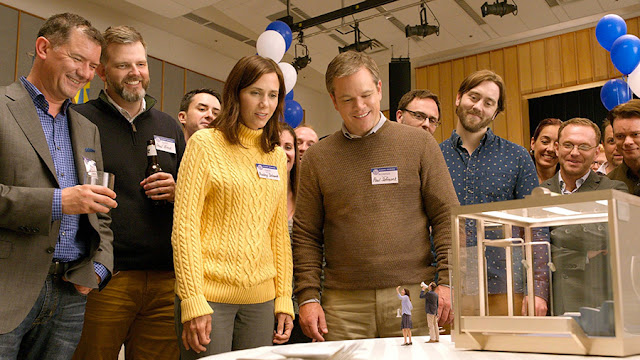 Shows about tiny houses are all the rage on deep-dive cable home improvement channels. But Alexander Payne’s Downsizing takes that to a whole new level. It’s one of my most anticipated movies still to come in 2017, and it just premiered at the Venice Film Festival. To mark the occasion, we also have a short burst of footage to look at.

The plot revolves around Matt Damon and Kristen Wiig shrinking themselves as a solution to global overcrowding, which is more or less all the plot we get in this first glimpse. And of course it uses the Talking Heads’ “Once in a Lifetime,” one of most overused songs in movie trailers. It fits, but come on, you couldn’t find any other track?

There’s not much to this, but I’m pretty jazzed anyway. We’ll likely get more soon, as this is just a tease for the full trailer, which drops on September 9.

Here’s the official synopsis, which also doesn’t offer much in the way of information:

When scientists discover how to shrink humans to five inches tall as a solution to over-population, Paul (Matt Damon) and his wife Audrey (Kristen Wiig) decide to abandon their stressed lives in order to get small and move to a new downsized community — a choice that triggers life-changing adventures.

I know Alexander Payne is supposed to be a raging dick and all, but I adore Election, and coming off of Nebraska and working with a science fiction premise, there are definite reasons why I’m looking forward to Downsizing.

It also has a fantastic cast, even if it is going to be another white people finding themselves movie. Fronted by Damon and Wiig, it also stars Christoph Waltz, Jason Sudeikis, Laura Dern, Neil Patrick Harris, Niecy Nash, Udo Kier, Joaquim de Almeida, and Hong Chau.

Though it’s making the fall festival rounds, the rest of us still have a while to wait. Downsizing opens right in the middle of Star Wars: The Last Jedi mania, on December 22.
Posted by Brent McKnight at 8:14 AM