'You Were Never Really Here' Trailer: Joaquin Phoenix And Lynne Ramsay Team Up For Revenge 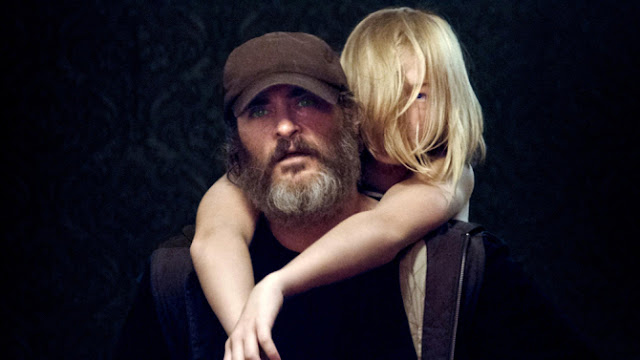 Lynne Ramsay (Ratcatcher, We Need to Talk About Kevin) hadn’t even finished her latest film, You Were Never Really Here, before bringing it to Cannes earlier this year. But it still managed to win Joaquin Phoenix a Best Actor award and tie for Best Screenplay with Yorgos Lanthimos’ Killing of a Sacred Deer. At this point, it doesn’t appear that it’s going to hit any of the fall film festivals, but as the international release date creeps up, there’s an incredible new trailer.

This trailer for You Were Never Really Here dropped yesterday afternoon and I didn’t have time/motivation to write about it. But it stuck with me all night, and I can’t haven’t been able to shake it since.

It’s bleak and grim and haunting. And there appear to be very good reasons why this keeps garnering comparisons to Taxi Driver. Whoa baby, this is about as intense as trailers get. And that score from Radiohead’s Jonny Greenwood, who worked with Ramsay on Kevin and frequently collaborates with Paul Thomas Anderson. I don’t even like Radiohead, but damn, his film work is top tier.

Based on Jonathan Ames’ novel of the same name, You Were Never Really Here follows Joe (Phoenix), an ex-Marine/ex-FBI agent who exists solely to retrieve children from sex traffickers and enact dire retribution upon the villains. His favorite tool is apparently a hammer. A New York politician hires Joe to use his very specific skill set to rescue his young daughter from a brothel and things get even more complicated.

A missing teenage girl. A brutal and tormented enforcer on a rescue mission. Corrupt power and vengeance unleash a storm of violence that may lead to his awakening.

There’s not much to that description, but damn if it’s not promising. And Ramsay is not a filmmaker known to shy away from punishing, confrontational, uncomfortable cinema, so audiences are likely in for a wild ride.

You Were Never Really Here rolls out in international markets starting in October and November. There’s no domestic release slated at the moment, but Amazon picked up the rights. Given their awards season success last year with Manchester by the Sea, it’s a safe bet that they’ll try to get this one in front of voting eyeballs before the deadlines.
Posted by Brent McKnight at 8:53 AM