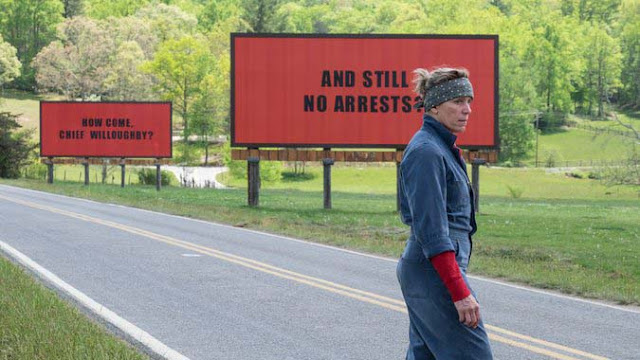 People are complicated creatures. We’re all capable of cruelty and kindness, anger and compassion. Everyone’s part good, everyone’s part shit. It’s this internal dichotomy that drives Martin McDonagh’s pitch-black comedy/drama Three Billboards Outside Ebbing, Missouri, and it’s why his characters are more complex and authentic than those we often find on screen. They’re brutally flawed, but devastatingly human. It doesn’t hurt that the phenomenal cast all give career best performances, or at least damn close.

Mildred Hayes (Frances McDormand) lives in, you guessed it, Ebbing, Missouri. She’s divorced, a single mother, a domestic abuse survivor, and as tough as they come. She’s also grieving the loss of her teenage daughter, who was raped, set on fire, and murdered. The police, led by Sheriff Bill Willoughby (Woody Harrelson), still haven’t caught anyone seven months later, and to remind them, Mildred commissions the titular billboards to keep them on task. In sequence, they read, “Raped while dying,” “And still no arrests,” “How come, Chief Willoughby?” This chess move sets off a firestorm in their rural hamlet and stirs up more than she ever intended. 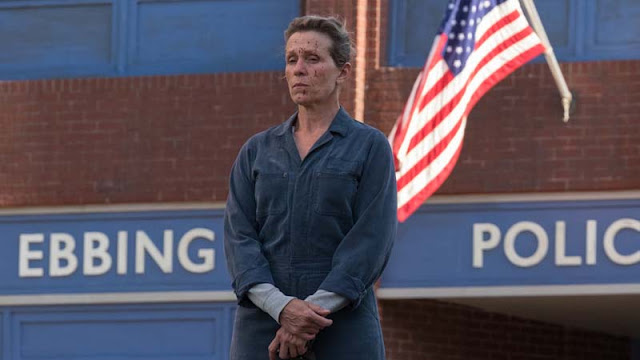 Despite the hook, Three Billboards’ primary concern is the people. This isn’t a mystery to unravel. We don’t follow Mildred as she pieces together clues the cops missed to solve the case and deliver justice. McDonagh’s script and sure-handed direction lights the fuse and watches the town scramble.

McDormand burns with a righteous fire throughout, and she deserves every stich of acclaim she’s received—in a fantastic career, this still stands out as a fearless highlight. Mildred is a crusader on a quest for justice and fighting the good fight. She stands up to bullies of all stripes and remains steadfast and uncompromising. 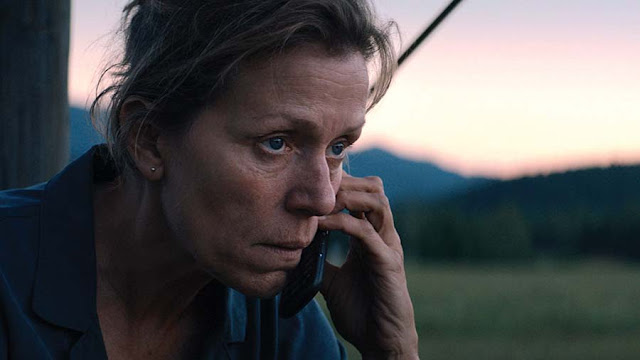 But her passion also blinds her—or at least numbs her—to the damage she causes. She forces her exacerbated, unwilling son (Lucas Hedges) to relive the trauma he’s also still working through; her best friend/boss gets arrested out of retaliation; she faces threats, scorn, and assault; and the community tears itself apart. But she’s like a stoic frontier gunslinger, unable and unwilling to back down once she heads down this path.

Part of what makes Three Billboards so frustrating, and so frustratingly real, is that while we back Mildred, we also know there’s nothing Willoughby can do. This isn’t a case of neglect, indifference, or incompetence. No one missed evidence or swept vital information under the rug. They collected every clue they could find; they simply didn’t lead anywhere. Willoughby’s fighting his own health battles, and we see how much his inability to deliver closure for Mildred pains him. Harrelson is snarky and charming, impatient and frustrated, but also deeply empathetic and relatable. 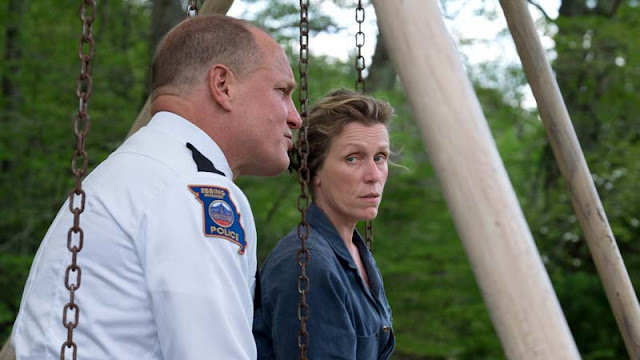 The greatest feat McDonagh pulls off is creating characters that aren’t easy but are still compelling. You can’t simply love them or hate them, or immediately pigeonhole them as one thing or another. This goes from Mildred and Willoughby, and straight on down the line. The town views James (Peter Dinklage) as the local dwarf who wants to get in Mildred’s pants, but in a scant handful of scenes, he proves much more. Mildred’s abusive ex, Charlie (John Hawkes), is capable of a wider range. Even his 19-year-old girlfriend (Samara Weaving), mostly played for laughs, has a moment that reveals unexpected depth. Caleb Landry Jones’ Red alternates between being spineless and weasley and unexpectedly brave and kind. Despite the traditional movie industry age gap, Abbie Cornish adds well-wrought pathos to Anne, Willoughby’s wife—likely the most one-note character, she still feels real.

No one is just what they appear at first glance, and no character embodies that fact more than Jason Dixon (Sam Rockwell). A violent, dim-witted, hot-headed, racist cop, he comes perilously close to being a redneck cartoon. But as despicable as he is, and Dixon’s plenty despicable, it’s impossible to completely write off. He ends up the messiest, most intricate, problematic character in the movie, save Mildred. 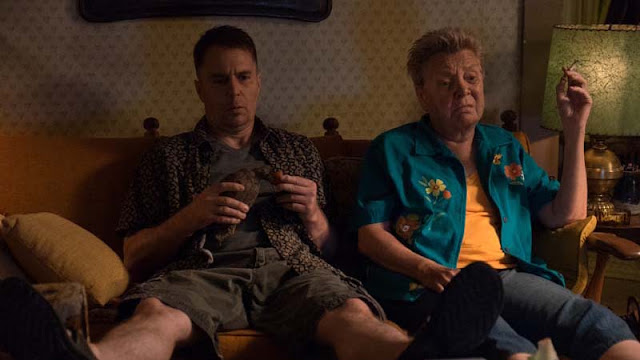 Maybe we don’t like these people; maybe we can’t bring ourselves to root for them, at least not all the time. But goddamn if they’re not all fascinating to behold. Even Dixon’s mother (Sandy Martin), a controlling, unrepentant bigot, isn’t without redemptive features—not redemption, not by a long shot, I’m not sure anyone here is worthy of, earns, or even wants redemption. But again, there’s also more than initially meets the eye. She loves her son best she knows how, which makes her much more interesting to watch than a character we can dismiss outright.

Without exception, these are people who’ve been through the ringer. In one scene in particular, when Charlie confronts Mildred about the billboards, he flips over a table and chokes her against a wall. A situation their son intervenes in by putting a large kitchen knife to his father’s throat. A casual air permeates this moment of domestic violence, like it’s all routine. This isn’t the first such spat. In the time it takes father and son to nonchalantly right the fallen table, all three brush it off and move on, though at the same time it leaves an indelible mark. 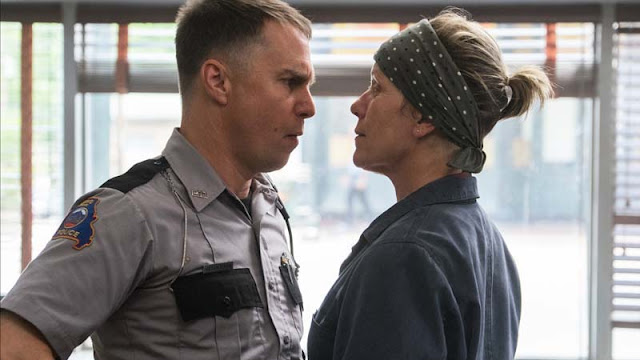 Three Billboards is a collection of balancing acts. McDonagh strikes and maintains a delicate interaction between dark, uncomfortable comedy and eviscerating, biting drama. He somehow makes a story about a mother out to avenge her daughter who was raped, incinerated, and killed, really damn funny. I’m not entirely sure how—I watched it happen and still have no clue how he pulls it off. He finds humor in unlikely place, but never sacrifices gravity for levity, or laughs for emotion. Though very different, the only apt comparison I can come up with is the Coen Brothers. It’s so easy to lose control in these situations—look no further than George Clooney’s dreadful Coens-aping Suburbicon—when it works, it’s that much more impressive.

Three Billboards Outside Ebbing, Missouri isn’t for everyone—one couple walked out of my screening during a particularly heated bout of racist banter, and I get it, it’s rough. For all the humor, there’s not a single moment that doesn’t carry the significant weight of of the subject. It’s not always easy or pleasant, and it’s not a movie to passively observe. McDonagh confronts the audience and gets right in our faces. He asks us to sympathize with terrible people and to occasionally dislike our heroes. It’s messy, ugly, and raw at the same time it’s authentic, earnest, and moving. [Grade: A]

Posted by Brent McKnight at 9:32 AM