'Rampage' Trailer: Dwayne Johnson And A Giant Gorilla, Wolf, And Crocodile. What More Do You Need? 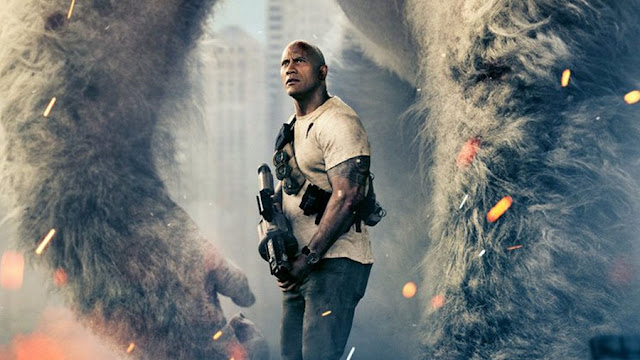 You know, sometimes I look at a certain movie and I think, “Did I make that?” Because I’m fairly certain I’m the only one who could possibly want to see it. And that’s the sensation I get watching the first trailer for Rampage. It stars Dwayne Johnson and a giant gorilla, a giant wolf, and a giant crocodile. And based on this first look, it’s already the greatest video game movie ever made.

If you think this Rampage trailer looks like San Andreas with monsters, you’re not alone. Because that’s precisely what it looks like. I’m sure there’s more to this. I mean, there has to be a plot, right? But does it really matter? Going out on a limb, I’m going to say no. I’m just glad they finally found someone for the Rock to fight that may present a challenge. Just saying, he’s a big dude.

Should you desperately want more information about Rampage and the intricate, nuanced story I’m sure it contains, take a gander at this absurdly long plot synopsis:

Primatologist Davis Okoye (Johnson), a man who keeps people at a distance, shares an unshakable bond with George, the extraordinarily intelligent, silverback gorilla who has been in his care since birth. But a rogue genetic experiment gone awry mutates this gentle ape into a raging creature of enormous size. To make matters worse, it’s soon discovered there are other similarly altered animals. As these newly created alpha predators tear across North America, destroying everything in their path, Okoye teams with a discredited genetic engineer to secure an antidote, fighting his way through an ever-changing battlefield, not only to halt a global catastrophe but to save the fearsome creature that was once his friend. “Rampage” also stars Oscar nominee Naomie Harris (“Moonlight”), Malin Akerman (TV’s “Billions”), Jake Lacy (TV’s “Girls”), Joe Manganiello (TV’s “True Blood”) and Jeffrey Dean Morgan (TV’s “The Walking Dead”); as well as P.J. Byrne (“The Wolf of Wall Street”), Marley Shelton (“Solace”), Breanne Hill (“San Andreas”), Jack Quaid (“The Hunger Games: Catching Fire”), and Matt Gerald (TV’s “Daredevil”).

Of course Rampage opens on April 20, 2018. I don’t even smoke weed, but I still want to light one up, sink back into a stadium theater seat, and watch The Rock punch giant monsters in the face on 4/20. You know that happens.
Posted by Brent McKnight at 1:42 PM

The Rock has numerous movies heading to theaters in the near future. Beyond that, he has attached his name to various projects, all of which sound like they will keep the one-time wrestler and current big-screen phenom in the blockbuster business for years. Because we know that you love The Rock as much as we love The Rock, we've documented the actor's next films.