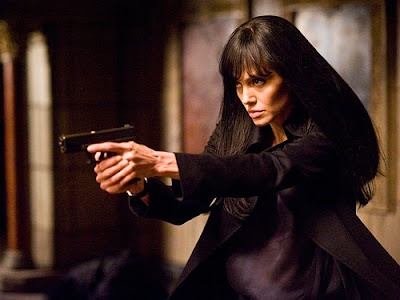 Wait a minute. The bad guys in “Salt” are Cold War era Russians? Really? I kind of like that. I kind of like that a lot. They’re throwback villains that take me back to the movies of my youth where the Russians were like the default setting for cinematic evildoers. It’s an interesting choice for an action film in 2010, but I’m behind it.


“Salt” has things that work for it, but it also has things working against it. I’ve always thought Angelina Jolie is passable as an action star. She’s not totally badass, but I don’t avoid an action movie just because she’s in it, and this is no exception. She plays Evelyn Salt, a CIA agent who specializes Russia. When a defector walks into the agency’s secret front and says a Soviet sleeper agent named Evelyn Salt will try to kill the Russian president, all hell breaks loose, and Salt is forced to run for it. Her nemesis, Agent Peabody (Chiwetel Ejiofor), and her partner, Ted Winter (Liev Schreiber), give chase.
One of the two biggest problems with “Salt” is that Kurt Wimmer’s script thinks it is way more intelligent than it is. The story tries to be part “Manchurian Candidate”, part “Mission: Impossible”, and part “James Bond”, and there are obvious elements lifted from all of those, and more. Then there are the endless, needless twists. She’s good, she’s bad, she’s a patriot, she’s a sleeper agent, you know, you don’t know, you stop caring. The attempts to be mysterious are obvious, and tedious, and after a while they feel like they’re lifted directly from a how-to-write-plot-twists manual. At it’s best, “Salt” is nothing more than a decent action movie, but it pretends to be something much more.
Add to that a clunky love story that is supposed to justify Salt’s ultimate decision, but doesn’t, and you start to get frustrated. The script makes the assumption that any love interest, no matter how underdeveloped, is enough to turn the tide of a lifetime of conditioning and preparation. It’s far too easy.
The second issue is one that a lot of modern action movies have. For an action movie, director Phillip Noyce shows a shockingly small amount of the action. There is an extended chase scene early on where the majority of the shots are close ups on Salt as she flees, juxtaposed with shots of Schreiber and Ejiofor as they pursue her. Instead of letting the action play out onscreen, most of it is blocked out by the confines of the frame, or completely cut up into dozens of little pieces. For instance, one time when Salt leaps to safety, a simple, single jump takes four edits. In reality it is nothing more than a series of flashes that tricks your mind into thinking it saw someone do something.
While I have a problem with being sheltered from witnessing action like this, there is still enough to “Salt” to make it worth a look. There is a sequence where she hops from the top of one moving truck to another, over and over again, like everyone’s favorite pixilated amphibian in an adrenaline-fueled game of “Frogger”. And there is a scene where, shackled, Salt wraps her chains around a dude’s neck, and throws herself over a railing to choke him. That’s pretty badass.
“Salt” may not be as smart as it wants to be, and there are some enormous problems with the script and the direction, but if you go in looking for an entertaining action flick, and not an elaborate psychological mind-fuck, then it is worth watching. It’s fast enough to propel you past some of the potholes, and it is an enjoyable movie, but nothing more than that.
Posted by Brent McKnight at 2:30 PM