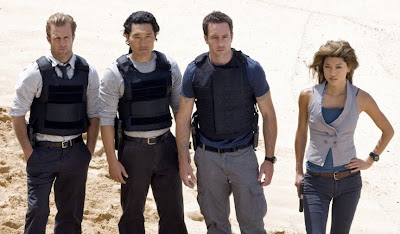 “Hawaii Five-0” was actually kind of good. Not like “Justified” good, but given the incredibly low expectations I had going in, the first episode was a pleasant surprise.


Len Wiseman, who is responsible for most of the “Underworld” movies, as well as “Live Free or Die Hard”, directed the pilot episode, and it definitely has that big-budget action movie feel. Creators Roberto Orci and Alex Kurtzman of “Fringe” fame, along with other creator Peter M. Lenkov (who wrote “Demolition Man”!) know what their audience wants, and don’t waste any time getting there. Within the first four minutes there are helicopters, terrorists, explosions, gun battles, torture, AND William Sadler. I was hooked before the credits even rolled. I’m simple folk.
Steve McGarrett (Alex O’Loughlin) is a military specialist who hunts down terrorists and other bad guys. When you meet him he’s just captured one (Norman Reedus), a major arms dealer. He gets a phone call from the bad guy’s brother, also a bad guy, who is holding McGarrett’s father (William Sadler) hostage. There is an ambush and Terrorist One winds up dead. Consequently Terrorist Two shoots William Sadler in the head. So much for my hopes that he would be a regular character.
McGarrett goes to Hawaii to bury his father, who was a decorated cop, and the governor of the state (Jean Smart) makes him an offer he can’t refuse. She will essentially give him carte blanche to head up a special task force to hunt down his father’s murderer and others of his ilk. She wants the terrorist scum out of her little island paradise.
Detective Danny “Dano” Williams (Scott Caan) just transferred to Hawaii from New Jersey. He hates the beach and sun, and likes cities with skyscrapers, but he moved to be close to his daughter. His ex-wife (when she calls Dano’s phone the ringtone is the music from “Psycho”) married some rich asshole. He’s the type of guy who always has to one-up the actual father. For example, the kid likes rabbits, so Dano buys her a giant stuffed rabbit, but before he can give it to her, step dad gives her a real bunny, which of course trumps any stuffed creature. It’s that kind of situation. If you’ve watched many movies you’re well aware of the type.
Dano is new to the island, an outsider with no hope of solving anything, and he is the one assigned to the McGarrett murder, a clear indication that someone is not interested in seeing this case cleared.
McGarrett and Dano reluctantly team up, and through their head butting banter develop a begrudging respect for each other. No matter what they think of the other on a personal level, they’re both good at their job. Joining them on their merry way is Chin Ho Kelly (Daniel Dae Kim), a disgraced ex-cop who was accused of taking bribes, though McGarrett’s father always had his back, and his cousin Kona (Grace Park, who spends most of her time on screen in a bikini or her underwear), a rookie, who is a feminized version of Kono from the original series.
There is a ton of action, some good back and forth, and even with all of the exposition and back-story necessary in a pilot, the dialogue never gets too out of control. O’Loughlin isn’t much of an actor, which will probably become an issue as the show progresses, but for now you can overlook that, and Caan, Park, and Kim are all solid. Caan is most likely going to run away with the spotlight. The chemistry between the main cadre of actors works well, and you can see how it will drive the story further down the line. And even if something is bothersome, you never have to wait long for another moment of action or eye candy. In this single episode there are multiple gunfights, both of the protagonists get pretty fucked up, and there is some quality hand-to-hand combat. Not to mention a few solid tough guy lines that I won’t ruin for you.
After a single episode the show has promise, and, for now at least, I’ll keep watching.
One thing that I appreciate is that the creators help onto the distinctive, original theme song. They kept it simple, cashing in some nostalgia points to be sure, but I appreciate that nod to the source material.
Posted by Brent McKnight at 11:39 AM