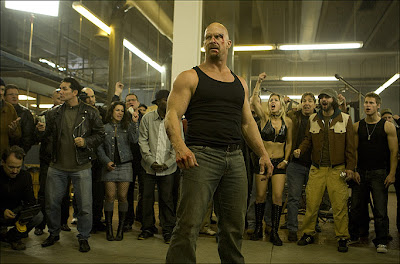 I’m a sucker for movies starring professional wrestlers. I have been since Hulk Hogan popped up in “Rocky III”. “No Holds Barred” and “They Live” only solidified it a few years later. I don’t claim that they’re all good, but, especially in recent days, they tend to be of a genre that I enjoy, chiefly low budget action that is driven by one central badass. They’re throwbacks to the 80s when it was assumed that the toughest guy in the room was automatically the biggest. Guys like Stallone or Schwarzenegger would have played these parts back in the day.


Out of the current crop of wrestling superstars kicking ass and taking names, The Rock has had the most success, having transcended his squared circle notoriety and become a big-time action star. He even got most of us to refer to him by his actual name. That’s no small feat. John Cena has his moments in “The Marine”, but his acting chops are too negligible to be taken too seriously, and he’s too baby faced to be taken seriously as a real tough guy.
Stone Cold Steve Austin on the other hand. That dude is awesome. He just looks like he’ll beat your ass and enjoy it, which is a quality I look for in my action heroes—if he met me, would he slap me? He has a mean sounding voice, and an I-don’t-take-no-shit kind of attitude. In addition to being a hulking beast-man, Austin has one of those faces that lets him play good guys and bad guys with equal ease. He can play a smaller part and make them memorable, like in “The Expendables”, but he can also carry a movie, like with “The Stranger” or “The Condemned” (which I totally liked the first time I saw it, but on subsequent viewings I realized how awful it really is, with the exception of Austin). And his characters always have ridiculous names like Paine, Jake Cage, and Hugo Panzer.
In “Damage” Austin again proves that he can power an entire movie, and have a silly sounding tough guy name. John Brickner (Austin) served four years in a Washington prison for manslaughter, and now that he’s out he just wants to keep his head down and try to fix his life. He’s got a shitty construction job for an asshole boss who rips him off because he’s a ex-con, and one night, alone at a bar drinking a beer, he bounces some entitled rich guy turd (you can tell he’s an entitled rich guy turd just by looking at him) who is hassling sexy-lady waitress Frankie (Laura Vandervoort, who looks like some creepy mix of Christina Ricci and Charlize Theron). This leads to a second job, and also brings him to the attention of Reno (Walton Goggins), Frankie’s boyfriend, a small time con artist slash underground fight promoter.
Reno offers Brickner some fights, but he declines. He’s not looking to get rich; he just wants to stay right. This is hard to do, however, because Veronica (Lynda Boyd) tracks him down. She was the wife of the man Brickner killed, and also wrote the letter to the parole board that got him out. Her eight-year-old daughter needs a heart transplant, and they need $250,000 to get it. She helped spring Brickner so he could get the money for her, and the only way he can do that is to take Reno up on his offer and start fighting. That’s the twist, from the set up you assume “Damage” is going to be a revenge movie, but instead he’s fighting to save a little girl.
Austin is good as the guy who just wants to be left alone, but who has no choice. His motives are pure, but he’s still a badass who says awesome shit like, “What you know about me could fit in the crack of my ass,” and “Don’t let the door hit ya where the good lord split ya.” Killing a man changed him, it haunts him, and he assumes, will follow him for the rest of his life. I like my heroes strong, silent, and tormented by their pasts. Goggins, who I love more and more every time I see him, takes what could have been stereotypical part of the fast-talking bullshit artist who doesn’t know when to shut up and is in debt to some bad people, and makes it fun, and at the same time gives it a surprising emotional depth. He may be a bug-eyed weirdo, but the man can act his ass off. Vandervoort and Boyd are also both really good as the damaged waitress and the mother driven to the brink, respectively.
The performances are really what save “Damage” from being generic. It is a pretty standard plot, almost the same as “Blood and Bone”, and Jean-Claude Van Damme made this movie at least four times that I can think of (“Lionheart”, “The Quest”, “Bloodsport”, “Kickboxer”, “Street Fighter”, okay, I was wrong, he made this movie at least five times).
Bucking the recent trend of movies seeking to capitalize on the popularity of MMA, the fighters in “Damage” aren’t portrayed as highly skilled warriors, they’re barroom brawlers and street fighters, and the fights reflect that. They’re just two big dudes throwing down, and while I can appreciate that, the fights get a bit samey after awhile. But the fights all seem to have little themes. There is a “dog match”, where angry dogs are tied up around the fighters and serve as a de facto fence, and another where instead of a fence they have an octagon of cars. There is also the obligatory fight in the bottom of an empty swimming pool, which is my favorite.
“Damage” gets its name from the damage that each character carries. As the Deacon (Donnelly Rhodes), the elder statesman of underground fighting, says, everyone has debts. It can be cheesy, and is more than a little formulaic, but it is a solid tough guy action movie. It is worth watching Austin, Goggins, and Vandervoort interact. And Austin is a guy I welcome into the small, but gradually increasing cadre of current movie badasses. He has a lot of promise in that realm, and I think the sky is the limit.
Posted by Brent McKnight at 1:40 PM