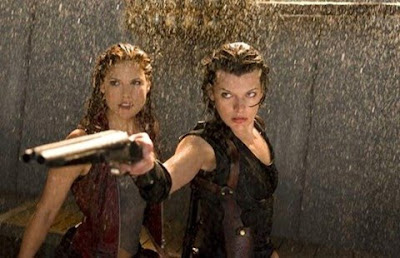 I finally got around to seeing “Resident Evil: Afterlife” the other day, but to be quite honest, it’s taken me a while to write about it because I kind of forgot about it. It wasn’t very good. Not that the other installments in the series were mind-blowing or anything, but this new chapter is the weakest, even though it is by far the most popular and most three-dimensional to date. The whole thing is pretty forgettable.


The movie starts with Alice (Mila Jovovich) wreaking havoc on the underground Tokyo headquarters of the Umbrella Corporation. This is the vengeance she promised at the end of the last film. To be more precise, it is a whole bunch of Alices in black spandex and swords hacking Japanese security guards to bits while director Paul W.S. Anderson throws things at your face. Again, at the end of the last movie she found a bunch of Alice clones to use as her own private army. There are explosions, gunfire, slo-mo, and all the usual bells and whistles.
The real Alice blows up Umbrella HQ, and we jump ahead six months. Alice is flying around in a little World War II era plane, looking for her friends, one of whom is named K-Mart (again, from the previous film) in Alaska. Supposedly there is a city called Arcadia where there is no zombie plague and everything is all hunky dory. When she arrives at the coordinates she finds the helicopter her friends took off in, but no sign of anyone. Actually, that’s not true, she does find Claire (Ali Larter), but she’s been given some drug that makes her forget everything. Disheartened, the two make their way down the west coast, looking for survivors.
In LA a handful of survivors holed up in a prison, surrounded by legions of the undead. Somehow Alice is able to land the plane on the roof. And I’m going to stop writing about this because I’m bored. The story is really generic and bland. They have to find a way to escape, and like any good zombie movie, the zombies aren’t the only monsters they have to worry about. Who saw that coming?
Like I said, I didn’t expect much, but I thought there would be some cool 3D at least. This is the type of movie that I usually enjoy the most in 3D, schlocky, fun horror where random things fly out of the screen for no apparent reason. And there are a couple of cool things, like when Alice sticks her shotgun through a curtain of falling water, but they are few and far between. Roughly half of the movie is in slow motion, which ruins things suddenly shooting at you. It’s just not the same when the axe flying out of the screen is moving really, really slow. You know in cartoons when Bugs Bunny is looking at his watch, tapping his foot, waiting for something to happen? It’s like that.
“Resident Evil: Afterlife” is like MacGruber in that as soon as I walked out of the theater it was completely gone from my consciousness. I felt no need to say anything about it or ever actually think about it again, and I feel like devoting any more of my time to writing about it would be an egregious waste. Hell, I might not even go back and proofread this, so I apologize for any typos and obvious grammatical errors.
Posted by Brent McKnight at 12:44 PM