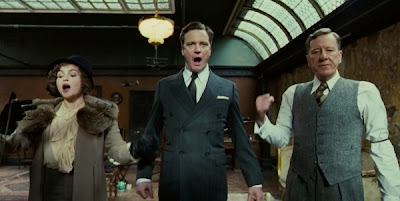 Over the past few months I’ve said many times, in many places, that I’m sure “The King’s Speech” is a wonderfully-acted, well-crafted motion picture, but one that I have absolutely no interest in. So now it’s on DVD and Blu-ray, and I figured, what the hell, I’ll watch anything once, and you know what? “The King’s Speech” is exactly what you expect. It is a wonderfully acted, well-crafted period piece. It practically screams, “Give me an Oscar, sweet baby Jesus I want an Oscar!” And oh my god is it fucking boring. You should take this with a grain of salt, after all my favorite movie of 2010 was “Piranha 3D”, but I imagine most of you who read this site on a regular basis share similar proclivities. Maybe that assumption is incorrect, but I doubt it, and I don’t see what all the fuss is about.


“The King’s Speech” starts out with the Duke of York (Colin Firth), Bertie to his family and friends (except he has no friends), falling on his metaphorical face in front of an enormous audience, and before an even larger audience listening in on one of those newfangled radio machines. See, Bertie has a serious stammer, which is further exacerbated when he gets flustered, like when speaking to a giant throng of devoted followers. He’s tried everything, including smoking cigarettes to relax his esophagus, and speaking with a mouth full of heated marbles.

Bertie’s wife, Elizabeth (Helena Bonham Carter), ever the dutiful spouse, locates Lionel Logue (Geoffrey Rush), a failed Australian actor who has had some purported success curing speech ailments. This is not the kind of place royalty usually hangs. Logue’s office, where he demands they meet, is on a sketchy street in a seedy neighborhood. For crying out loud, the paint is peeling off the wall, the royals have no business being within miles of this place. But Lionel’s combative style, he insists on calling Bertie Bertie instead of Your Royal Highness, yields results, so Bertie keeps on keeping on with the illicit meetings.

The scenes between Firth and Rush are the only things that make “The King’s Speech” worth watching. These are two great actors at the top of their respective games, and their time together invariably turns into the acting equivalent of a cagefight, or at least a jousting match. Firth is especially powerful if you’ve ever tussled with a speech impediment, and at least in the performance realm, the acclaim is warranted. As their unlikely friendship grows and solidifies, it does feel a bit like a romantic comedy, especially when Lionel’s wife discovers the true identity of her husband’s mystery patient.

Unfortunately the entire movie is not just Firth and Rush having a sparring match, and every time the story moves away from those two, “The King’s Speech” becomes bland, toothless, and predictable. It is what you expect it to be, and nothing more. In fact, it’s the exact plot of an up-by-their-bootstraps underdog sports story, complete with a training montage. Only in this instance, the big game is a big speech. The filmmakers take what should be an interesting story and mostly ignore it, or at least deal with it in the most truncated manner. Bertie is third in line to be king, his father dies, and his brother (Guy Pearce) is in love with a married American woman and abdicates the throne, magically transforming Bertie into King George VI (I didn’t know they got to pick their own name) right before the start of World War II.

For a second right before the climax, as Lionel rushes through the streets with Zeppelins hovering overhead and sand bag barricades all over the streets, “The King’s Speech” gets incredibly tense, and you think shit is about to get awesome. Britain is on the brink of war, and WWII was some crazy shit, and then, just when you think things are looking up, bam, all they do is talk. I guess I deserve that. After all, the title does tell you right out of the gate that this movie is about talking, and I shouldn’t expect anything to blow up. That’s one of the biggest problems with “The King’s Speech”, for a movie about power struggles, the looming specter of war, and family intrigue, there isn’t any real tension or conflict, and the stakes never feel high enough. After the fact they try to pretend that the relationship between Bertie and his brother was taut and rigid, that there was some sort of power grab for the throne, but it is never portrayed like that. There’s not even any strife between Bertie and Elizabeth, she is loyal and dutiful and they are very much in love. Like I said, any time the movie moves away from Firth and Rush it gets so painfully dull you want to pop out your eyes with a teaspoon.

Audio Commentary with Director Tom Hooper—Like the movie, Hooper’s commentary is quiet, mannerly, and boring as hell. He speaks in a subdued monotone, and before long I found myself lulled into a state of sleepiness. Included are the usual bits and baubles about production, behind the scenes things, why they chose this angle, why they shot here, and that sort of information. If you’re a big fan of “The King’s Speech”, then you might find what he has to say interesting, but it isn’t particularly engaging.

An Inspirational Story of an Unlikely Friendship—This making-of featurette includes behind the scenes interviews with the writer, director, producers, and actors, and is standard fare. All of people involved talk about the usual things like acting choices, and pump up the film, making seem as important as possible. The most interesting bits are when they place the story in historical context, and talk about the actual King George VI and Lionel Logue.

Q & A With Director and Cast—Emceed by a sycophantic radio host, most of the time here is consumed by everyone trying to be charming, saying really nice things about each other, and complimenting their work on “The King’s Speech”. Helena Bonham Carter, who is wildly underused in the actual film, is fun in a spacey, wing-nut kind of way, and looks more like Bellatrix Lestrange than British royalty. This would have been much better if Geoffrey Rush had been there.

Speeches From the Real King George VI—This juxtaposes two short speeches from the actual King George VI. The first is the one Firth delivers at the end of the film, which he nails syllable-by-syllable. The second speech is from immediately after the war. Comparing the two you see how much progress the King made over a short, but intense period of time. While there are still a few hitches in his giddy up, the later speech is much more fluid and smooth.

The Real Lionel Logue—Logue’s grandson and biographer is interviewed. He talks about how he knew that his grandfather was the King’s speech therapist, but how he didn’t realize what that meant precisely until he unearthed a forgotten box of Logue’s diaries, medals, and official knick-knacks and awards.

The Stuttering Foundation: A Public Service Announcement—This is exactly what it sounds like.
Posted by Brent McKnight at 9:45 AM

Completely agree!!! What a BORING movie, I seriously don't understand what the fuss is about! It seems like people are sheep, they feel they have to praise something which they have remotely heard about, and since it concerns the monarchy, history and everything "good taste", they feel if they don't agree to it being a fabulous movie, they'll be criticized for being ignorant.
Load of bull, I say!

has to be one of the most boring movies in history!