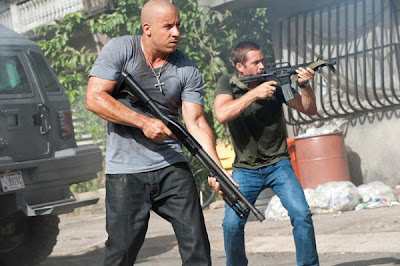 There’s a running theory in my house that The Rock, also known as Dwayne Johnson (sorry buddy, but you’ll always be The Rock to me), and Vin Diesel are actually the same being. Like they’re different versions of the same dude from parallel dimensions, or some sci-fi trope like that. They make similar movies. Couldn’t you imagine Diesel playing the protagonist in “Faster”, or The Rock with silly looking sunglasses bouncing around space in the “Riddick” movies. Even the children’s films they do, like “The Pacifier” (Diesel) and “The Toothfairy” (Rock), could have gone either way. Now before you get your panties in all twisted in a fit of rage and start bombarding the comment section with snarky notes about how I’m obviously a dumbass who has never seen a movie before, I’m just trying to say that I imagine that there are a lot of casting lists in Hollywood with these guys in spots one and two, that’s all.


The latest installment of the “Fast/Furious” franchise, “Fast Five”, perhaps the fastest and most furious thus far in the series, finally brings these two well-muscled action stars together. I was a bit concerned that as soon as they met onscreen that some sort of rupture would appear in the very fabric of our universe, because, as we all know, two versions of the same person from different planes of existence cannot simultaneously occupy the same space. That’s elementary science fiction. Sorry, I’ve been watching a lot of “Fringe” lately, but putting Diesel and The Rock together in a single movie is a bit of a mind-blowing proposition. Going in, I wasn’t sure a single celluloid frame could handle that much man-beef.

“Fast Five” opens with Dom, recently sentenced to life in prison without the possibility of parole. So of course, Brian and Mia break him out in a daring high-speed chase where Brian basically trips a bus. Think about how you would stick your leg out and trip someone, and that’s pretty much what he does, only to a bus, which makes it rad. The trio, now headline-making fugitives, flee to Rio de Janeiro, where Vince lives. Mia finds out she’s pregnant (don’t babies always fuck things up?), they all go on a job that turns bad, and run afoul of Rio’s biggest crime lord (Joaquim de Almeida). Not only that, but Hobbs (The Rock), the biggest, baddest, most cliché spouting federal agent ever, is also hot on their tail. Seriously, Hobbs pretty much just yells lines that Tommy Lee Jones said in “The Fugitive”. He spends every second in the middle of a roid-rage meltdown; sweaty, twitchy, and about to explode his biceps all over the place. At one point he also says that his team had better be wearing their “thunderwear”, so there’s that. Amidst all of this, our anti-heroes have to try to figure out how to steal $100 million dollars so they can all retire in style and freedom.

The story of “Fast Five” is stupid, but it’s the best kind of stupid, and story’s not why you dragged your ass all the way to the theater, is it? You want to see cars driving, guns firing, brawny giants fighting, chase scenes galore, and if a couple of ass shots happen to find their way into the film, that doesn’t hurt the situation any. That’s the foundation the “Fast & Furious” franchise is built upon. The only chink in the otherwise gloriously absurd armor of “Fast Five” is that this time around the producers tried to make a heist film instead of a straight up action film. The pace definitely falters when it tries to be clever (it’s not), and there is a bait and switch move that is straight out of one of the “Ocean’s” movies. But this isn’t much of an issue, because “Fast Five” never takes itself too seriously, and even when it does get melodramatic and emotional, like when Dom and a sexy Brazilian cop bond for a moment over dead loved ones, those moments are so asinine and cheesy that you can’t help but laugh your ass off.

At times “Fast Five” spends too much time building up, and you think the payoff can’t possibly be worth it, but Ramon says things like how his share of the score will mean “a lot of vaginal activity”, so even when it gets slow, it’s never boring. By the time you get to the big climactic scene, you’re ready for an epic chase, and you will not be let down. You haven’t seen cinematic mayhem and destruction since “Bad Boys II”. “Fast Five” wrecks half of Rio in magnificently over-the-top fashion, and, if you go in expecting a movie that is both ridiculous and ridiculously entertaining, you shouldn’t be disappointed. This is the kind of movie where they throw two grenades at you, because one grenade is never enough.
Posted by Brent McKnight at 6:20 PM

Yeah, I'm with you on the Vin Diesel-Dwayne Johnson similarity. Just imagine them in a car, with their hands on the wheel, the camera angle is at the same level as the side mirror, and they both have an attractive woman sitting beside them. Uncanny, isn't it? LOL! Well, it must be the car. It's like they're inseparable from an automobile.