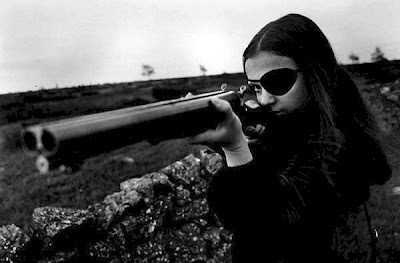 When you think of Sweden you probably imagine the picturesque Scandinavian countryside, universal healthcare, and buxom young blond women, who, at least as portrayed by every sitcom of the 1980, are ditzy and easy. What you may not know, however, is that Sweden also has a long history of underground, sex fueled, out of control sexploitation films. In 1911 Sweden established the world’s first national film censorship board, which set off a century long battle between proprietors of sleaze and mayhem, the public, and the government.


Author Daniel Ekeroth’s (“Swedish Death Metal”) new book, “Swedish Sensationsfilms: A Clandestine History of Sex, Thrillers, And Kicker Cinema”, explores this subculture of depraved, violent, and often questionable films. Ekeroth’s journey spans the decades from 1951, through the sexual revolution of the 60s, the decadence of the 70s and 80s, and into the early 1990s, covering hundreds of movies. These films range from respected classics like Bergman’s “The Virgin Spring” to that most notorious sensationsfilm “Thriller—En Grym Film” (which is a way more appropriate title than the English “A Cruel Picture”, because that movie is way beyond cruel and is fully grim).

There are schlocky “Ghostbusters” knockoffs (“Besökarna”), Sweden’s attempts to enter into the slasher movie sweepstakes (“Blood Tracks”), and forays into 3D (“Champagngalopp”). On these pages pseudo-documentaries mix with light sex romp comedies (“Dagmar’s Hot Panties”), and straight up, hardcore porn. Some are otherwise historical dramas with haphazard smut thrown in seemingly at random. Sensationsfilms may run a wide gamut, but all prominently feature continuing themes of base sexual desires and depravation. All of these films proved controversial and shocking to some degree upon release, and most met with some censorship or banishment. Some, like Ekeroth’s pinnacles of the genre, “Thriller” and “Breaking Point”, still inspire raucous debate today.

Taken individually, Ekeroth’s short, alphabetized reviews of each sensationsfilm are all worth reading. He has a biting, sarcastic tone that is a good match for his subject matter. It is obvious that he is a fan of these films, and that they have greatly influenced his life, but his tongue is also planted firmly in cheek, and though he loves his sensationsfilms, he is well aware that many of them don’t hold up, for entertainment, shock value, or even as erotica, and shouldn’t be watched by anyone. A good place to start is his list of “Twenty sensationsfilms to see before you die”.

While each review stands alone as an interesting snippet, together they create into a greater picture. Each entry places the particular film in a wider historical context. Ekeroth cites popular and critical reaction, and examines the larger impact individual films had, not only on the film industry, but on Swedish culture at large. What “Swedish Sensationsfilms” does is weave loose threads together to create a different image of Sweden than you usually see, offering a unique perspective on both film and culture.

Ekeroth recounts some of the more infamous incidents in Swedish film history. From the sound of things, this was an industry dominated by madcap lunatics and nut jobs. My personal favorite is the story of when actor Per Oscarsson went on a popular variety show. “Instead of singing a nice song, he unexpectedly delivered a lengthy monologue on the subject of how to speak to children about sex. He stripped to his underwear on prime-time television, then removed them to reveal another pair of underwear. As the lecture progressed, he continued to peel off layer after layer of undergarments, in the process shocking the entire nation of Sweden to its core.” Not only was everyone crazy, there were also political elements at work. Sexual expression was definitely at the forefront, but Swedish film also overtly attacked subjects like the Vietnam War (“AWOL”) at a time when Hollywood wouldn’t touch that topic with your dick.

In addition to the hundreds of film summaries, Ekeroth’s book includes a lengthy interview with Christina Lindberg, star of “Thriller”, and face of sensationsfilms, where she recounts her experiences in the industry, including working with actors who went on to great international acclaim, like Stellen Skarsgard. There are dozens of glossy photographs and posters, though you should pause to consider where you’re reading the book, as many of them are large pictures of naked women. You’ve been warned. Ekeroth also adds in a couple essays about Swedish film history, and rogues gallery of the most notorious figures of Swedish film at this time.

“Swedish Sensationsfilms” is a necessary read for aficionados of sleaze looking to expand their world-view of trashy films, but the best part doesn’t even have anything to do with movies. Near the end, Ekeroth includes a “Glossary of Curious Swedish Culture”, which can only be described as brilliant. Here are some samples. “We don’t miss Finland much, though, since it has no natural resources and is inhabited by gloomy, violent, knife-wielding alcoholics.” “Danish is basically Swedish, spoken by an extremely drunk person with a hot potato in his mouth.” “Since the systembolaget [state run liquor stores] stores are few, and closed most of the time (including weekends), Swedes tend to stockpile loads of booze just to be safe. Hedging our bets, we also make a lot of moonshine.” This will make an awesome addition to your movie books collection. 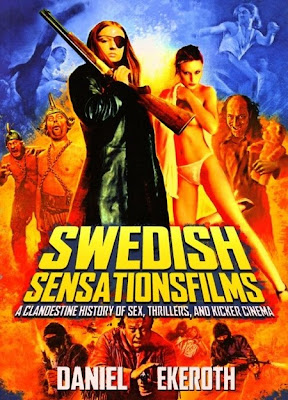 Posted by Brent McKnight at 3:05 PM