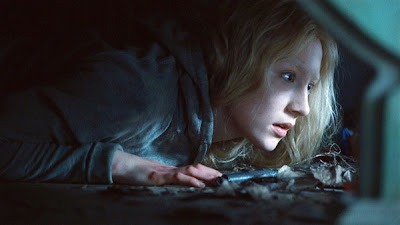 In “Hanna” a young girl, oddly enough named Hanna, lives a simple existence in a cabin in the woods with her doting father. That sounds nice and picturesque, right? Not exactly. The title character (Saoirse Ronan) is a pale, and I mean looks-like-a-ghost pale, 16 year old that lives a life similar to that of an arctic ninja. She hunts with a homemade bow and arrow, chases down wounded animals, and her father, Erik Heller (former stand up comedian Eric Bana), randomly sneaks up and attacks her just to test her reflexes and preparedness. She may be gutting a dead deer, or sound asleep in the middle of the night, it doesn’t matter. He’s likely to spring when least expected, to keep her on her toes, even when unconscious.


Heller is training Hanna for a very specific mission, to kill Marissa Wiegler (Cate Blanchett), a cold, manipulative CIA operative. However, there is a big question, is Hanna being trained to be a tool of her father’s vengeance, or is she being trained so that she can protect herself against unknown dangers that exist for her in the world? Father and daughter knife fight for fun, use antlers for target practice, and train Escrima in the deep winter snow of their remote Finnish home. Heller quizzes her in multiple languages, and drills addresses, dates, times, and a fabricated back-story into her teenage brain. In short, Hanna’s life amounts to one big training montage. While she knows lots of information from books, like the population of Leipzig, Germany, that kissing requires 34 facial muscles working in conjunction, and how to snap a grown man’s neck, she is also incredibly sheltered in many regards. She’s read all about music, but has to ask what it feels like.

Heller gives Hanna a choice. He digs up a tracking device that, once activated, will alert Wiegler of their position. Hanna can flip the switch and activate the beacon if she feels ready, or leave it alone and continue on as before. Being a rebellious teen, she triggers the device, and kicks off a chain of intense action set to a score by the Chemical Brothers. When Hanna is taken into custody by government agents she begins to learn bits of her father’s history as a rogue CIA asset, the truth about the death of her mother, and her own shadowy origins. After killing an agent posing as Wiegler, Hanna escapes from a secure, underground CIA fortress in the middle of the Moroccan desert. Up to this point you know that Hanna is pretty badass, but after watching her dismantle a cadre of highly trained bad guys, you can’t deny how badass she is, plain and simple. She is proficient with firearms, martial arts, and evasive techniques, and has ample opportunity to showcase her skills. This is not your average teenager, this is someone willing to cling to the undercarriage of a Hummer as it bounces over rocky terrain just to make a get away.

Despite the action trappings, “Hanna” is also a quiet, unique coming of age story, a coming of age story that just so happens to include gunfights and international intrigue in addition to raging hormones, discovering friendship, and strained familial relationships. All of the strange growing up moments serve to make the action in “Hanna” that much more awesome. After escaping from the CIA, Hanna makes her way across the map to meet her father, pursued the whole way by a skeevy hitman (Tom Hollander), who runs a burlesque show featuring a bearded midget and a hermaphrodite, and his skinhead sidekicks. Somehow in the middle of all of this, Hanna makes a friend, Sophie (Jessica Barden), and falls in with her hippy clan. Sophie is the bossy, materialistic spawn of overly liberal parents (Olivia Williams and Jason Flemyng), who think letting their children do whatever they want is tantamount to helping them become fully realized human beings. They think it’s just peachy keen that a young, independent woman like Hanna is making her way across Northern Africa by herself.

This is where Hanna really begins to learn about life outside of training and revenge. Sophie is her first friend, and the duo do typical teenage things, like sneak out to meet boys. For the first time in her life Hanna is able to be a kid, and her doe-eyed, babe-in-the-woods routine works for a while. Director Joe Wright does an excellent job of making you see everyday things that you take for granted from Hanna’s perspective. In one particularly strong scene, Hanna gets overwhelmed in a hotel room, unable to deal with the cacophony created when the TV, fluorescent lights, ceiling fan, and electric teakettle all rattle and hum in unison. However, it does get stale after a bit. Luckily, the pace only bogs down for a moment, and Wright picks things up.

Visually, “Hanna” employs unique settings and architecture to great effect. There is an elevated river, an abandoned amusement park/dinosaur graveyard, and a house where giant glass mushrooms dangle from the ceiling, just to name a few. The framing and settings keep you on your toes and never let you sit back into an easy comfort, keeping you engrossed and on the edge of your seat, even in subtle moments. “Run Lola, Run” springs to mind as a reference point for the action scenes, but that might just be due to the techno score and prominence of shots of a young woman running very fast. The “Bourne” movies are also an apt comparison in that regard, but Wright brings his own sensibilities to the action. The quiet moments are definitely akin to his other films, like “Atonement”. “Hanna” is a unique, often strange take on both an action film and a growing up story, and damn entertaining to boot.
Posted by Brent McKnight at 3:44 PM