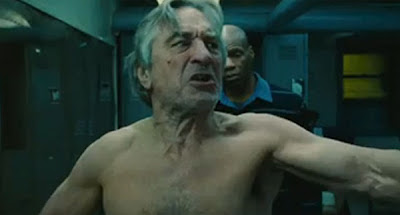 Based on Nick Flynn’s acclaimed memoir “Another Bullshit Night in Suck City”, Paul Weitz’s (“American Pie”) latest film bears the uninteresting name “Being Flynn”. The necessity for the name change is obvious—after all, you can’t put swears up on a marquee—but they went from the a great, memorable title to something completely bland and generic. There’s no way a name like “Being Flynn” will offend anyone’s delicate sensibilities, but there is no way it will stick with anyone either. Luckily for you the watering down of the title doesn’t extend to the contents of the memoir.

“Being Flynn” is a film that plumbs the depths of addiction, poverty, family, and ultimately identity, doesn’t pull any punches, and approaches all of these themes from a personal angle that makes them accessible. Intense performances across the board anchor the story of a young man trying to figure out who or what he is, and, at the same time, trying not to become his father.

Paul Dano is Nick Flynn, an aspiring writer who lives in a renovated strip club and spends more time on partying and doomed relationships than on honing his craft. Robert De Niro, as good as he’s been in any role recently, is Nick’s father, John Flynn, an alcoholic cab driver who counts himself among the greatest of American authors. He is Twain, he is Poe, he is Hemingway—at least he thinks he is. John is most present in Nicks’ life as a void, an absence. Through a series of poor choices, John’s life disintegrates, which brings him into the homeless shelter where Nick works.

John’s appearance shoves Nick further and further down a dark path, hastening the son’s downward spiral. The father and son combination, each battling their own respective demons, poses the question of how far you can go to help a drowning family member, even a relative you don’t like very much, before you have to walk away or risk drowning yourself? Nick attempts to help his father—who repeatedly rebuffs any aid—and himself. There are moments of extreme power in “Being Flynn”, like Nick searching for John on the frigid winter streets of Boston, scouring seedy alleyways and sinister parking garages hoping to find his father. Or Nick’s first, faltering attempts to sober up, sitting meekly in a Church-basement Anonymous meeting.

Beyond Dano and De Niro’s outstanding performances, the supporting cast of “Being Flynn” is stellar. Julianne Moore, as Nick’s long-suffering mother, is absolutely heart breaking to watch. She tries to give hope and stability to her young son, abandoned by his father, by providing him a carousel of father figures, and by running herself ragged working multiple jobs. Olivia Thirlby plays Nick’s girlfriend, Denise, who tries to steer him in the right direction. But she has her own inescapable history, and can’t stand to watch his self-destruction as Nick becomes increasingly dependent on drugs and alcohol. The collection of bit players who populate the homeless shelter—especially the incredible Wes Studi as the no nonsense boss and former resident—walk a delicate balance between comic and tragic, hopeful and hopeless, and you know that each one has their own story worthy of its own movie or memoir.

The biggest hitch in “Being Flynn” is the question of whose story this is. Initially it waffles back and forth between Nick and John. You get the point, they’re trying to show the similarities between the two—neither has any real connections and both simply coast through life—but it could have been handled better. “Being Flynn” wants to play up the identity theme, the idea of what makes you, but loses that after a while. The film is stronger for this decision, which lets the story be a story rather than a dense philosophical treatise. While the idea is sound, it is one of those things you can get away with in a 350-page book but not necessarily in a 90-minute movie. When the film backs away and lets Nick try to make sense of his own life while using his father as a mirror, the movie finally comes into itself.

“Being Flynn” is dark and grim and depressing, but not entirely hopeless. It is not always easy to watch, and you feel for Nick as he attempts to come to terms with the deluded, racist blowhard that is his father. In the end everyone’s story remains unfinished, and the best stories are the ones you tell yourself.
Posted by Brent McKnight at 2:12 PM