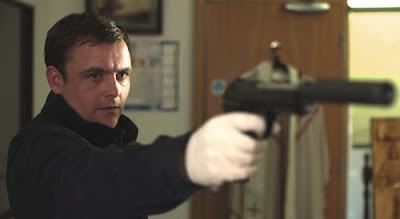 Ben Wheatley’s “Kill List” has been a difficult film to pin down. It’s been getting tons of play on horror sites, but at the same time the basic, couple sentence summary makes it sound like an action movie. There are definite elements of both genres, with a heaping helping of psychological thriller thrown in for good measure. If you cornered me and forced me to stuff it into a single pigeonhole, I’d have to go with that last one. “Kill List” fits into a similar space as movies like “The Shinning” and “Rosemary’s Baby”. I even had twinges of “A Serbian Film” at times. There is an element of the occult, of some sinister, unknown outside force encroaching on the narrative, driving characters closer and closer to the brink of madness.


“Kill List” is more about atmosphere than action. Droning tones rumble underneath the film and create a guttural response, a sense of impending dread that you don’t normally get from watching a couple talk about their finances. This score is cranked up until they almost obscure the dialogue in times of increased tension, and there are moments of near hallucinatory auditory deprivation. Everything takes on threatening overtones. A simple floral pattern on a blanket early on in the movie initially looks like blood spatter when you first see it. Even the most mundane occurrences, like dinner with friends or a morning shave, carry portentous weight and ominous intimations.

Jay (Neil Maskell, who looks like the kid from “The Sopranos” all grown up) is a regular Joe, an out of work family man with money troubles and a wife, Shel (MyAnna Buring) who rides him about every last little thing. She belittles him in front of their friends until the pair is shrieking at each other at a dinner party. When a longtime friend and business partner, Gal (Michael Smiley), shows up with a job offer, Jay finds himself face to face with a lucrative payday.

Did I mention that Jay and Gal are hitmen? That’s an important fact to know, and it colors everything else. As it is laid out, “Kill List” is a domestic drama about an assassin. Eight months ago Jay botched a job in Kiev. You don’t know what happened, but the incident is referred to in hushed, weighted words. Hitmen don’t get L&I or workman’s comp, but I imagine that is the kind of work where you need to have your head in the game, and Jay obviously doesn’t. But he needs the cash—someone has to fix the Jacuzzi after all—and takes Gal’s offer. The job is a trio of hits that, at least on the surface, seem like a walk in the park.

“Kill List” is a movie about killers but not necessarily about killing. More time is spent on small details, like the nice soap in a hotel bathroom, and how even killers fantasize about killing annoying guys playing acoustic guitars in public when all you want to do is eat a meal in peace. Stark brutality and graphic violence increase as Jay and Gal work through their list, but the constant, continually building tension of “Kill List” comes from other factors. As the job progresses, Jay’s mental state unravels, and “Kill List” takes a serious “Apocalypse Now” turn. Jay’s journey becomes a horrific nightmare tumble down the rabbit hole, like a dark, metaphysical acid trip.

Maskell and Smiley, who spend an inordinate amount of time rolling around on the floor kicking the crap out of each other, provide a strong framework for Wheatley, who co-wrote the script with Amy Jump, to build upon. They’re normal guys, going to work, trying to get by, it just so happens that their work involves shooting people in the head. “Kill List” takes them on a misshapen, distorted workaday journey that continually veers off in directions that you don’t expect. Not huge shifts, but unforeseen curves. I’d hazard a guess, however, that if you’re into this sort of film, and pay attention, you’ll be able to figure out the final twist. You may see it coming, but I don’t think that knowledge damages the approach.

“Kill List” is a nice combination of genres, and tells a familiar story from a unique angle. There’s family drama and money trouble, a one-last-job type story, narrative about assassins, fragmented mental states, and, in case all of that isn’t enough, there’s some bizarre cult stuff going on. That sounds like a mess, and easily could have been, but Wheatley handles it well, combining all of these disparate elements into a movie that blurs genre distinctions and defies easy classification. “Kill List” has been so hyped up recently that I made it a point to know as little about the film as possible before I got the chance to see it for myself. While I don’t think it quite lives up to all of the hubbub, it is really good. And though it falls short of being great, it still works as an effective, moody thriller.
Posted by Brent McKnight at 9:09 PM