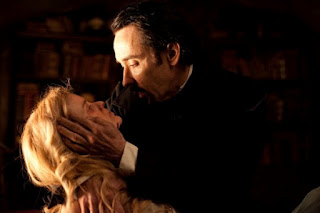 “The Raven” imagines the mysterious final days of Edgar Allen Poe as an action-mystery straight from the pages of the gothic author’s most macabre stories. Director James McTeigue’s film takes this gimmicky bit of revisionist history weaves it into a bland, forgettable movie. There are a few instances of gore that might momentarily sate horror fans, like an early near-decapitation, but very little makes “The Raven” stand out. It is a thoroughly uninteresting film.

Poe (John Cusack), who you first meet in the least imaginative way possible—emerging from heavy Baltimore fog (to poke at a dead cat)—is a gloomy drunk with no money, friends, or prospects. Despite being an antagonistic lovelorn mess who burns every bridge behind him and who never met a drink he didn’t like, Cusack’s Poe is kind of hunky. At least hunky enough to score the affection of Emily Hamilton (Alice Eve), much to the chagrin of her father Captain Hamilton (Brendan Gleason).  Emily is way out of Poe’s league, but she loves him anyway. Did I mention he has a pet raccoon? He does. I wonder if that’s historically accurate.

A series of brutal murders rock the Charm City, and they seem familiar to the also-hunky Detective Fields (Luke Evans). As it turns out the killer is recreating scenes from some of Poe’s more bloody tales. Because of his unique perspective, Poe reluctantly agrees to aid the investigation. His participation in the case ends up putting Lucy in peril and the whole film morphs into cat-and-mouse game of wits between the embattled author and the clever murderer.

“The Raven” is best when Poe, Fields, and company run around from crime scene to crime scent looking for Emily. When it stays there—in conventional action territory—and doesn’t try to be something shrewd or cunning, things are as good as they’re going to get. Too often the story falls into cheap, stilted romance, and glum melodrama that is both tired and annoying.

When “The Raven” tries to be a mystery it fails in a more profound manner. Sure, the characters are trying to solve a mystery, but you don’t get to go along on that particular ride in any meaningful way. There are never any clues for you to follow, no hints at the killer’s identity, no red herrings, not even any actual suspects after the cops rule out Poe himself. The authorities bob along in the killer’s wake from one corpse to the next until the movie decides that’s long enough and delivers you an arbitrary killer with a stale motivation you’ve seen too many times before

“The Raven” is one of those period pieces where everything is way too clean. The dingy bar Poe, penniless and desperate for a taste, stumbles into early on is spotless, despite being full or grimy roustabouts and drunken seamen. Every character has a gleaming white smile (maybe Baltimore was known for proper oral hygiene back in the day), and even when they’re bumbling around in a dark, dank sewer, no one gets so much as a smudge on their cheek. I’m all for suspension of disbelief, but they’re not even trying here. Couldn’t they get an intern or production assistant to rub some dirt on the set pieces, maybe rumple a billowy shirt?

You might be able to forgive the lack of depth of detail if the acting was better. It’s a distraction alright, but not in that way. Cusack is all over the place. He blusters about in his best impression of an affected, underappreciated 19th century genius, then the next moment he sounds like he’s your contemporary. Evans spends the entire movie intensely whispering, like Batman in an old-timey getup. Even when he yells, it’s still somehow a whisper. It’s comical, but not enough to make “The Raven” fun.

This isn’t the worst thing you’ve ever seen, but there is absolutely nothing interesting in this movie. You walk out of the theater and nothing sticks with you any further than the parking lot. It is a completely forgettable experience, and unless you have a huge hard-on for John Cusack, like you need to see every film he’s ever been in, there is no reason for you to watch “The Raven”.
Posted by Brent McKnight at 2:54 PM