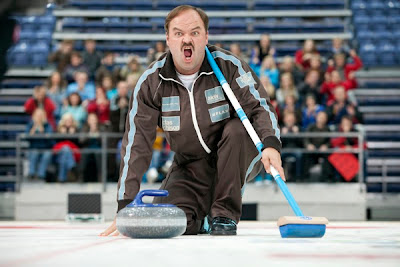 Who out there has always wanted to see a Norwegian curling comedy? Thought so. That’s the precise thrill that Ole Endresen’s film “King Curling” provides. While there are obvious parallels with the Coen Brothers’ “Big Lebowski”, and aesthetic similarities to Wes Anderson’s movies, “King Curling” transcends simple comparison. This film stands alone as a hilarious, heartfelt story of obsession, friendship, and most importantly, sliding a heavy rock across a sheet of ice. Curling may, in fact, be the ultimate in athletic competition.  Superimposing a traditional redemptive sports story onto a sport that most of us know little to nothing about, “King Curling” has a lot of fun twisting and tinkering with every sports cliché in the book.

In the 1990s Truls Paulson (Atle Antonsen) ruled on high over the curling world. Fixated on every last detail, every bit of minutia, Truls becomes mentally unhinged and spends a decade institutionalized in a psychiatric hospital. Upon release he becomes a virtual prisoner of his overbearing wife and her yappy little dog, spending his days avoiding the temptations of his old life and watching a show called “Who On Earth Could Live Here?” To help an ailing friend, Truls must put his sanity, marriage, and freedom on the line by stepping back into the pressure cooker that is the semi-professional Norwegian curling circuit.

Truls gets his old team back together to go after the biggest prize in curling history. His crew is a ridiculous conglomeration that includes a womanizer with a penchant for big girls, a fanatical bird watcher, and a curmudgeon who is unable to sleep because he is haunted by his father’s Rod Stewart impersonations. Each one has his own neuroses, and it’s easy to imagine any of them winding up in Truls’ situation and mental state. They’re an absurd bunch, but they also have an earnest friendship, that makes their spirited back and forth exchanges as engaging as they are funny. Every insult is infused with a sense of camaraderie.

With his bushy mustache and floppy comb over, Antonsen is a perfect schlubby loser. Browbeaten and pushed around, he finally pushes back: against his wife, against his doctors, against the meds that make him unable to curl, and against his cocky rival, who admittedly does conjure up images of Jesus from “The Big Lebowski”. Certainly there are great awkward moments in “King Curling”—including, but not limited to, one of the best not-a-fight scenes you’ll ever see, and an equally impressive pole dance—but is it Truls’ charm and personality that carry the film.

Comedy doesn’t always translate well. There are cultural differences, of course, but even from a simple logistical standpoint it can be difficult to read the subtitles at the same time as you try to pick up inflection, expression, and all the usual cues we use to interpret the data collected while we watch a movie. It is easy for subtleties to fall through the cracks. However, “King Curling” is largely immune to this phenomenon. The humor is broad enough, universal enough, that it vaults over all of these barriers with smoothness and ease. I saw this at the Seattle International Film Festival this year, and if there is any justice in the cinematic world, this will see a wider release.

Delightfully bizarre, this is a film that will appeal to nerdy film fans, but “King Curling” is also accessible enough that it could cross over to a mainstream audience. You can’t help but think this is what it would look like if Wes Anderson made a movie like “Dodgeball”.

Posted by Brent McKnight at 5:44 PM