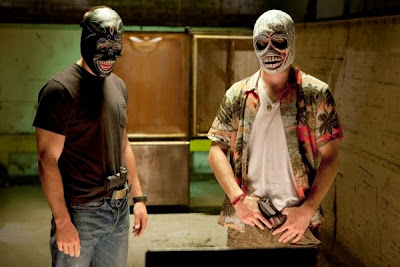 Taylor Kitsch needs a hit like a crackhead. So far this year the “Friday Night Lights” alum has been in “John Carter” and “Battleship”, two of the biggest critical and financial disasters in recent movie history. He needs something to get him out of the gutter. Unfortunately for him, “Savages”, Oliver Stone’s adaptation of Don Winslow’s 2010 novel, won’t be that movie. The Day-Glo film noir is too violent to attract massive mainstream audiences—at times the film edges dangerously near torture porn. Stone has an eye for visual style, there is some striking imagery, but in the end there is very little in the way of substance.

After opening with a camcorder shot of a bunch of frightened hostages, followed by the sound of a chainsaw, “Savages” dives into a wishy-washy voiceover from O (Blake Lively). She proclaims that just because she’s telling this story, doesn’t mean that she’s alive at the end. An attempt to create a metaphysical edge, this kind of indecisiveness permeates the entire film, up to and including one of the most bullshit endings to a movie you’ve ever seen.

O, short for Ophelia, is part of a threesome. She’s in love with two men, best friends and polar opposites Ben (Aaron Johnson, “Kick-Ass”) and Chon (Kitsch). Ben is a peace-loving hippie. Chon is an army vet who misses the action. Ben makes love, Chon has “wargasms”, and this dichotomy defines them. Together they’re supposed to be one perfect man, but you spend most of the film wondering how they’re actually friends. Different personality types can certainly be close, but these two are so contrary that you hardly believe one can stomach the other, let alone run a successful marijuana growing/distribution business together.

When a brutal Mexican drug cartel attempts to bring Ben and Chon’s enterprise under their umbrella, things go south and the trio find themselves in a full-scale battle for survival. The problem is that you don’t actually care about anyone in “Savages”. O is kidnapped, Ben and Chon have to save her by any means necessary—an option Chon enjoys, but that Ben abhors. You’re supposed to believe that their all so in love that the guys are willing to do anything and everything to bring O back, but all you have to rely on is O’s hokey narration that tells you this, because from all appearances they just like to get high and fuck.

The script tries to make characters interesting, and layered, but what it succeeds in doing is making them jumbled, flighty, and inconsistent. Elena (Salma Hayek) heads the cartel. She’s a cold, calculating killer, but also a mother who loves her daughter. Instead of adding complexity to her personality she bounces around from trying to intimidate you to talking to her daughter about horseys. In theory this humanizes her, but it really makes her annoying and significantly less frightening. John Travolta, who looks like a bullfrog these days, plays a crooked DEA agent. He has a wife with cancer. Again, doesn’t make him interesting. He makes a sad face and that’s as far as that goes.

Lado (Benicio Del Toro) is the most legitimately scary villain in the movie. At first. Cold as ice early on, like everything else, he goes wrong and hams it up all the way to the finish. He morphs into a caricature of a bad guy playing both sides, eventually becoming a buffoon. “Savages” tries to be a twisted thriller where everyone has an angle, but it, too, becomes an exaggerated cartoon version of the kind of film it wants to be. After a while “Savages” is hard to take seriously. You wonder if that was the point, but that only makes the whole thing an exercise in futility.

“Savages” wastes too much time introducing minor characters, while it completely neglects others who play similar roles in an arbitrary fashion. For example, you get a complete dossier on Ben and Chon’s accountant Spin (Emile Hirsh), but no one on their team of hackers even has a real name, but are just as important to the story. This is an obvious problem with the translation from page to screen. You can get away with giving everyone a story in a 300-page novel, but even in a movie as overly long as “Savages”, that’s too much. Winslow worked on adapting the script, and you can feel the flourishes he wanted to keep.

On some level the violence of the “Savages” conflicts with the drug. Not the business side of things, selling weed on this scale engenders all manner of nasty consequences. But from a narrative standpoint it feels out of place. Would you really spark a J before jumping into a guerilla style—rocked launchers and IEDs—ambush? If a notoriously brutal gang of thugs is hunting you are you really going to get stoned, pass out, and leave yourself an easy target? Is that the best plan of action? It had to be pot because Ben’s personality wouldn’t work with meth or coke (maybe ecstasy or LSD, but the scale isn’t big enough), but it is an awkward fit.

There is potential in “Savages” for a solid, tough-to-watch crime thriller, but the film never delivers. Instead it winds up a charade, almost a spoof of the kind of movie it claims to be. It wants to push buttons, it wants to incite debate, it wants to have something to say and be more important that it is. But there’s nothing behind it. The torture scenes are simply gratuitous and without purpose (and I’m someone who enjoys excessive violence), the cast makes bad decision after bad decision, and the entire film amounts to very, very little.
Posted by Brent McKnight at 3:10 PM