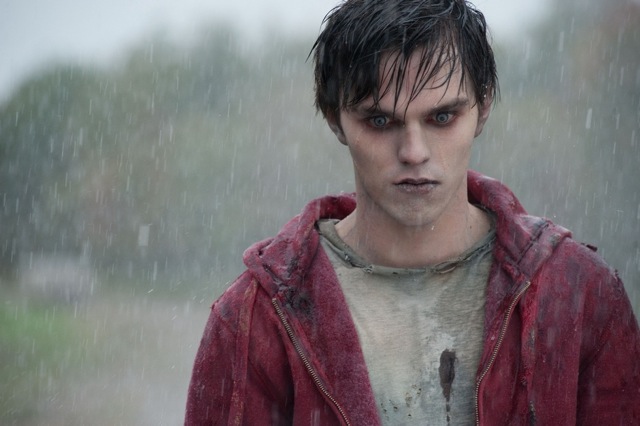 If you can make it through the first part of “Warm Bodies”, and get around the fact that they’re obviously trying to do for zombies what “Twilight” did for vampires—make them sexy, clean, and appealing to crowds of teenage girls in a non-threatening, non-sexual way—then you might enjoy the remainder of the film. You won’t be blown away, but there’s earnestness and certain charm that’s difficult to deny. Before you get to that point, however, the movie is a tedious wreck. And I’ll try to contain my rant on zombies until later in our program. I make no promises, but I will certainly do my best.

Based on the novel of the same name by Isaac Marion, “Warm Bodies” is a retelling of the Romeo and Juliet story, only set in the near future after the zombie apocalypse. On one side you have R (Nicholas Hoult). He’s not your typical undead brain eater. In fact, for a brain dead walking corpse, he has a surprising number of thoughts. Full of existential teen angst (it’s implied that he’s older, but he’s essentially a stock, love-sick high school kid), he shuffles around all day, wishing he could talk to the other zombies he bumps into, and generally feeling alone and worried about what the future holds. You know, normal teen stuff.

Then Julie (Teresa Palmer) shows up. She just so happens to be human. Led by her father, a single-minded zombie killer played by John Malkovich, her people live sequestered away inside of a giant concrete wall that separates her from R’s grabby, rotting folk. Without straining your imagination too much, you can see where this story is going. You’re not super surprised that daddy is less than enthusiastic when his precious little girl brings home one of the walking dead.

In reality R and his ilk are rather innocuous unless they get riled up. Most of their time is spent wandering around, muttering, groaning, and going through the motions of muscle memory. Many of them hang out at an airport because that’s a place people used to wait. But again, R is a different sort of animal. He collects random things that catch his eye, and for a rotting corpse, he has surprising manual dexterity. In fact, he has no problem whatsoever operating the record player he uses for his extensive vinyl collection. Who knew zombies had such an appreciation for Springsteen? Aside from the occasional bout of murderous cranial consumption, he’s just your average, unemployed slacker.

Okay, I can’t hold off the rant any longer. There’s one huge issue with “Warm Bodies”, one that I suspect many other horror fans will also have, and that is, admittedly, hard to get past. What the hell are the doing with the zombies? They’re dead. That is made very clear from the beginning. They have no heartbeat, no moving blood, they don’t need to breathe, and whatever caused them to turn—R suspects a virus, some sort of nuclear bomb, or an escaped radioactive monkey, but they never say—killed them very, very dead. But thoughts, like R clearly has, involve brain function, and the brain dies moments after the heart stops, starved and screaming for oxygen. There go your thoughts, there goes learning, there goes fine motor skills. So there’s that, which we’ll put on the back burner for a moment.

After R and Julie meet—a meeting where he eats her boyfriend’s (Dave Franco) brains, acquires his memories, and falls in love with her via another person’s thoughts, which honestly, makes just as much sense as Romeo and Juliet’s love at first sight—something strange happens. There’s a spark of life, and R gradually becomes human once again. Love heals is the basic point. Actually, R’s love apparently heals all of his kind, everyone except the “Bonies”. They’re the ones who’ve been dead too long, decayed too much, and lost all hope. I guess this makes as much sense as sparkly fucking vampires.

Perhaps Marion’s book deals with this issue, but “Warm Bodies” the movie never does. You could swing a twist like this if the cause of the zombie outbreak is a some sort of affliction that leaves victims in a near comatose stake, if the body goes into a kind of hibernation where all but the most vital functions are cut or greatly slowed, or if most of the brain is dead, but there is still something kicking upstairs. They’re not diseased, however, they’re dead.

In the end it doesn’t matter how, the issue could be justified if properly set up. But it’s not. You’re thrown into this world—a world that relies heavily on your prior knowledge of zombies, using the collective consciousness of zombies to do most of the establishing work—and expected to take it at face value. It’s hugely distracting. Again, this approach resembles “Twilight” in the way that it picks and chooses which bits of the lore it wants to use and expects you to accept and embrace this, while completely disregarding other equally important portions of history.

You can’t have it both ways. You can’t say you know this one thing about zombies from your connection to popular culture, but in the same breath tell the audience to ignore other details that are just as much a part of the mythology. That’s lazy storytelling plain and simple. You can get away with this sort of revisionism, with reinventing and changing the genre, if you put in the heavy lifting and lay the groundwork. “Warm Bodies” never does, and you’re asked to make giant leaps of faith when you have no reason to trust the narrative.

This is a huge part of what derails the early stages of “Warm Bodies”. Listening to R’s sad sack inner monologue as he meanders around and pines over Julie also gets old, quick. If you can last through this, if you can stick it out and accept the situation, then things pick up eventually. “Warm Bodies” will never be a great movie, but it’s cute enough. The love story is endearing and kind of adorable, and R’s smart ass slacker humor is pretty funny, especially in moments where there is a discrepancy between his thoughts and what comes out of his mouth. Once the main push of the story kicks in, the up-tempo pace carries you through to the end.

“Warm Bodies” is light and fluffy horror aimed at an audience that’s only familiar with the genre in a peripheral sense. There are no surprises, but once you get through the rough exterior, the movie has a chewy candy center, and the charm mostly saves the picture. One thing I do appreciate about “Warm Bodies” is that it feels like a one off. I’m sure there will be more books (in fact Marion has announced that he’s working on a sequel, and a prequel novella recently hit bookstores), and if the film is a financial success, you know the studio will squeeze out as many installments as possible. In a day and age where every book, every movie, attempts to establish a new franchise, “Warm Bodies” is a self-contained story, one with a conclusion that is not an obvious lead in to a sequel. That’s something to value.
Posted by Brent McKnight at 6:50 PM