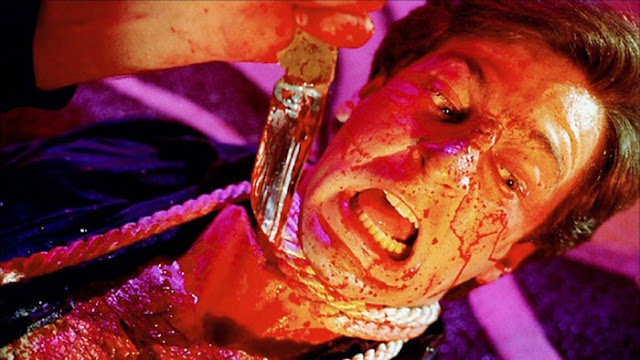 Constructed like a faux-documentary, you know bones of the story. Charles Manson (Marcelo Games) sets himself up as a guru leader of his “family” of young hippie searchers, and steers them on a path of debauchery and violence that leaves seven people dead. One way “The Manson Family” differs from other looks at this historical reality is that Charlie plays a relatively small part, with the primary focus on the individual members of the family. Framed as interviews with family members, video from the time of their arrests are intercut with more recent footage from today. None of this ever took place mind you, but Van Bebber does his best to use filters and color adjustments to make the footage appear authentic, intercutting the escalating story with scenes from family life on the farm.

Along with the dizzy, frantic scenes of chaos and depravity, there is a parallel story. “The Manson Family” envisions a world where Charlie and crew were an inspiration for a modern day Cult of Manson. Essentially it envisions a current version of the family, new young people who glommed on the teachings and lifestyle, and evolved with the times into a natural extension of the original. This attempt to give the story balance is clunky and weak. The present day scenes don’t hold a candle to the day-in-the-life bits, and when you’re there, you can’t wait to get back. Who gives a crap about two old TV producers making a true crime documentary while a bunch of kids fuck and listen to death metal in a basement?

As the actions in the story ratchets up—as the family gets crazier and things get more out of control on the farm, driving you towards the inevitable bloodbath—the film doesn’t match that intensity. While “The Manson Family” starts out frenetic and twisted, in the middle it becomes rather pedestrian, straying from the madness. And for a movie where the main attraction is the bat-shit crazy manic stretches, the rest doesn’t measure up. The movie works best a commentary when it juxtaposes traditional icons of Americana—think patriotic songs and fireworks—with psychedelic nightmare imagery. In no moment is this more apparent than with a red, white, and blue strap on. This sharp focus, however, is quickly lost, usurped by blatant attempts to shock your sensibilities, which it certainly does. The rest feels like classic 70s sleaze and exploitation, and is fun and raunchy enough to please, but it never delves much deeper than the surface, and you can’t help but think it could have been much more.

Severin has put together a loaded disc to celebrate “The Manson Family.” A commentary track with Van Bebber misses the mark somewhat. The story of how the film came to be is interesting—it had been in the works since 1988, and is a true passion project—but the delivery leaves something to be desired. He has this monotone that never changes, and comes across as bored, and he just shuts up for a extended periods, like he’s distracted and has better things to do. You can only take it for so long before you give up. There’s also an extended interview with Phil Anselmo of Pantera fame, which dives into his involvement with “The Manson Family.” He provided both financial help, and provided music and voiceover contributions. Listening to him talk about the film is funny because Anselmo has almost the same issues with it as I do.

There’s a twelve-minute interview with Charles Manson, and excerpt from the film “Charles Manson Superstar,” where he throws all of his followers under the bus, is super combative, and rambles on for a time. He hits on music and politics, among others notes. There are also 14-minutes worth of deleted scenes that are hard to watch. Not for content reasons—if you made it through the movie you’re well prepared for what lies in here—but because they didn’t have the funds to do a proper transfer. What they did instead was play the scenes on a mixing console and film them with a standard, commercial half-inch video camera. They look and sound like you’re watching shitty home movies from the late 1960s.

The biggest extras are two full-length-ish documentaries. “The Van Bebber Family” is 75-minutes of cast and crew interviews. This deals with most of the same topics and subjects as the commentary, but the finished product is much more engaging and entertaining to watch. The enthusiasm everyone involved had for the project really comes through in the interviews. You also get pieces of history of Van Bebber and many of the others. “In the Belly of the Beast” documents the 1997 Fantasia Film Festival, one of the premiere genre fests in the world. You’re up to your eyeballs in horror, sci-fi, exploitation, and every other bit of genre stickiness you can shake a stick at. It features interviews with lots underground filmmakers actors, including, surprise, surprise, Van Bebber.

All in all, this is a solid package, and definitely something to check out for fans of sleaze, exploitations, and glorious cinematic trashiness. You also get the exclusive debut of Van Bebber's new short "Gator Green."
Posted by Brent McKnight at 8:28 PM