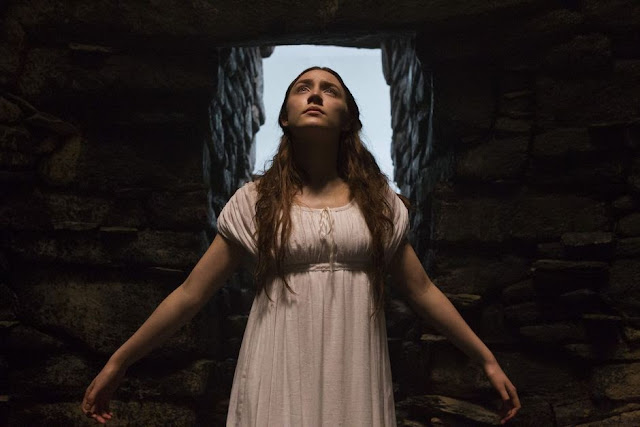 Neil Jordan’s moody new film “Byzantium” is a sprawling, novelistic take on a familiar genre. Not his first horror rodeo, the “Crying Game” director offers up a revisionist approach to a vampire story. His film contains many of the hallmarks you expect—eternal life, themes of undying love, an epic scope that spans historical epochs. While this strategy has enough twists and tweaks so that it fit doesn’t feel like a story you’ve witnessed a thousand times before, the meandering nature is also its biggest drawback. Occasionally bloody and violent, “Byzantium” is primarily a somber tale of a woeful, savage life.


Overlong, and with some unnecessarily in depth asides, “Byzantium” isn’t an action heavy film, opting instead for a quiet, gradual escalation in tension, the metaphorical child of Shelly and Poe. This is Eleanor’s (Saoirse Ronan) story, and though she may be a 200-year-old vampire, she was turned when she was 16, and is still a dramatic adolescent at heart. There’s a ton of heavy, moody gazing, but it’s a much better turn than her recent work in “The Host.” She writes her story over and over again at each stop on her journey, and casts the pages to the wind, unable to share with anyone but her companion, Clara (Gemma Arterton), the one constant in her life.

Described as “morbidly sexy,” Clara is a stripper when we first meet her. While Ronan’s Eleanor is morose and solitary, Arterton’s Clara is wild, outgoing, and delights in her own badness. When the pair flees, they wind up in a rundown seaside town, one they’ve been to before, though Clara doesn’t remember—Eleanor remembers everything, it’s a curse. Eleanor meets bonds with a fellow weirdo, Frank (Caleb Landry Jones), while Clara takes over a ramshackle hotel and turns it into a brothel. This set up allows their opposite personalities to manifest before your eyes. 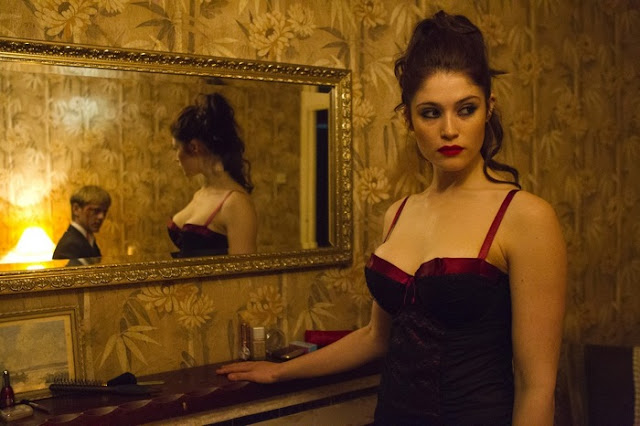 Where the film gets tangled up is in when a story-within-a-story begins to unfold. The tale it tells is strong, revealing Clara’s sad, desolate origins, which involve being sold into the world’s oldest profession by an unscrupulous military officer (Johnny Lee Miller). The problem is that while this is going on the modern day arm story takes a turn into a boring romance between Eleanor and Frank, a spat with child welfare, and some tedious I-hate-you-mom style drama. You bounce between the two narrative threads, but one definitely takes precedence over the other, and the discrepancy between them kills the pace. You get it, Jordan wants to reveal the history of his character, and do it over time, but instead of the two threads playing off of each other thematically, each timeline adding to your knowledge and understanding of the other, you get one interesting story paired with one that’s boring as crap.

The end result is that Byzantium feels very much like a classical novel, in both positive and negative ways. On one hand, there is room to let a story change and evolve, which it does. On the other, the story is in dire need of an editor to trim the excess edges and streamline the entire process. We aren’t talking about a terrible tragedy here, things simply get a bit garbled in the middle, and for a time the tempo crosses that fine line from deliberate and gradual to legitimately slow. This is something that happens in long-winded novels as well, you feel like the writer lost sight of the end goal there for a time, and the story meanders about before finding itself once again.

Posted by Brent McKnight at 5:57 PM