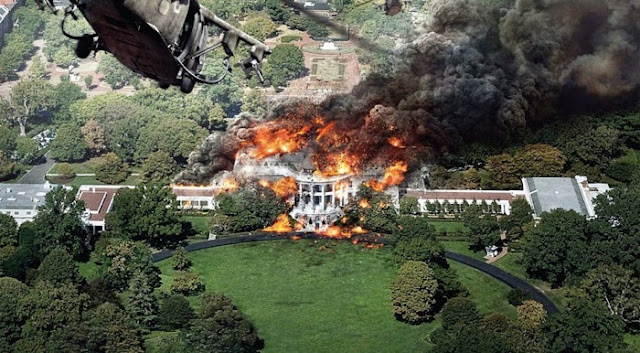 Big, loud, heroic, and fun, Roland Emmerich’s take on “Die Hard in the White House” (the first this year was the more serious “Olympus HasFallen”), “White House Down,” is also bloated, ridiculously violent, and kind of dumb. And all of this is wrapped up in one bombastic package. The film wears its politics on its sleeve, but it’s a jumbled mess of simple, watered down jabs at the right, big business, and the American war machine. I’m as left-leaning as they come, but the way the film goes about trying to have a message is so asinine and rudimentary that you have to wonder why even bother.

Then again, you’re not going into a Roland Emmerich movie looking for deep insight into the current state of the world, are you? After all, this is a man who has cinematically destroyed the world multiple times, and who has a fetish for exploding the White House. The sheer number of times he’s decimated the President’s home has surely landed him on a few watch lists, I’m amazed he can still board an airplane. For all of the myriad problems, “White House Down” is a total blast, and a supped-up, adrenalized throwback to the 80s buddy action flicks that I loved, and still love, growing up. Emmerich knows exactly what movie he’s making, and this, like most of his films, is a wall-to-wall escalation in absurdity.

Overall, the plot is a paint-by-numbers knock off of “Die Hard,” “Under Siege,” and countless other movies where one man, through pure coincidence, in the wrong place at the wrong time, must step up in the face of great odds and defeat a group of well-armed, highly-trained terrorists. In trying to differentiate itself somewhat from this herd, James Vanderbilt’s (“The Amazing Spider-Man,” the “RoboCop” remake) script recycles an arc already used by “NCIS,” hardly a bastion of originality, a few years ago.

Channing Tatum plays John Cale, a Washington DC police officer, estranged husband and father, and all around good-natured schlub who has never seen anything through in his life. His dream is to join the Secret Service and protect President James Sawyer (Jamie Foxx) to impress his daughter Emily (Joey King). She may only be a pre-teen, but she’s a political junkie, and runs a politics-themed blog. On a tour of the Presidential digs—after John flubs a job interview a former pal (Maggie Gyllenhaal)—boom, terrorists, an assortment of stock right wing wacko types, take over. With no other options, John has no choice but to save the day, and his daughter. 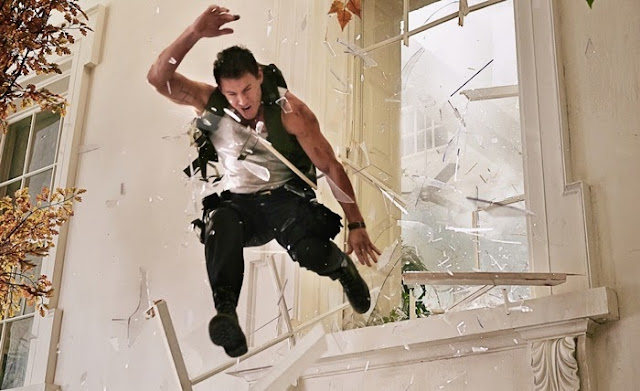 Before long, the situation devolves into a chase scene that resembles a D-derby on the White House lawn, while the president hangs out of the sunroof with a rocket launcher. And it goes even further than that. “White House Down” is like the movie that would have erupted from my giddy twelve-year-old brain. It’s like Emmerich and Vanderbilt travelled back in time and asked pre-adolescent me what he wanted to see in an action movie, and then did exactly what I said. There is all sorts of awesome, but not much in the way of character development, nuance, or storytelling. My younger self hadn’t really grasped the more subtle elements of narrative craft.

We’re talking all go, all the time, without an ounce of subtlety. When the villains shoot up a cabana, of course there’s a giant propane tank that blows the entire place to smithereens. And why would you just run a guy over with an armor plated SUV when you can run him over with an armor plated SUV and blast him with a Gatling gun? For all the brutally violent deaths, explosions, and random automatic weapon fire, “White House Down” sticks to its PG-13 guns, and there is little to no blood to be found. What should cause a geyser of crimson rain barely even leaves a mark. Not even on Cale’s standard issue John McClane tank top.

Then, at some point, as this cop and this President are tear-assing around all over the White House, you realize that the film has become the weirdest buddy-action-comedy in many years. While it’s trying to be “Lethal Weapon,” what you get is more in line with the Jeff Goldblum/Will Smith scenes from “Independence Day.” You’ll laugh, often a great deal, but you’re never sure if you’re because it’s funny, or because it’s the stupidest thing you’ve ever heard. Okay, scratch that, you’re well aware that the characters make idiotic statements at every turn. The real question is whether it’s on purpose or not. You really want this to be intentional; otherwise, it’s just sad when the President of the United States of America beats a guy to death for grabbing his vintage Jordan’s.

Everything about “White House Down” is simple, from the way the plot unfolds—it wants to have a shocking reveal, but it’s so readily apparent that you can’t call it a surprise, and you know the villain as soon as he appears on screen—to the attempt to have a political message. Black and white, good versus evil, there is no room for nuance anywhere in the movie. Big, dumb, and a total throwaway, “White House Down” is also totally fun. It might just be the most perfect movie to watch to celebrate the 4th of July, so much better than “The Lone Ranger.”

Posted by Brent McKnight at 7:21 PM