'This Is The End' Movie Review 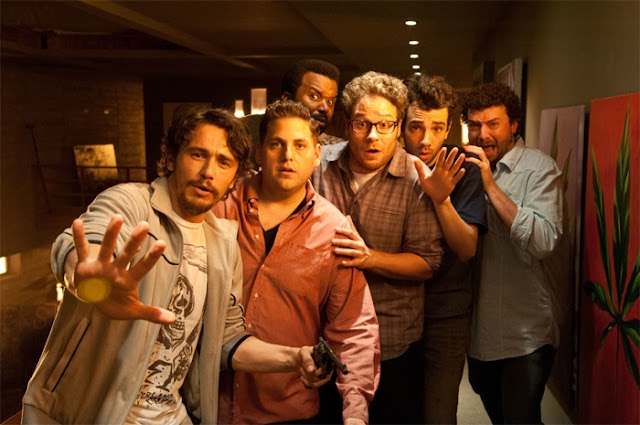 Does watching a bunch of foul-mouthed, weed-smoking, pill-popping celebrities attempt to survive the end of the world sound like a good time? If it does, your summer just took a significant upturn with This is the End, the directorial debut from Seth Rogen and Evan Goldberg, the dynamic duo behind Superbad and Pineapple Express. Not only are we talking about an apocalyptic tale, this is also the vulgar, balls out, R-rated comedy you’ve waiting for. (The Hangover Part III was a miserable failure on that front.) Just because this is exactly what you expect it to be—raunchy, improvised humor—doesn’t make it any less of a freaking blast.

A riff on the public personas of Rogen and a bunch of his young, funny celebrity buddies, the action kicks off with Jay Baruchel arriving in Los Angeles. After a fast-paced weed and videogame montage, Rogen drags his reluctant pal to an epic rager at James Franco’s new digs. There, surrounded by people he hates, Jay has a miserable time as everyone any of these guys has ever been in a movie with acts like an asshole. Michael Cera as a coked out lecherous version of himself is the standout here.

A reworking of the earlier short, Jay and Seth Versus the Apocalypse, before long, shit starts to get real, and the world, for all intents and purposes, takes a huge dump. Bright blue shafts of light come down and suck people into the sky, the Hollywood Hills burst into flames, and the Earth rips open, swallowing up most of the party. After this, you’re left with the core group that you follow through the film—Seth, Jay, Franco, Jonah Hill, Craig Robinson, and Danny McBride—and they barricade themselves inside Franco’s, waiting for a celebrity rescue team. After all, Jonah was nominated for an Oscar. They have to save him, right? Right after they get Clooney. 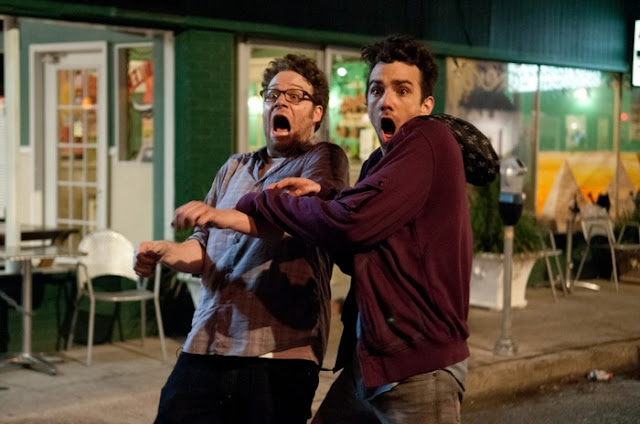 Outside the world is engulfed in fire. It could be aliens, a zombie invasion, an apocalyptic earthquake, maybe even the Book of Revelation come to pass. The particulars don’t matter all that much—aside from some unnamed, barely-seen monsters skulking around—as the bulk of the movie takes place inside, and is comprised of crude, chaotic bits strung together to resemble a loose, offensive Lord of the Flies. In fact, the crew doesn’t even attempt to venture outside of their fortress until necessity absolutely dictates they restock their food and water supplies. Somehow they still have electricity throughout most of This is the End, but we’ll let that one slide.

While it’s nonstop hilarious—I need to go back and watch it again because there are parts I missed when the crowd got super loud—This is the End does wander off for a while in the middle. Pace and momentum are definitely sacrificed for laughs. A continuing hook about decaying friendships serves as the primary emotional arc, and though that ends up being enough to carry you through and satisfy the warm and fuzzy quotient, the film loses sight of it for long stretches.

These are minor digs, and This is the End more than makes up for any dip in momentum with an insane climax and conclusion, but you can’t help but feel that they kept scenes in because they liked them, not because they furthered any larger arc. Then again, you probably aren’t going to see this movie for the intricate narrative, fully formed character arcs, and witty turns of phrase, now are you? You want to see giant demon wangs, and hear James Franco and Danny McBride argue about masturbation. All the talk of self-gratification also seems like an especially apt metaphor for the entire film, no matter how much fun it is.

This is the End tips its cap to everything from Road Warrior and Ghostbusters to The Exorcist and even R. Kelly’s opus Trapped in the Closet. Yeah. The self-deprecating jabs at the inescapable public images of each of the key players is both fun and functional; they’ve all played different versions of the same character so many times that they’ve become stuck in that role, and now their poking fun at themselves for it. The more you enjoy these particular actors, and their specific brand of profane humor, the more you’ll appreciate This is the End. But even if you’re just in the mood for a rowdy, pee drinking good time, you should check it out. And even in a film this full of celebrity, there are some perfect surprise cameos.

Posted by Brent McKnight at 6:07 PM