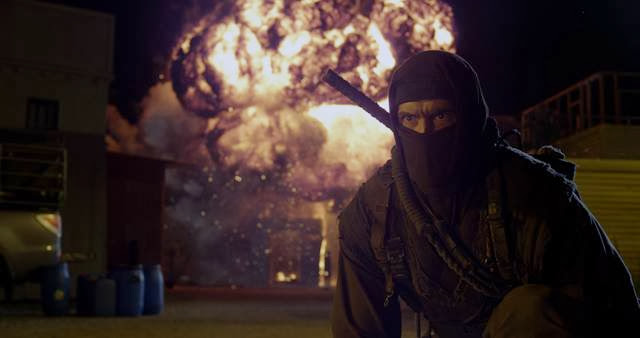 For the most part, my favorite style of action has been relegated to the direct-to-video market. I’m talking about that genre that was prevalent in the 1970s and 80s, where a solitary badass, sometimes with a sidekick, faces down incredible odds in order to get justice and revenge. This is the genre that gave rise to icons like Schwarzenegger, Stallone, Bruce Willis, Chuck Norris, Seagal, and Van Damme. While films of this sort are still alive and well on VOD and DTV, you don’t often see them in theaters, unless they star Jason Statham. The ticket buying public wants spectacle and CGI and giant robots roaming the streets. The reigning king of this action underground is, without a doubt, Scott Adkins. Statham may be more of a draw, but as solid a lone wolf as he is, Adkins kicks so much more ass. (Statham is, admittedly, the better overall dramatic actor.)

Adkins latest, “Ninja: Shadow of a Tear,” aside from the curious subtitle that never makes much sense contextually, is the best straight-up action film of the year. Fans of this style went nuts when the movie debuted at Fantastic Fest, and now that it has finally hit Blu-ray and DVD, you can see what all the fuss was about, and the fuss was about plenty. “Shadow of a Tear” is like Chuck Norris at his prime, skulking around, battling evil Ninjas, on a quest that falls into that messy moral gray area that looks suspiciously like vengeance. There’s less chest hair, but just as many, if not more, incredible fight scenes. Watching Adkins take apart an entire rival dojo in a single epic shot, is hands down the movie fight of 2013.

The plot is simple, but effective. Adkins is back as Casey, the Western martial arts master living and studying in Japan. His life is perfect, he runs is dojo, he’s married to a super awesome lady who also happens to be pregnant; everything’s coming up Casey. He even gives his honey a medallion in the shape of the Japanese symbol for happiness. You know where this is going; things are not going to end well. Casey’s wife if murdered, he finds himself embroiled in a generations-old blood feud, and though he didn’t start the drama, you can be damn sure he plans to finish it, even if he has to travel to jungles of Myanmar in order to accomplish his mission. Story is little more than a delivery system for putting Adkins in situations where he has to pummel bad guys.

“Shadow of a Tear” doesn’t waste any time. All of that plot we just talked about, that takes up approximately the first twelve minutes of the film, and that includes Casey whooping the hell out of two goons who have the misfortune of trying to mug him. This pace is probably for the best, since Adkin’s strong suit is his fighting acumen, and the rest of his performance amounts to a lot of grim-faced man-scowling. He does, however, get to say awesome stone-cold lines. When his pal, played by Kane Kosugi, repeats that old bit of wisdom about a man out for revenge must dig two graves, Casey replies, “They’re going to need a lot more than that.” It warms your heart and brings a smile to your face.

“Shadow of a Tear” embraces its limitations, and puts its best foot forward at damn near every turn. Grieving for his wife, Casey takes it out on an overzealous student, or he gets drunk and starts a bar fight, or walks on fire, or tracks down a notorious drug lord hiding out in the Golden Triangle. Something tough as nails is the point I’m getting at. His sadness takes the form of an explosion of violence, and the film is wall-to-wall brawls. Director Isaac Florentine has the good sense to stand back and let the fighters fight. Long takes, minimal cuts, and legitimate real world badasses combine to deliver the best action sequences you’ll find in any recent title. They put the fights in movies like “The Expendables” to shame.

“Ninja: Shadow of a Tear” owns its pure, old-school aesthetic, and creates a modern B-movie classic. The Blu-ray and DVD don’t come with much in the way of additional material. There’s a quick featurette, some interviews with the key players on the cast and crew, and some general behind-the-scenes stuff, but nothing super impressive or necessary. But that’s okay, you shouldn’t pick this up for the extra anyway, you should add it to your collection so you can watch Scott Adkins beat the holy hell out of fools, and smile like an idiot the whole time.

Posted by Brent McKnight at 6:47 PM